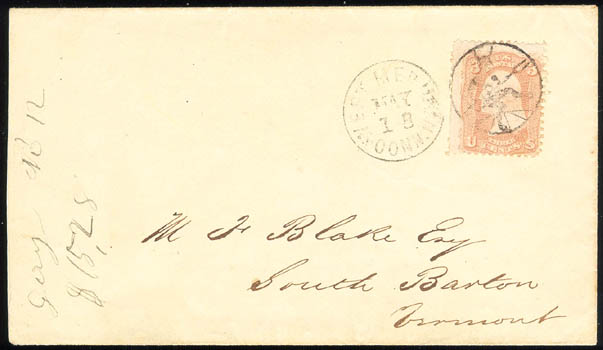 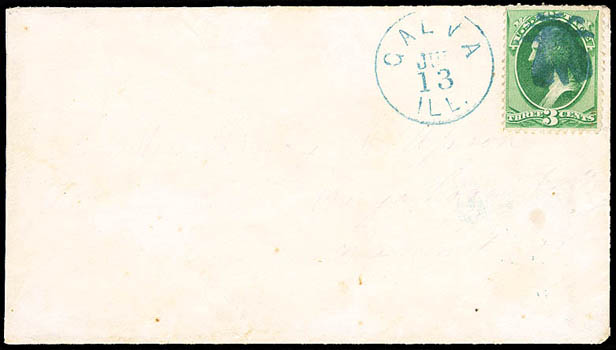 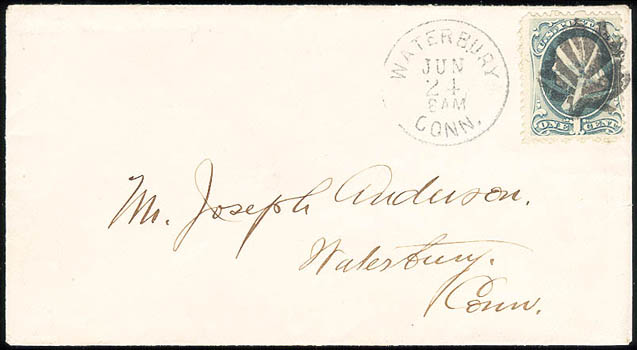 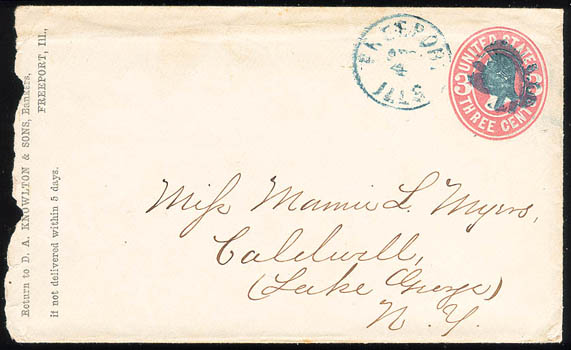 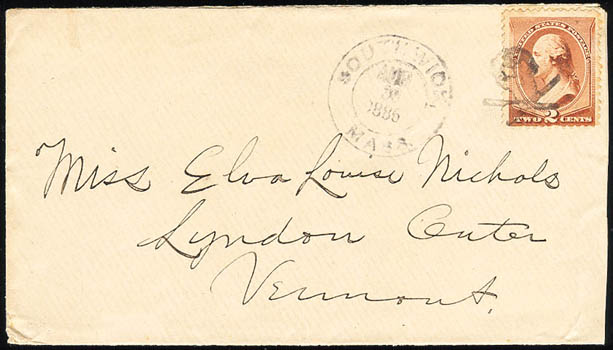 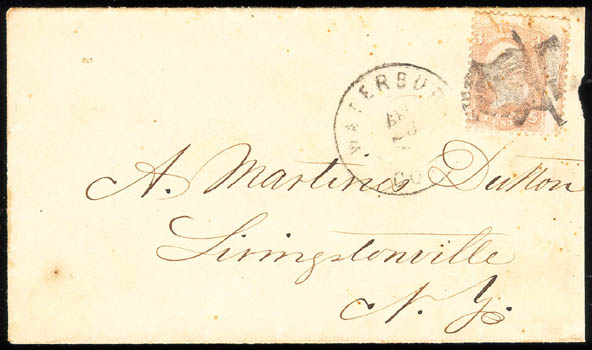 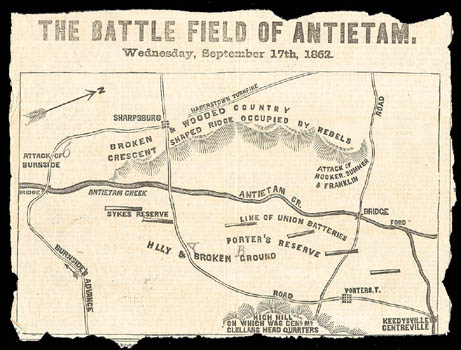 1861-63 Civil War correspondence. A wonderful correspondence of 189 letters and 155 covers all neatly arranged in chronological order from William Byrns, who was an Officer of the 1st Michigan Infantry, Sharpshooters, starting in August of 1861 through November of 1863, many letter with fascinating & historic contents

•     Letters include: datelined "Camp near New Bridge, Va./June 22nd, 1862", "My suspicions proved correct, for at 3 the next morning we were ordered to move. We only went about 2 miles N.E. of Gaines (?) & while one Company & the Guard established the camp, the rest of the Reg. went on Picket at New Bridge. Our Co. was one of two at the outpost. Soon after we had taken our position, one of our pickets was shot. Thigh badly shattered & amputated in the P.M. About 10 the batteries opened - our side began, but after firing a few shots became quite.", etc. with much more contents

•     datelined "Harrisons Bar, James River/July 5, 1862" stating, "When I try to look back over the events of the last 10 days, I can hardly realize that we have passed through such a terrible scene… The Next A.M. we fell back to our position in the rear of Gaines Mill & fought all day against a force five times our number & were obliged to retreat in disorder, but we were reinforced & the enemy driven to their original position.… We were drawn up in the line of battle expecting an attack. I will not try to describe the horror of the past week., but it is enough for me to say that accounts do not exaggerate & that such a terrible struggle was never before witnessed on our continent.", plus much more

•     datelined "Centreville, Va./Sept. 1st, 1862" written, "We fought again on the field of Bull Run on Saturday. We were repulsed. Our Reg. numbers but 150 men & 5 commissioned officers uninjured - I am unhurt but why I cannot tell."

•     datelined "Bank of the Potomac beyond Sharpsburg, Md./Sept. 21st, 1862" with "We have been busy fighting, marching & are a good deal used up. We have beaten the enemy badly, taken many prisoners… The 118th Penn. Vols in our Brigade suffered severely."

•     datelined "Camp Morells Division, Bank of the Potomac/Sept. 23rd, 1862" with original newspaper map of the "Battle Field of Antietam/Wednesday, September 17th, 1862" marked by sender where he was located during the fighting, plus a long descriptive letter of the battle and the events as they unfolded

•     datelined "Camp near Fredericksburg, Va. December 16th, 1862" recounting some of the events at the Battle of Fredericksburg, "Early in the day a Brigade had charged across a field some ¼ a mile or more & lay exposed to a fire from the enemies sharpshooters… The papers will tell you of our great losses & small gains. The loss in our Regt. is about 80 including 7 officers."

•     datelined "Camp near Fredericksburg, Va. December 19th, 1862" which talks of the Battle of Fredericksburg, "Our wounded are generally badly improved. Many of them are hit with Shell which either wound severely or else merely scratch. I do not like to talk of our late action. It reflects little credit upon our arms, though our Army never fought better. I cannot think Gen. Burnside is the one guilty of the great sacrifice, but upon the guilty ones there lies the blood of thousands of our brave men, who died without bettering the cause in which they were engaged."

and the letters goes on & on, highlighted are but a tiny few of the many eloquent historic letters in this great correspondence, virtually all the covers are franked with 1861 3¢ & some have been roughly open affecting adhesive, Fine, a great lot for the Civil War historian!
Estimate    $5,000 - 7,500. 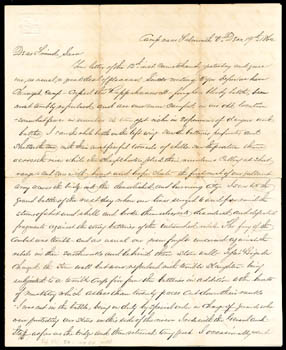 1862 Battle of Fredricksburg war letter. A wonderful & historic letter datelined "Camp near Falmouth, Va./Dec. 19th, 1862" with an eloquent description regarding the Battle of Fredericksburg, "Since writing to you before, we have changed camp - crossed the Rappahannock - fought a bloody battle, been most terribly repulsed and are once more camped in our old location. Somewhat fewer in numbers, tis true, yet rich in the experience of dangers and battles. I saw the whole battle on the left wing - saw the batteries perform and shatter the town with their most fearful tornado of shells - saw the pontoons thrown across the river while the sharpshooters plied their murderous calling at short range - and saw with heart and hope elate the first rush of our gallant Army across the bridge into the demolished and burning City. I saw too the grand battle of the next day when our lines surged to and fro amid the storms of shot and shell and broke themselves into disordered and defeated fragments against the strong batteries of the entrenched rebels. The fury of the combat was terrible - and as usual our men fought uncovered against the rebels in their earthworks and behind their stonewall. Tylers Brigade charged the stonewall but were repulsed with terrible slaughter being subject to a terrible crossfire from the batteries in addition to the bursts of musketry which at less than twenty paces cut down their ranks.", the letter continues, "To say that we were whipped in the late battle would convey a very feeble idea of the magnitude of our diaster. We were slaughtered.", plus much, much more, the letter is severed horizontally along the fold (which may have been done be sender) & is accompanied by a cover with the imprint "Commissary Department/Tyler's Brigade", which appear to be from the same correspondence, but not belonging to the letter, Fine, a wonderful item (the letter has been fully transcribed).
Estimate    $200 - 300. 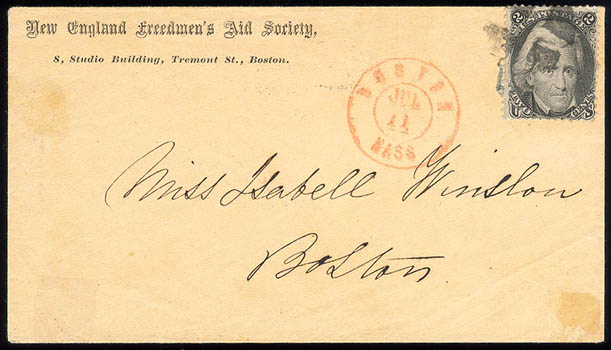 The primary function of the New England Freedmen's Aid Society was to provide an assortment of relief (temporary) services to accommodate slaves who were emancipated by the act of 1862. The slaves' itinerary, for the most part, led them to Massachusetts and into the hands of several sympathetic and charitable whites. The Association's services included temporary housing, the collection and distribution of clothing, food, sundry goods and a job training program.

Harriet Tubman was hired in 1865 by the Society to teach marketable skills to newly freed slave-women in the South.