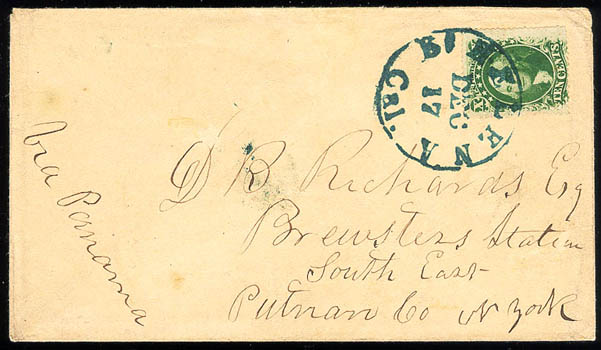 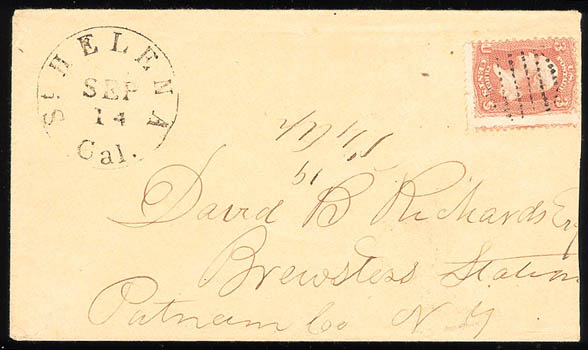 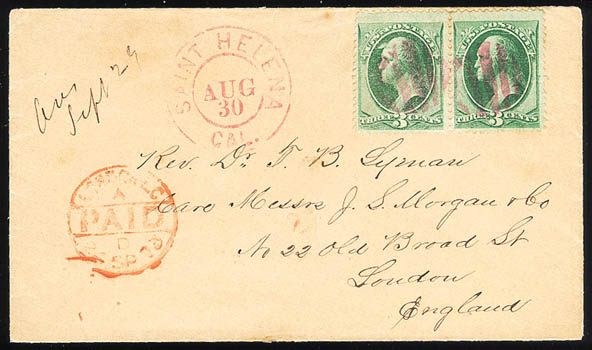 San Benito County Collection. The definitive collection of this county showing virtually every postmark of the county in seven binders, many better covers abound in this collection, a few of the highlights are an entire binder of each, Hollister & San Jaun postmarks (San Jaun including a Wells, Fargo & Co. oval handstamp on an 1853-55 3¢ entire), almost entire binder of San Benito including unlisted manuscript, better individual towns postmarks include Bitter Water, Cook, Emmett (one manuscript & 6 covers with 1st handstamped postmark), Erie (manuscript), Hernandez, Llanada, Mulberry town & county postmark, New Idria, Paicines, Panoche (7 covers with unlisted manuscript postmarks & four with the first handstamped postmark during the period when this Post Office was in Fresno County, prior to being moved into San Benito), Pine Rock, Rex, a large range of Tres Pinos including the earliest known manuscript postmark, plus a few very nice real photo cards, mixed condition with some covers roughly opened, a great lot worth careful examination (no photo).
Estimate    $3,000 - 4,000. 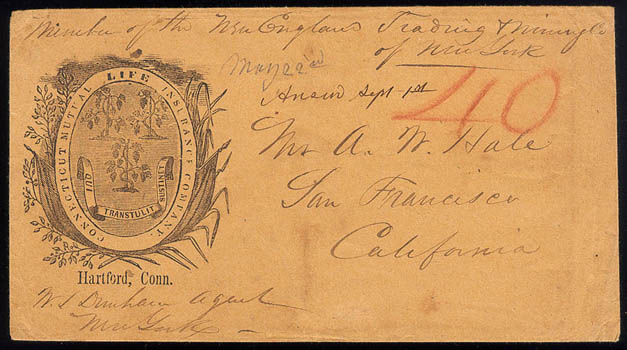 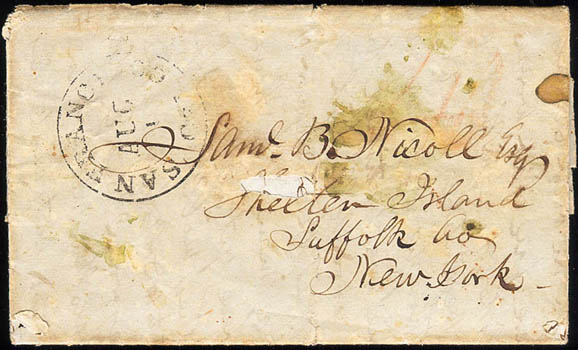 San Francisco, Cal./Aug 1 (San Francisco). Black cds (Williams SAF-260) on folded letter datelined "Sullivans Camp near San Joaquin River, July 4th, 1849" with red crayon manuscript "40" rate to New York, fascinating letter regarding voyage & mining, "San Francisco is a very busy place. There are about 150 houses and as many tents. Goods are left promiscuously about the streets, all being honest - nothing stolen. Gambling and drunkenness predominates. Liquor sells for 4/- a drink, yet there are more drunken men to be seen in the streets than any place in the United States…The gold diggings are all in the borders of the mountains among the hills and resemble the highlands on the North River, there being no rain here between the months of April and November - the rivers get dry in the bed of which they dig for the gold among rocks, roots and stones. They dig from 4 to 16 feet deep until they come to clay, the surface of which they wash and find the gold, principally not larger than a pin's head.", folded letter stained with small hole in address panel & edge faults, Fine, the was the first day of use of the cds postmark in San Francisco & the last day of use of the straight line marking.
Estimate    $200 - 300.

San Francisco, Cal./80 (San Francisco). Red integral rate cds (Williams SAF-270) on double rate 1850 folded letter to Connecticut, datelined "San Francisco Mar. 21, 1850" & crossed out with "Sacramento" added, lengthy letter with interesting contents regarding claims for damages on freight during voyage to California, mentions if the judge is bribed, the condition of the vessel and the stormy weather during the trip, F.-V.F., a rare 80¢ rate cover.
Estimate    $200 - 300. 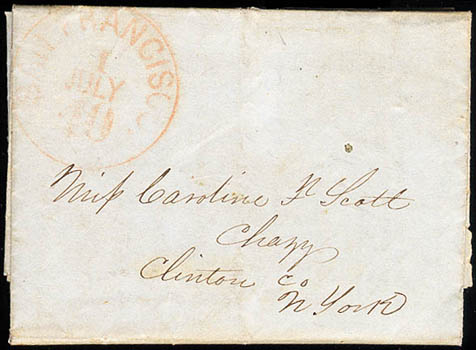 San Francisco, Cal./40 (San Francisco). Red integral rate cds (Williams SAF-290) on 1850 folded letter to New York, datelined "Marysville, June 23, 1850", interesting miner's letter regarding the establishment of a General Store on the South Fork of the Feather River, mining, "…there was a man at work on the South Fork of Feather River about six miles above our store at a place known as Stoney Point, well one day he took out in one pan full of dirt - $2202.50 - now was not that a pretty good days work? …but such diggins are scarce, such pans full are few and far between. I will tell just one more there is a place known as gold run on Deer Creek, a branch of the Yuba, from which one company of four for several days in succession took eleven pounds…", Fine.
Estimate    $150 - 200. 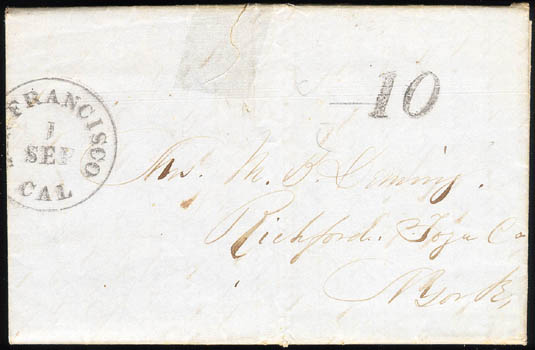 San Francisco, Cal. (San Francisco). Cds (Williams SAF-350) on 1851 folded letter to New York with matching "10" rate handstamp, miner's letter to his sister, "I am, as I wrote Father, now living among the Indians and it is more probable that will be my residence for the next three years…, I am nearly east from Sacramento City about forty miles, where whenever you think of me, you may imagine me surrounded by at least twenty wild savages, all assembled from different rancherias or camps for the purpose making their purchases or to make some request of there 'Minnim Nishiman hook', or grand Indian Captain, as they have learned to call me or for some other equally interesting purpose." plus a lengthy description of the San Francisco fire in 1851 and vivid description of the Vigilance Committee and the hangings performed by them, "There has been a day here almost equal to that of the great fire - crime has been progressing to such an extent and went unpunished so long that the people have at last formed themselves into what they term a Vigilance Committee for the purpose of stopping the progress of crime. They today made a descent upon the Jail and took from it two prisoners and in twenty minutes they were suspended [between] heaven and earth before the gaze of the thousands of the excited multitude. A full account of it you will find in the papers as well as an official hanging at Sacramento of three robbers.", cover tear at top sealed with scotch tape creating stain, Very Fine, a great historical letter.
Estimate    $500 - 750.

The letter refers to the infamous actions taken by the Committee of Vigilance on Aug. 24th, 1851 (the date of this letter), who broke into the San Francisco jailhouse and kidnapped prisoners, S. Whittaker and R. McKenzie, and hanged from the second story of the Committee's rooms. Sam Brannan, the leader of the Committee, addressed the crowd who had gathered after the hangings, stating that the committee could not act otherwise.