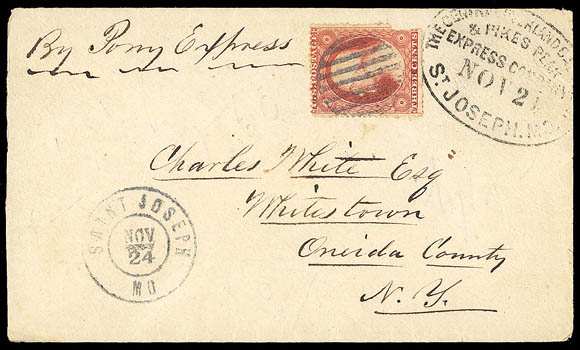 Based on another Pony Express cover postmarked at Saint Joseph on November 24, this Pony Express trip originated in San Francisco on November 10, 1860, and terminated in Saint Joseph late on November 23. The cover was picked up someplace between California and Missouri and the US postage was either unpaid, or paid in cash by the sender. The cover a pencil "1/4" notation under the stamp indicating the sender paid the pony express fees for a letter to one-quarter ounce ($2.50). The letter was received at the Pony Express Office in Saint Joseph and they applied their date stamp on the envelope and attached a 3¢ stamp. The envelope was then delivered to the Saint Joseph Post Office where it received a postal date stamp and the stamp was canceled with a matching grid cancel.

At the starting terminus the envelopes were wrapped in oil skin and placed in one of the four compartments that were part of a saddlebag specially designed to fit over the riding saddle. These compartments were then locked. This saddlebag or mochila as it was called could be quickly transferred from horse to horse. One of the four compartments was used for way mail. Each Home Station manager (about every tenth station) would have a key that would allow only this compartment to be unlocked. At each Home Station envelopes could then be added or removed. Envelopes would be removed and given to the rider for distribution to the stations between that Home Station and the next Home Station down the line. Each Home Station along the route therefore acted as a way station. The other three compartments on the mochila could only be unlocked at the terminus.

This cover is unusual in that the sender did not apply US postage. This may have been due to a lack of stamps on the sender's part or unavailability at the Way Station.

This cover was discovered after the publication of "The Pony Express" by Frajola, Kramer and Walske. In discussion with the authors it was established that this cover would have been placed in a position between E39 and E40. 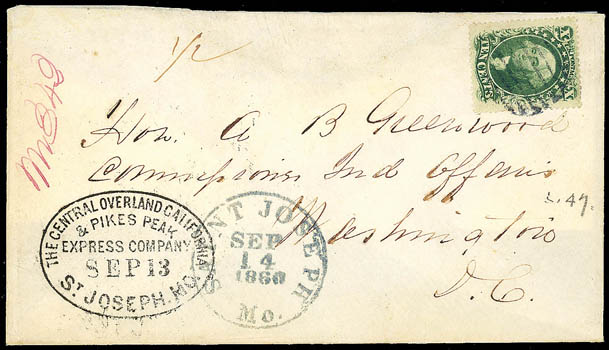 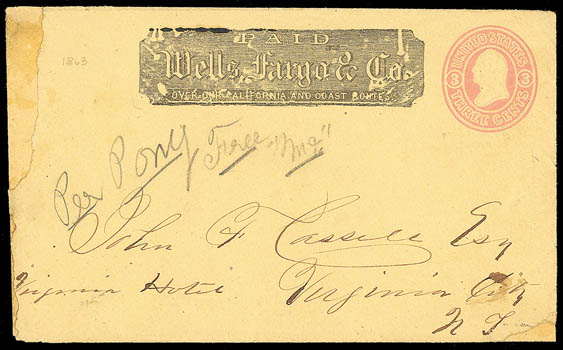