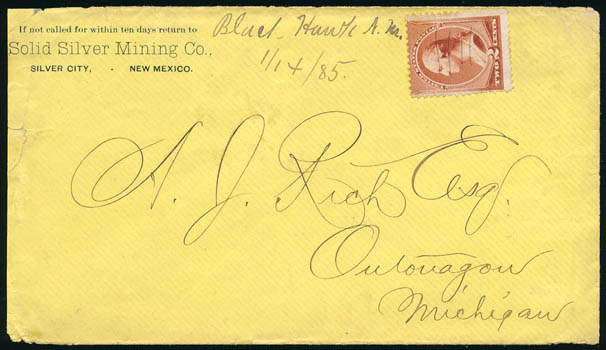 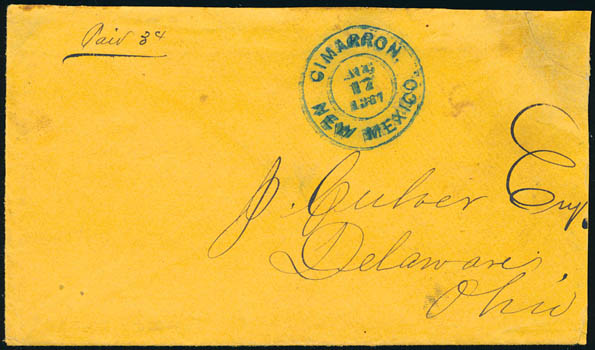 This is an exceedingly scarce use and the stampless listing example by Chase. 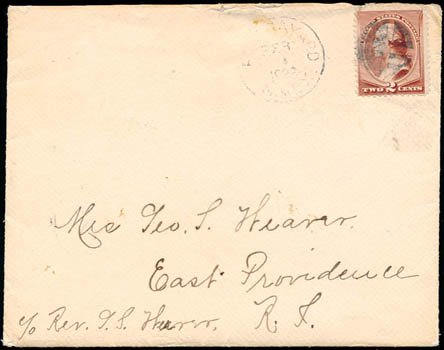 Fort Bayard, N. Mex., Feb 1, 1886, discernible cds on cover to Rhode Island, franked with 1883, 2¢ red brown canceled by quartered cork, with original enclosure with interesting content regarding Apache leader Geronimo…It seems as if this Indian War was almost over. Geronimo has sent his squaw, four children and Nanni in as hostages - wants to meet Gen'l Crook in old Mexico at the next moon to have a talk to settle things…Capt Crawford's death was very sad…the Mexican troops mistook his Navajo scouts for hostiles and fired into them. The Capt. was shot while tring to explain who they where, F.-V.F.
Estimate    $300 - 400.

Geronimo and his band was one of the last major forces of independent Native American warriors who refused to accept the United States occupation of the American West. In the Geronimo Campaign, the Army with Apache Scouts pursued Geronimo and his small band, initially under the command of General George Crook. Geronimo negotiated a "surrender with General Crook but fled the next morning with a small portion of his followers." In 1886 Captain Henry Lawton lead the expedition that brought Geronimo and his followers back to the reservation system for a final time. With Lawton's tenacity for wearing the Apaches down with constant pursuit, Geronimo and his followers had little or no time to rest or stay in one place. Completely worn out, the little band of Apaches returned to the U.S. with Lawton and officially surrendered to General Miles on September 4, 1886 at Skeleton Canyon, Arizona. 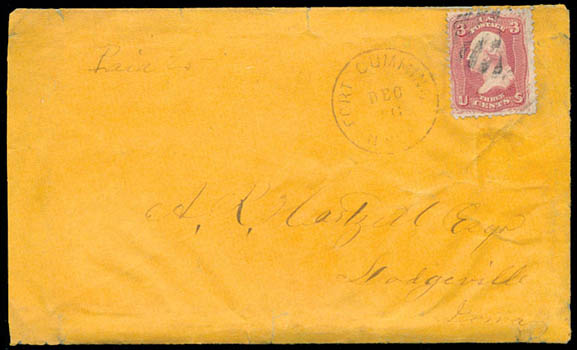 Fort Cummings N. Mex. Dec 26, cds on orange cover bearing 3¢ rose (65), lifted and hinged in place, appears tied by grid cancel to Dodgeville Iowa, manuscript "Paid 25" at upper left, original six page letter datelined "Pinos Altos, N.Mex. Dec. 15" and "Dec. 22 '67" with some interesting content "I very much fear Central City (some 10 miles south of Pinos Altos) will share the same fate that Befel Cave & think that before many months have rolled around Central like Cave City will only be inhabited by cayotes and Jack Apaches", expressing a gloomy view of friends going into the area on mining prospects "I have come to the same conclusion about gold bearing quartz that I came to in regard to Placer Mines in this locality & that is that the longer a man works at it, the poorer he gets. There is but one forlorn hope for this place yet & that is the silver quartz. If that is a success, men here in Pinos Altos will yet hold up their heads. If not, then au revoir to the City of the Pines. There is one smelter just started which promises to be a success. A few month will tell the tale or sound the funeral knell of Pinos Altos-Selah." and he writes of killings over gambling, and his support for hangings of murderers…"The Indians killed two men last Wednesday some 10 miles below Ft. Bayard. Took 4 mules from them… The demon Jack Apache is high muck in this country."; small faults, Fine, ex-Meroni.
Estimate    $300 - 400.

The manuscript "Paid 25" possibly was a fee for stage coach to carry the letter from Pinos Altos that was on the old Butterfield Stage route to the post office at Fort Cummings. The fort was designed and buildt by Gen. G. McClellan in 1862-63, at the mouth of Cook's Canyon, to keep New Mexico from joining the Confederacy and to control depredations of the Apaches led by Cochise, Geronimo, etc. The post office existed there from 1866 to 1887, and this is an exceptionally early letter from there. 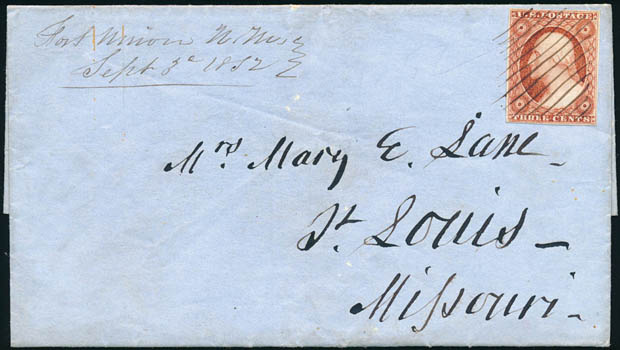 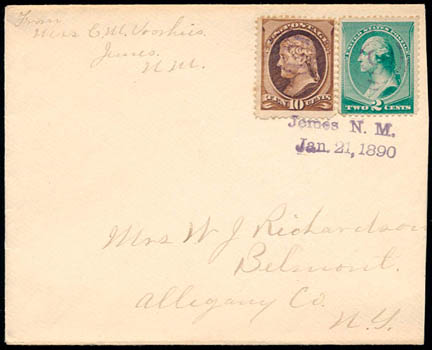 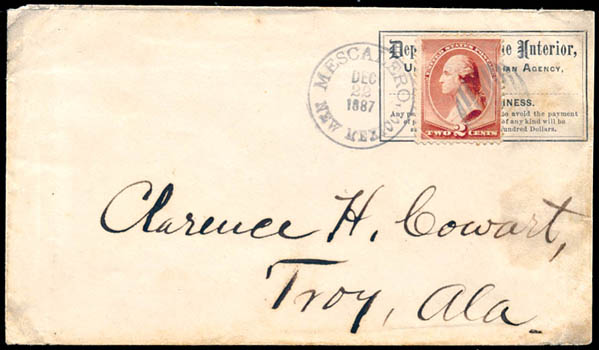 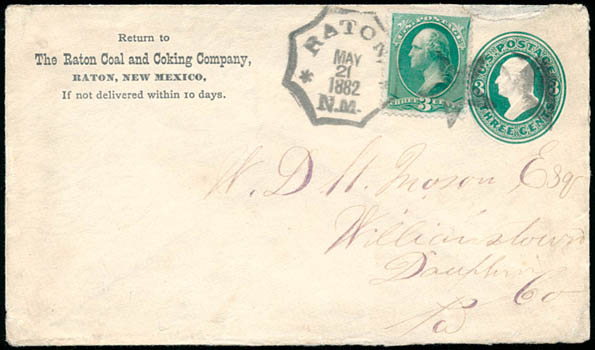 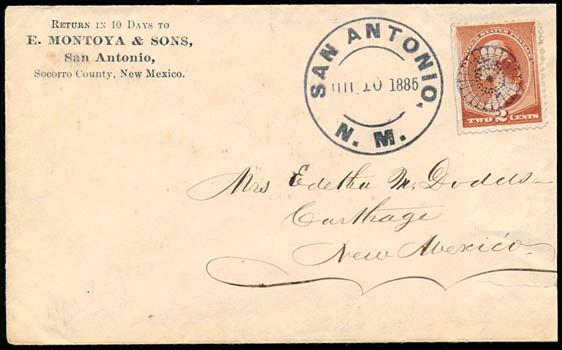 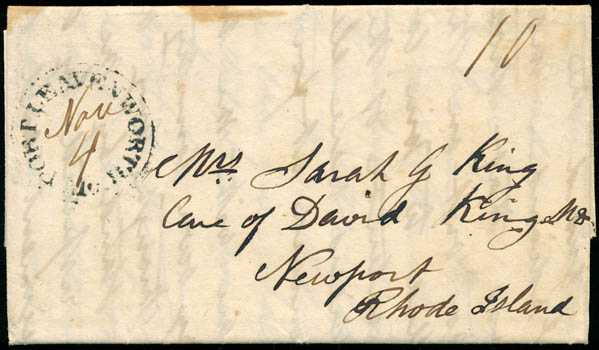 Santa Fe, Oct 6, 1846 (New Mexico Territory), dateline on folded letter written at the end of the Military Occupation Period, carried by courrier and mailed with "Fort Leavenworth, Mo., Nov 4" cds and manuscript "10" rate, letter with interesting content…We have disarmed the Mexicans in every direction, have fortified ourselves and hold the country securely enough…I have rode in forced marches by day and stood for hours at night at the lonely post of the Sentinel subject to the tomahawk or arrow of the Indian or the midnight attack of the Mexican, with description of country & climate, derogatory remarks about Mexicans, their women, etc., Very Fine, a rare early New Mexico territorial item.
Estimate    $500 - 750.