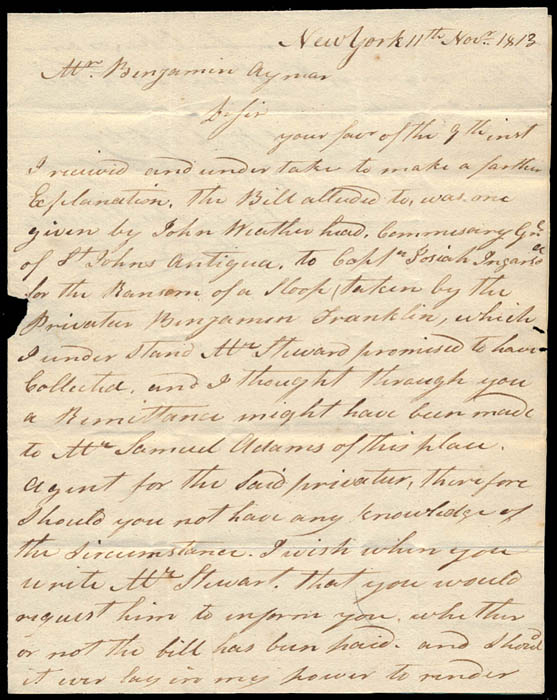 (Naval) War of 1812 Ransom for Sloop Taken by Privateer Benjamin Franklin, folded letter datelined "New York 11th Novr. 1813" and addressed to Benjamin Ayman at New Haven, Ct., no postal markings, letter reads "your favr of the 9th inst. I received and undertake to make a farther explanation. The bill attended to, was one given by John Weatherheadm Commissary Genl. of St. Johns Antigua to Captn. Josiah Ingarsol for the Ransom of a sloop taken by Privateer Benjamin Franklin, which I understand Mr. Steward promised to have Collected and I thought through you a Remittance might have been made to Mr. Samuel Adams of this place, agent for said privateer, therefore should you not have any knowledge of the circumstance…"; file folds, Very Fine and interesting.
Estimate    $300 - 400. 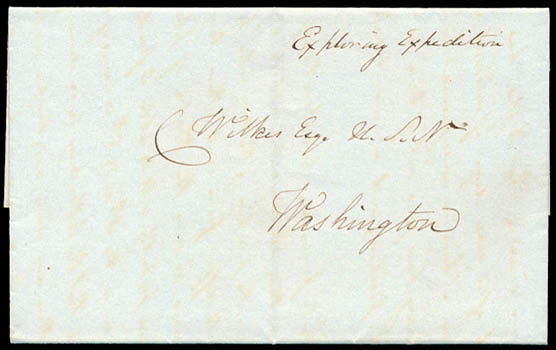 The United States Exploring Expedition of 1838-42, commonly known as the "Wilkes Expedition", included naturalists, botanists, a mineralogist, taxidermists, artists and a philologist, and was carried by the USS Vincennes (780 tons) and USS Peacock (650 tons), the brig USS Porpoise (230 tons), the store-ship USS Relief, and two schooners, USS Sea Gull (110 tons) and USS Flying Fish (96 tons). It was of major importance to the growth of science in the United States, in particular the then-young field of oceanography. During the event, armed conflict between Pacific islanders and the expedition was not uncommon and dozens of natives were killed in action, as well as a few Americans. 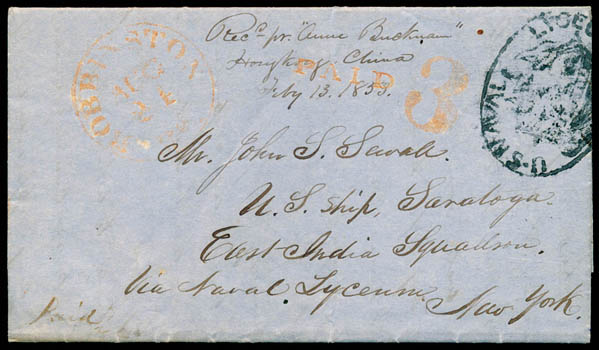 The U.S. Sloop "Saratoga" was a 24-gun sloop of war, comparable to today's light cruiser. She was assigned to the East India Station in 1852, and added to the Japan Expedition of Commodore M.C. Perry in 1853 to make his squadron more impressive.

(Naval) George Henry Cooke Naval Correspondence 1877-1891, group of 41 covers to and from Doctor Cooke while serving on the U.S. Flagship Pensacola, including usages in care of B.F. Stevens in London with their purple oval forwarder handstamps to Montevideo (6) and Chili (4), 1877 use from Turkey with French franking, 1878 from Mahon, Minorca to his wife in Philadelphia, uses from France to him at Egypt and Turkey, 1878 Spain to France (5), 1891 Flagship use from Uruguay, 1887 Flagship use from Peru, 1885 Flagship use from Panama, etc.; each with wax seal stain at center, F.-V.F., an interesting group.
Estimate    $750 - 1,000. 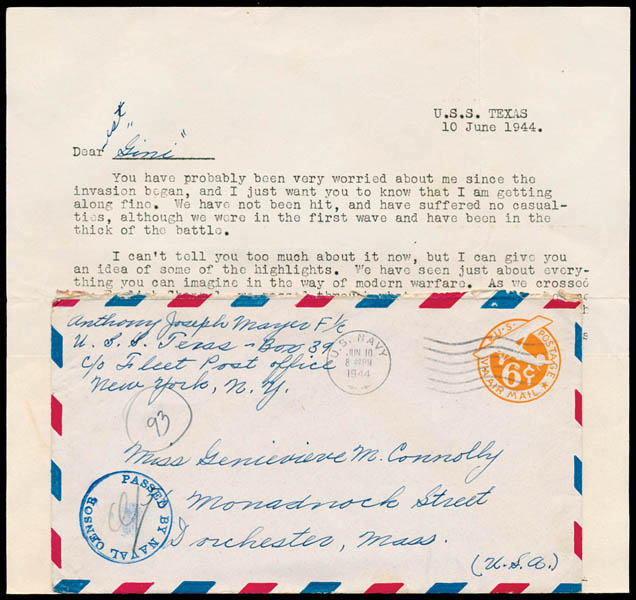 (Naval) U.S.S. Texas Naval Correspondence, 1944-45, of approximately 300 covers most from Anthony Mayer aboard the U.S.S. Texas during WWII, good showing of U.S. Naval postmarks and censor markings including "Free" mail during Nov-Dec of 1944, V-Mail and a few ephemera items, covers mostly without contents (with letter donation forms) but includes a couple enclosures written after D-Day with interesting content including crossing the English Channel, shooting at enemy's vital targets, At one time, we had 27 enemy prisoners on board…They didn't look like supermen to me., being bombed by enemy planes and glider bombs, etc.; an interesting and historical wartime correspondence.
Estimate    $150 - 200.

During WWII, the Texas escorted war convoys across the Atlantic, and later shelled Axis-held beaches for the North African campaign and the Normandy Landings before being transferred to the Pacific Theater late in 1944 to provide naval gunfire support during the Battles of Iwo Jima and Okinawa.