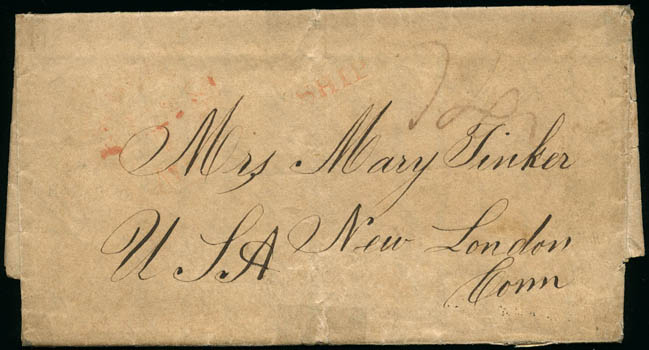 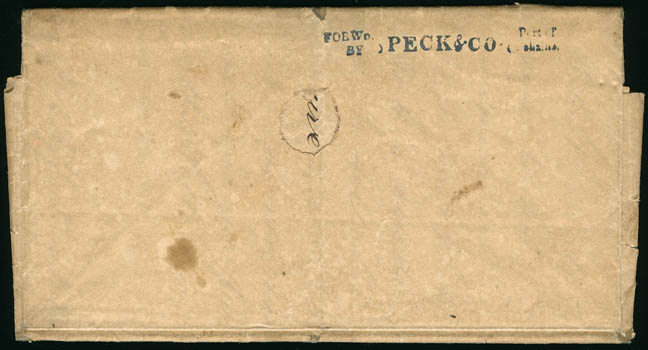 FORWd., BY. PECK & Co., Port of Lahaina, unusual straightline forwarder's handstamp on backflap of folded letter datelined "Mowee one of the Sandwich Isl. / April 3. 1844" to New London, Conn., light strikes of red Mass. cds and "Ship" straightline handstamp with manuscript "14½" due rating for 80-150 miles plus 2¢ ship fee, letter from Edmund Tinker to his mother mentioning going on board the Georgia and lack of shore leave, Very Fine.
Estimate    $5,000 - 7,500.

THE ONLY RECORDED EXAMPLE OF THE PECK & CO. FORWARDERS HANDSTAMP. IT IS FROM A NEW FIND AND HAS NEVER BEEN OFFERED AT PUBLIC AUCTION.

THIS IS THE EARLIEST RECORDED USE OF A HAWAIIAN FORWARDER HANDSTAMP.

Sherman Peck was a planter at Koloa, Kauai in he 1830s, but left for Lahaina around 1841 after drought and disease ruined the silkworm company he had with Charles Titcomb. At Lahaina, Peck was a ship chandler and merchant. He later formed a relationship with C. Brewer & Co. 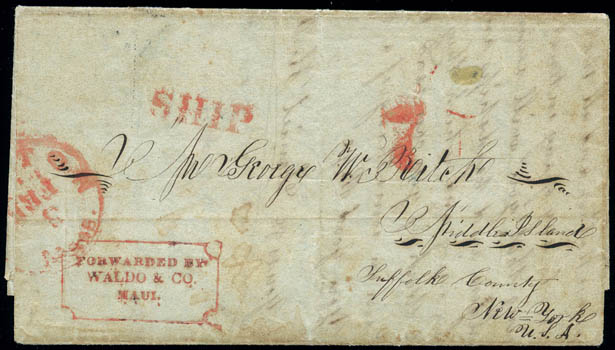 Forwarded by Waldo & Co., Maui., sharp bold strike of red truncated box handstamp on green folded letter Middle Island N.Y., datelined "Port of Lahaina Mowee Sandwich Islands September 5th 1845", entered the U.S. mails with partial red "Boston Mass. Feb 8" cds and matching "Ship" & "7" rating handstamps for 5¢ inland postage plus 2¢ ship fee, interesting contents from a crew member on the whaler Nile to a friend: "…shall go to New Zealand after we go in to Port. the whaling is pretty well broke up on the North West nearly all the ships that we have seen or heard of not got as much oil as we have there is so much fog here that we could not do anything a good deal of the time. we struck 13 whales & saved 6 of them and picked up one dead one we have got 85bls of sperm oil…the Oregon question is settled and that there is war between Mexico and the United States"; slight edge wear and soiling, Very Fine, ex-Advertiser.
Estimate    $5,000 - 7,500.

ONE OF ONLY THREE RECORDED EXAMPLES OF THE WALDO & CO. MAUI FORWARDERS HANDSTAMP, THIS BEING ONE OF TWO STRIKES IN RED.

Giles Waldo arrived at Hawaii in 1845 and was appointed United States Vice-Consul for Lahaina. Waldo established a ship chandlery business but left for the California gold fields in 1849 and died there. This marking indicates Waldo forwarded the letter in his commercial capacity, as distinct from his official capacity.

This letter was carried by the American bark "Angola" from Honolulu Oct. 3rd 1846 to Boston arriving Feb. 3rd 1847 via Pernambuco, Brazil Jan. 3rd. 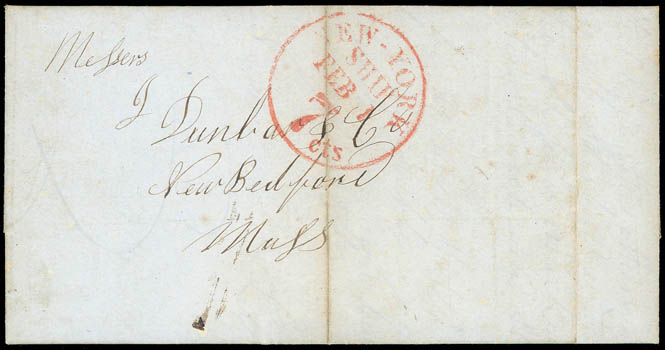 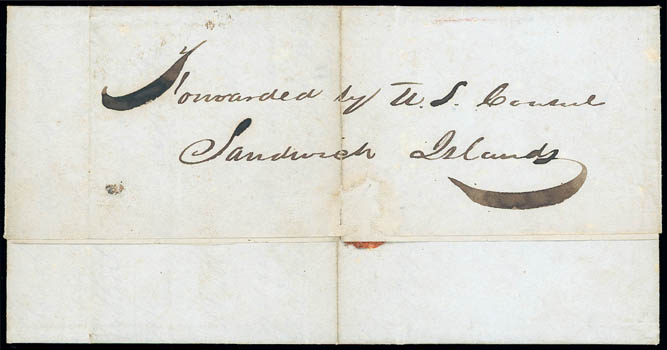 THIS IS THE ONLY RECORDED EXAMPLE OF GILES WALDO'S U.S. CONSUL FORWARDING MARK IN BLACK INK.

Giles Waldo was the United States Vice-Consul at Lahaina in 1846 and used this manuscript mark to indicate he forwarded the letter in his official capacity.

References: Illustrated as listing example in Fred Gregory's Hawaii Foreign Mail to 1870 on p. III-74, no. 29. 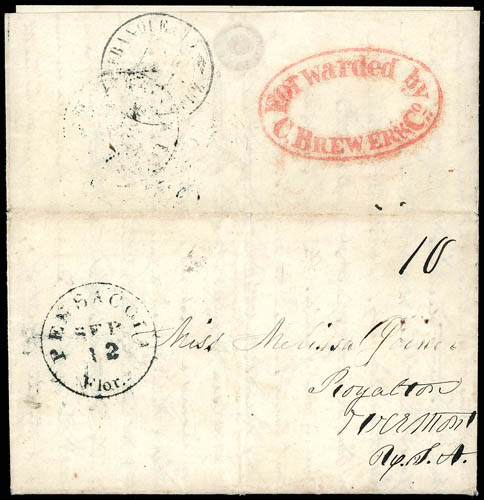 Forwarded by C. Brewer & Co., complete bold strike of red oval handstamp on flap of March 25th 1846 folded letter written by David and Henry Lyman of Hilo, along with their mother to their Aunt and Sister Melissa Joiner at Royalton Vt., slightly indistinct "Franqueado, Vera Cruz" (8.13) transit cds, entered U.S. mails with "Pensacola Flor. Sep 12" cds and manuscript "10" due rating for the 10¢ per ½ oz. rate for over 300 miles; some interesting content including, "My Dear Aunt…. I was at the volcanoe and spent a 'Merry Christmas' in the crater and ate a Christmas dinner in a cleft of the rock…D.B.L." and "April…We have never had so many ships here before now. A week or two ago there was twenty ships and one schooner here at a time. 19 American whalers, French man of war, and 1 Hawaiian sch'r…Henry Lyman", etc., Very Fine and choice, Gregory Via Mexico census no. 59.
Estimate    $7,500 - 10,000.

A REMARKABLE STRIKE OF THE C. BREWER & CO. FORWARDERS HANDSTAMP, ONE OF ONLY THREE RECORDED EXAMPLES.

This cover, along two others (census no. 60 and 61), were carried by the French bark "Jeune France" from Honolulu departing Jun. 4th 1846 to Mazatlan. Forwarded in the Mexican post most likely by Messr. Mott, Talbot & Co. to Vera Cruz where marked Paid Aug. 13th and sent out to the blockading squadron probably by the British consul. Then sent by USS "Princeton" to Pensacola Fla. where entered the mails 10¢ due (no ship fee added because letters were entered by a U.S. naval ship). From Pensacola, the letters went north in the Great Northern Mail. Total transit time was just 109 days, quite good considering the conditions. 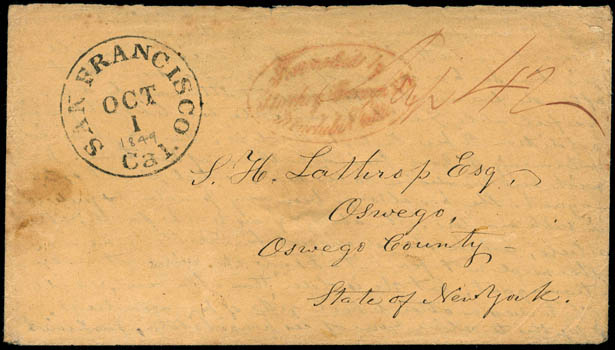 Forwarded by Starkey Janion & Co., Honolulu, Oahu, light buff circa Aug. 1849 cover from American Consul Joel Turrill to Stephen Lathrop, his Brother-in-law who had taken custody of his daughter for her schooling, clear strike of "San Francisco Cal. Oct. 1" cds and red manuscript "Ship 42" rating for 40¢ West coast rate plus 2¢ ship fee, part of letter written on inside of envelope; some edgewear, no flap but partial embossed Consul seal, F.-V.F.
Estimate    $1,000 - 1,500.

ONE OF ONLY 7 RECORDED EXAMPLES OF THE STARKEY JANION & CO. HONOLULU FORWARDERS OVAL. AN EARLY EXAMPLE OF MAIL SENT ON THE PANAMA ROUTE.

Carried on Hawaiian schooner "Caroline" that departed Honolulu Aug. 18th 1849 to San Francisco arriving Sep. 23rd (via Lahaina Aug. 23rd). Then by PMSC "Oregon" from San Francisco Oct. 1st to Panama, and then USMSC "Ohio" from Chagres to New York. This cover was also accompanied by another Aug. 10th 1849 use from the same correspondence to Oswego N.Y. (ex-Honolulu Advertiser, Walske).

Starkey Janion & Co. was formed in 1845 by James Starkey and Robert Janion, both Englishmen by birth. Starkey was in Honolulu before 1843 but returned to England soon after, where he met Janion and they formed Starkey Janion & Co. Janion moved to Honolulu in 1845 to run the business. The Starkey-Janion partnership dissolved in 1851 and Janion formed Janion, Green & Co. Janion returned to England in 1856 and Theo. H. Davies took his place. Davies arrived in 1857. Eventually, Davies took over and formed the giant Theo. H. Davies & Co. 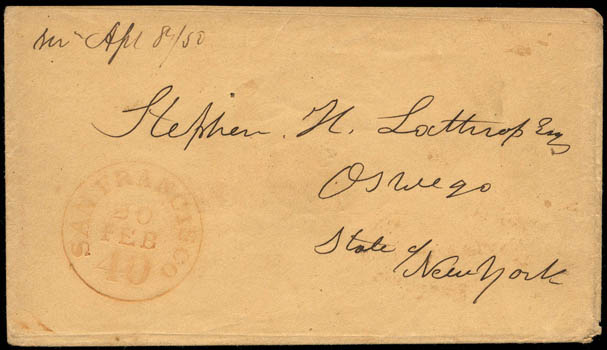 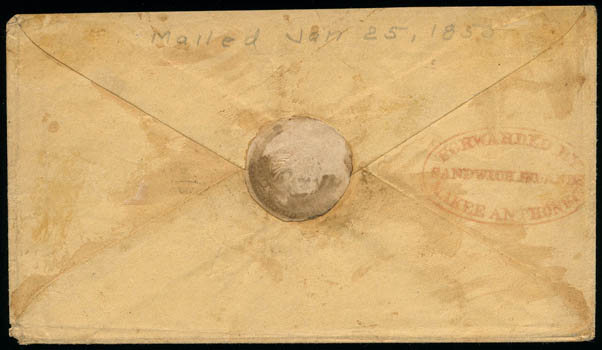 ONE OF ONLY FIVE RECORDED STRIKES OF THE MAKEE ANTHON & CO. FORWARDERS OVAL.

James Makee arrived in Lahaina in 1843 and set up business with Eli Jones under the name Jones & Makee. Jones left in 1847 and Makee formed a partnership. Makee would later purchase the Haliimaile Plantation in East Maui with Charles Brewer II and founded the Ulupalakua Ranch. This cover is from the correspondence of American Consul Joel Turrill to Stephen H. Lathrop, his Oswego attorney who had taken custody of his daughter for her schooling. 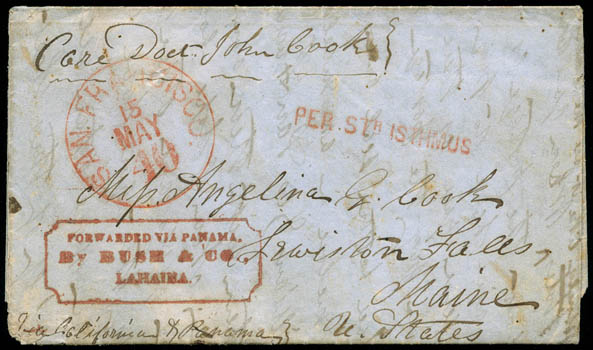 Forwarded via Panama. By Bush & Co., Lahaina., bold strike of chamfered framed handstamp on gray folded letter datelined "Lahaina, Maui, Sand. Isls. March 27, 1850" to Lewiston Falls Me., carried by American Bark Russell that sailed from Honolulu Mar. 29th via Lahaina (Apr. 31) to take on the Bush & Co. mail bag to San Francisco, red "San Francisco '40' 15 May" integral due rating cds with matching red "PER STr. ISTHMUS" straightline, carried as directed by Law's Line Isthmus from San Francisco May 15th to Panama arriving Jun. 16th, then by U.S.M.S.C. Georgia departing Chagres Jun. 2th to New York arriving Jul. 8th, affectionate contents from a "bachelor cousin" writing to his female cousins that sheds some light on mailings: "When you write to me you need not mind about the postage as I can pay the postage here. But you will have to pay the postage on the letter I send to you as there are no arrangements so that I can pay the postage in advance. Perhaps you had better seal and direct the letters to me then enclose in an envelope directed to Messr. S.N. Williams, San Francisco, then they will receive them with their own and forward them to me."; minor edge toning and wear, a Very Fine use, ex-Ostheimer, Advertiser; with 1996 P.F. certificate.
Estimate    $7,500 - 10,000.

ONE OF ONLY TWO RECORDED STRIKES OF THE BUSH & CO. LAHAINA VIA PANAMA FORWARDERS HANDSTAMP.

A RARE HAWAII USE CARRIED ON THE FIRST SAILING OF LAW'S LINE NON-CONTRACT STEAMER "ISTHMUS" FROM SAN FRANCISCO TO PANAMA.

Alfred Bush and Charles Robinson formed the firm Bush & Co. in 1850. It was dissolved in 1851 when Bush died.

Although the Pacific Mail Steamship Company had an exclusive government contract to carry the mails, Law offered the San Francisco postmaster the use of his ships to convey mail. On May 14, 1850 the postmaster agreed only on condition that the sender's had to indicate carriage by Law's steamers. This agreement was a breech on the government contract and was eventually terminated after five months. 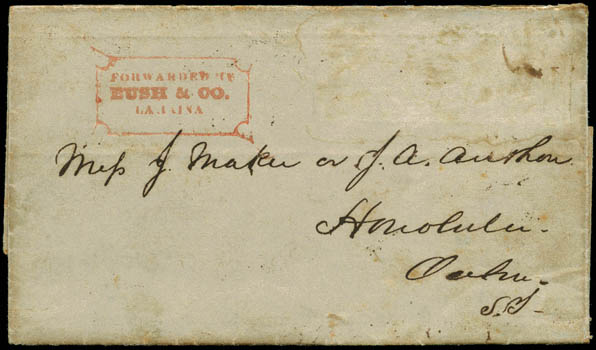 Forwarded by Bush & Co., Lahaina, bold strike of red truncated box handstamp on incoming gray folded letter datelined "San Francisco, Decr. 2. 1850" from Charles Brewer 2nd to Mess. J. Makee or J.A. Anthon at Honolulu, a strip of three 10¢ 1847 stamps was removed from the cover as they had been fraudulently added causing some slight waterstaining of little importance, F.-V.F., an important cover.
Estimate    $2,000 - 3,000.

ONE OF ONLY TWO RECORDED EXAMPLES OF THIS BUSH & CO. LAHAINA FORWARDERS HANDSTAMP.

At the height of the Gold Rush, there was a heavy volume of vessel traffic between Lahaina and San Francisco, and any one of several ships might have brought this letter to Hawaii. A likely choice is the American schooner "Cynosure" departing San Francisco Dec. 2nd to Lahaina arriving Dec. 25th. Bush & Co. forwarded this letter to James Makee or Jules Anthon by giving it to the captain of an interisland schooner. 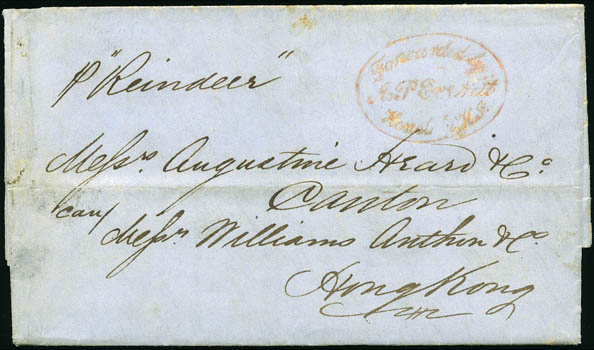 THE ONLY RECORDED EXAMPLE OF THE A.P. EVERETT, HONOLULU H.I. FORWARDERS HANDSTAMP.

This letter was carried as endorsed by American Clipper ship "Reindeer" that sailed from Honolulu on Aug. 18th. She was reported in port at Whampoa on Nov. 2nd. 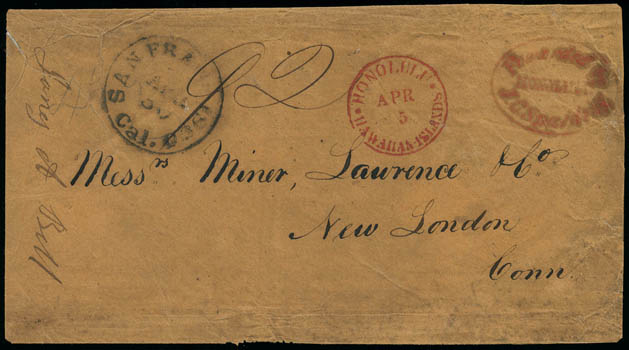 THIS IS THE ONLY RECORDED EXAMPLE OF THE J.C. SPALDING HONOLULU FORWARDERS HANDSTAMP.

J.C. Spaulding was a Honolulu commission merchant and importer.

This cover was carried by American Bark "Zoe" from Honolulu Apr. 7th to San Francisco arriving Apr. 25th. After entering U.S. mails at San Francisco, sent on PMSC "Golden Gate" departing Apr. 30th to Panama City arriving May 12th and then by USMSC "Crescent City" from Chagres May 14th to New York arriving May 24th.