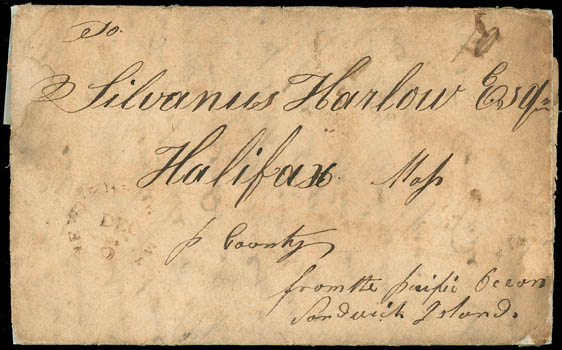 "Wouhoo Sandwich Islands, April 16th 1827", datelined letter from Silvanus Harlow Jr. of whaleship Martha to Silvanus Harlow, Halifax Mass., entered U.S. mails with red "New Bedford Ms. Dec 6" rimless datestamp and manuscript "10" cent due rating, wonderful content including, "…We arrived in this place the 2d of this month where we expect to lay here about 5 weeks longer in order to paint and repair our ship we touched at Mowee another of the Islands, we staid there 8 days, we have obtained 1000 Bbbs of Sperm oil and calculate to get 800 barrels more and start for home, we are a going on the coast of Japan, in the China Seas … there 6 months and touch at Wouhoo again. I expect it will be 12 months from this before we get home…the good Missionaries as one parson Richmond calls them in Mowee, I went to visit one of them and spent one half a day with him and his family. A Mr. Richards, he appeared to be a very sociable man to all but … he appeared me to be a speculator of goods from his own pocket rather than a preacher of the gospel. The natives are indifferent about there Religion that they preach and it does not seem that they had any influence upon the minds of the people in this place…the United States Schooner Dolphin the crew it has been the custom here that as soon as a ship comes at anchor they will be swimming a long side and come on board if they are permitted by the Captain. Women I mean and after the Missionaries come there they advised the Ships to put in force until the USS Dolphin came it was 6 months imprisonment for any women to attempt the … the crew of the come on shore and went to the King for to admit girls on Board of the Ship he told them he could do nothing with it, it was in the hands of Mr. Bingham to admit them … he was a Christian and knew better than he did, they went to Mr. Bingham he told them to go to the King for he had nothing to do with, well he says they we have been to the King, and he says that it was you that advised his council to put in force such a law he promptly denied of having any thing to do with it, they then sent a message to the King to send on board of that Schooner before 6 oclock that night and they must suffer the consequence, however none came and … they went on shore armed about 9 oclock that evening and wrecked the King's house in pieces and chased poor Bingham back in the mountains where he took lodgings for that night and keep himself secreted for some days when he and the other missionaries in a canoe left for Mowee to the great joy of the inhabitants when the tabu law was broken and after the Dolphin had sailed they returned to come back again but have lost all of their influence and dare not impose any such laws…" and signed "Silvanus Harlow jr, Ship Martha, Pacific Ocean"; some fold separations reinforced and some soiling, Fine.
Estimate    $5,000 - 7,500.

A REMARKABLE LETTER PROVIDING AN ACCOUNT OF THE "BATTLE OF HONOLULU - 1826", THE FIRST VISIT BY THE U.S. NAVY TO THE HAWAIIAN ISLANDS.

This letter was probably carried along with a Jul. 20th 1827 letter (Gregory census #53) by American whale ship "Balaena" from Honolulu Jul. 22nd to New Bedford arriving Dec. 3rd via Tahiti and Cape Horn.

The letter provides an account of the first visit to the Hawaiian Islands by the US Navy, which was in 1826 when the warship USS "Dolphin" came into the port of Honolulu. Commanding the ship was Lieutenant John Percival (aka "Mad Jack" Percival.). The men of the Dolphin, like mariners then, had expectations of female companionship while in port. They arrived on January 16, 1826, and were surprised to find the port unusually tranquil and utterly devoid of the welcoming maidens the crew had anticipated. After making inquiries in the village they learned that, under the influence of the missionaries, the chiefs had not only forbidden the women to swim out to the ships, but had restricted the sale of alcohol. The resulting events have come to be known as the Battle of Honolulu in 1826. 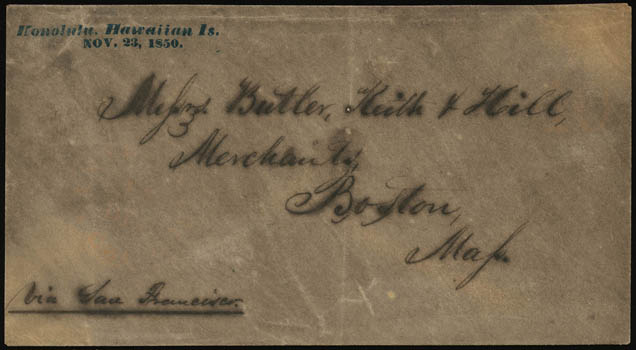 A GREAT RARITY, ONE OF ONLY EIGHT RECORDED EXAMPLES OF THE HONOLULU STRAIGHTLINE CANCEL STRUCK IN BLUE. 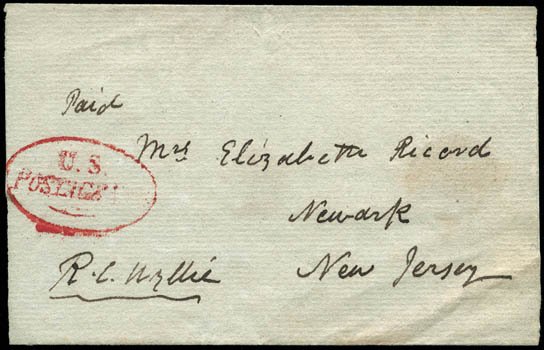 ONE OF ONLY THREE RECORDED EXAMPLES OF THIS HONOLULU "U.S. POSTAGE PAID" OVAL HANDSTAMP ON A STAMPLESS COVER.

Robert Crichton Wyllie (1798-1865) was a Scottish physician and businessman. He also served two decades as Minister of Foreign Affairs in the Kingdom of Hawaii from 1845 to 1865. We note the "U.S. Postage Paid" oval handstamp on only three covers and a strike on a off-cover 13¢ Kamehameha (5) pair (ex-Tows, Advertiser). The "U.S." was removed from the marking in 1859 for use as a canceller on the Numeral issue (MH #762). 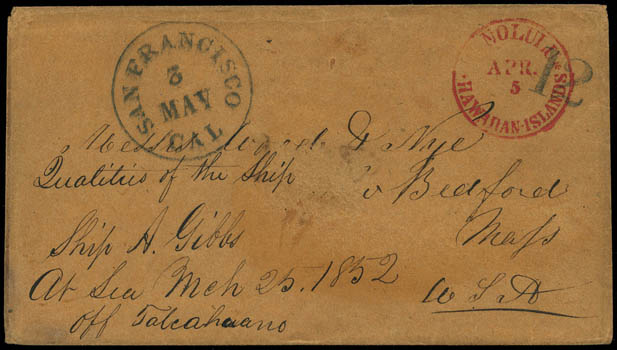 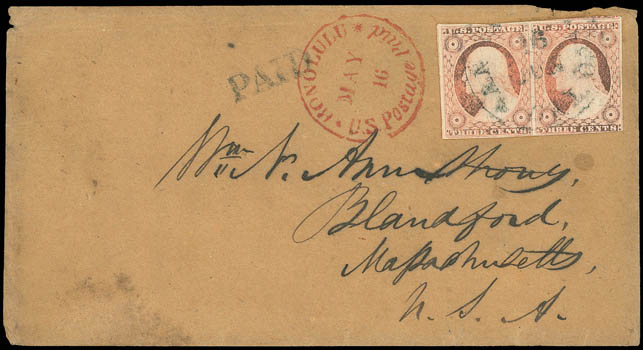 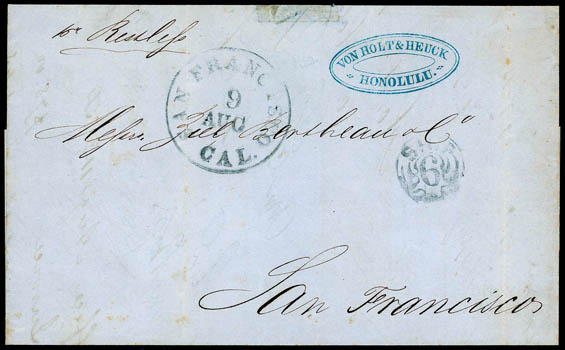 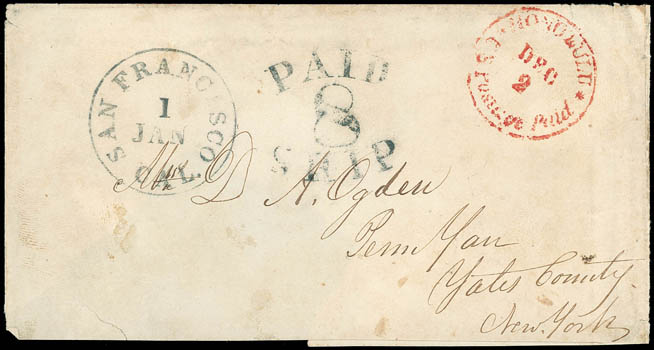 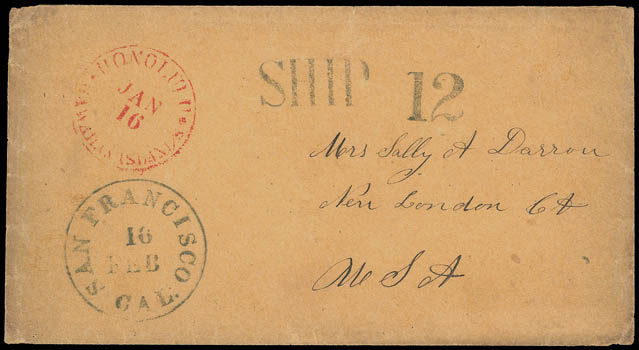 Honolulu * Hawaiian-Island * Jan 16, clear strike of red cds on 1855 orange buff cover to Mrs. Sally A. Darron, New London, Ct., entered U.S. mails with "San Francisco Cal. 16 Feb" cds and matching "Ship" & "12" rating handstamps, original enclosed letter datelined "Oahu Honolulu Jan. 14. 1855" with some interesting content including "The King of these Islands is dead they made a great time at the funeral there were over eight thousand people in the procession, the Masons turned out and Shutz came out with them the streets were all covered with green grass to walk upon, and it looked very nice…", Very Fine.
Gregory No. HON HI28 I    Estimate $300 - 400. 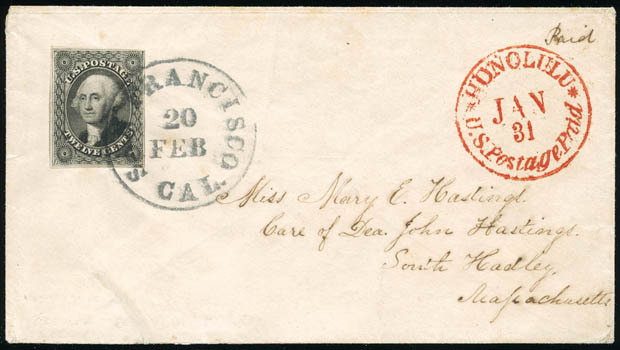 A REMARKABLE USE WITH TREMENDOUS EYE APPEAL. 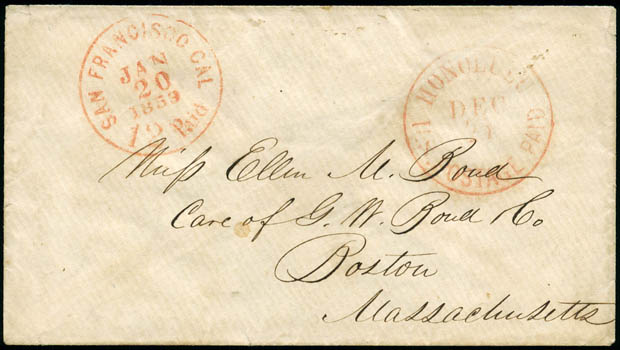