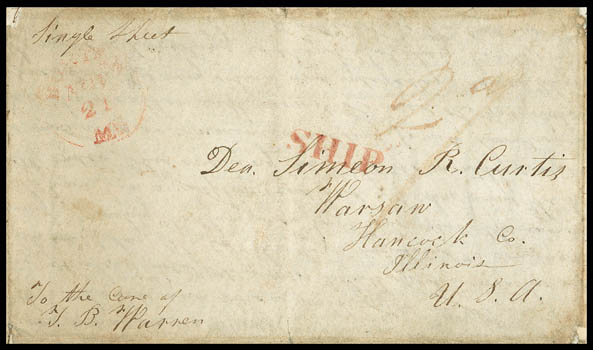 [A round trip letter from Boston to the Sandwich Islands, 1837], and return to Boston. Very lengthy closely written eight page letter written while on board the ship Mary Frazier enroute to the Sandwich Islands by Issac and Emily Bliss between March 9 and April 26, 1837. The ship left Boston December 14, 1836 and arrived off the island of Maui on April 9, 1837 after a remarkable voyage of 117 days. The Mary Frazer sailed for Boston on her return trip April 26, 1837, carrying this letter, which entered the mails with red "Boston, Ms. Aug 21" cds and matching "Ship" handstamp with manuscript "27" cent due rating for 25¢ inland postage plus 2¢ ship fee, then carried overland to Warsaw, Illinois, Fine, A rare early letter.
Estimate    $1,000 - 1,500.

This ship carried the largest, and seventh, reinforcement sent to the Sandwich Islands by the American Board of Commissioners for Foreign Missions, often called just the American Board. The letter is similar to a log. Emily gives the date and Latitude and Longitude of each entry. Issac Bliss was one of four ordained missionaries, in all 32, including a physician, school teachers and wives of all, but two single female teachers. The letter notes that the ship was only three days in rounding Cape Horn, which is remarkable. Most ships took several weeks, and Captain Bligh of H.M.S. Bounty fame had to turn eastward, around Africa's Cape of Good Hope, after losing a month long battle with the wind. The return voyage to Boston was made in just 118 days, as opposed to 163 for the pioneer company in 1820. The letter includes a plan of accommodations on board the barque as drawn and detailed by Issac. A full transcript of this very lengthy letter is included with this lot. 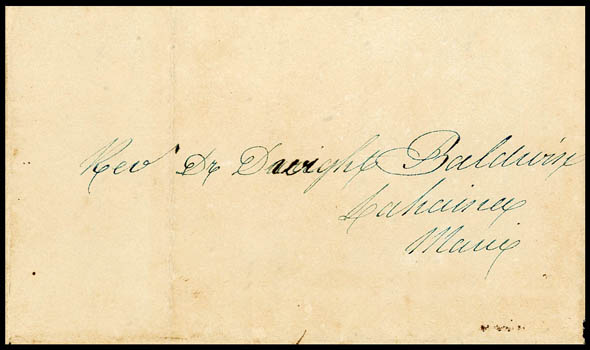 "Ship Narragansett Feb 23d 1845 off the Curtis Islands", datelined on folded letter addressed to Rev. Dr. Dwight Baldwin, Lahaina, Maui, no ship was found back to Hawaii and letter carried back to Nantucket where postscript datelined "Nantucket, Nov 25th 1845" and sent privately to Lahaina, docketed as received Jun. 1846, 3+ page letter reads in part "Not expecting to visit the Sandwich Islands again…It is true men visit your shores who take no delight mixing with good society, whose only happiness consists in sensual gratifications, but the number of that class among whalesmen is not so great as some people suppose… we have been favoured with a small portion of success having added 150 bbls to our voyage since leaving…"; address leaf separated, Very Fine and scarce.
Estimate    $300 - 400.

Curtis Island is an island in the southwest Pacific (located at 30°33'S 178°34'W). It is a volcanic island with an elevation of 427 feet and an area of 99 acres. Together with neighboring Cheeseman Island it belongs to the Kermadec Islands. Politically it is part of New Zealand. The Kermadec Islands lie halfway between North Island, New Zealand and Tonga at approximately the latitude of the Gold Coast, Queensland. Letter was written by a whaling captain Charles W. Coffin to his missionary friend Dr. Dwight Baldwin. 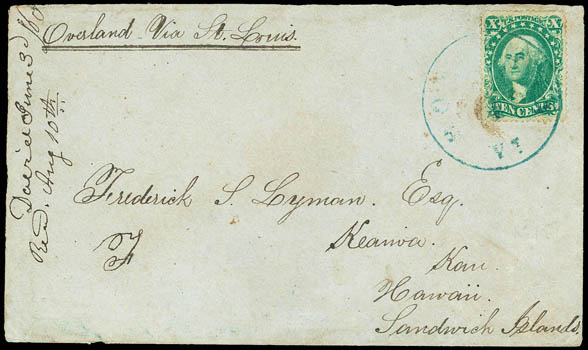 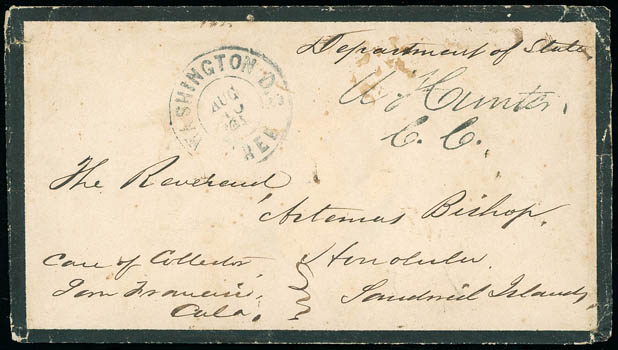 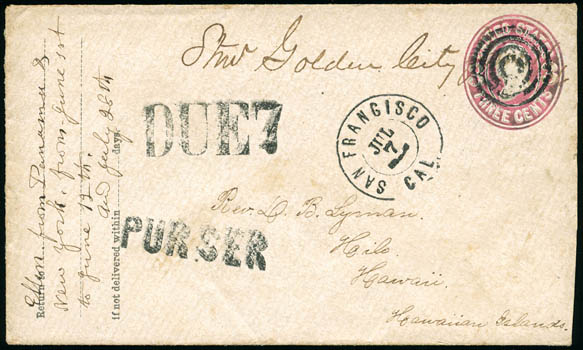 This cover from carried by PMSC "Golden Age" from Panama to San Francisco as a loose steamship letter. The "Purser" marking is known on San Francisco incoming ship letters from 1865 to 1867, which were subject to a 10¢ blanket rate applicable to mail from countries with which the United States had no postal treaty arrangements. From San Francisco the cover was carried by American bark "D.C. Murray" departing Jul. 7th to Honolulu arriving Jul. 20th. 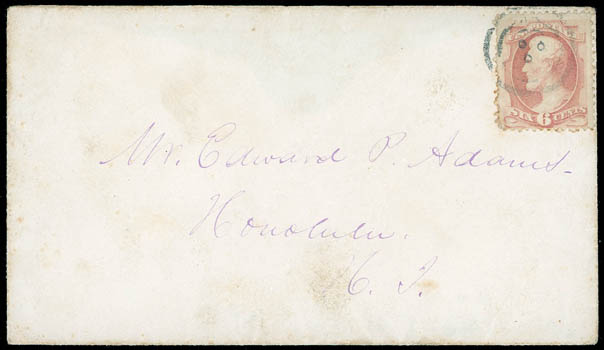 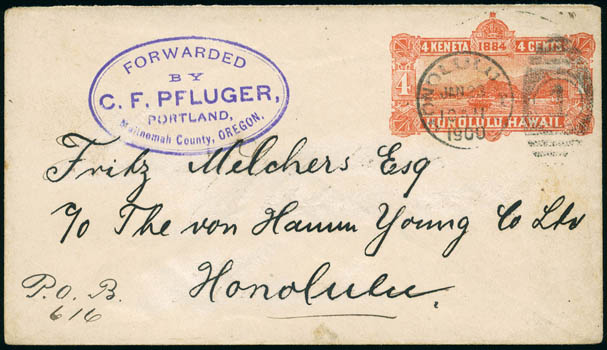 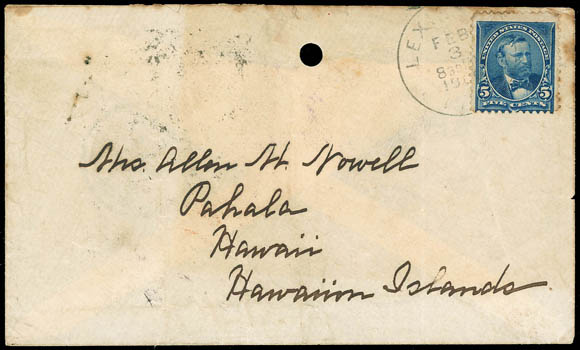 Bubonic plague swept through Honolulu and other parts of the Islands for several months and Honolulu was quarantined starting December 12, 1899 and finally ending April 30, 1900.