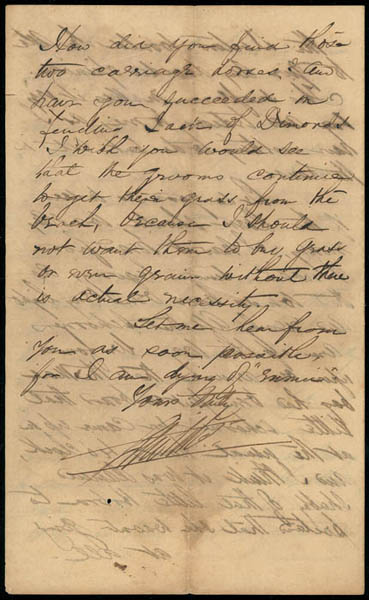 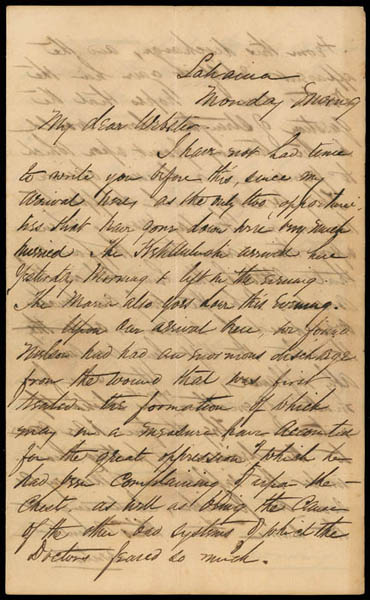 King Kamehameha IV, Autograph Letter Signed "Liholiho" from Sept. 1859 datelined "Lahaina, Monday Evening" reading:
"My dear Webster, I have not had time to write you before this, since my arrival here as the only two opportunities that have gone down here very much hurried. The Kekauluohi arrived here yesterday morning and left in the evening. The Maria also goes down this evening.
Upon our arrival here, we found Nielson had had an enormous discharge from the wound that was first treated. The formation of which may in a measure have accounted for the great oppression of which he had been complaining of upon the chest, as well as being the cause of the other bad systems of which the doctors feared so much. from this discharge, and the apparent relief it gave him the doctors were in hopes that the question of strength alone would be the turning point upon which to pronounce a decisive opinion. They were very much disappointed however on Friday morning when upon their examination they found that although the lung which they considered to be the only one touched was decidedly improved. The other, the left lung, was considerably inflamed, and that some formation of matter upon it was distinctly noticed. They therefore have come to the decision of putting him under the influence of mercury as soon as possible, continuing at the same time the counter-irritants, irritants which they had commenced with on the former side. he has not been told as yet of this new feature in his case, and I was recommended to see him as soon as possible which I did that morning (Friday).
He seemed to be quite comfortable, and though he was somewhat excited, when I first went in, still he seemed glad to see me. Of course I did not say anything, excepting to tell him that I have long wished to see him, and making inquiries about his health etc. I have seen him everyday since, and he seems to be a great deal stronger than when he arrived. I asked the doctors to let me have a decisive opinion this morning as to the state of the left lung. They told me this morning that his pulse was a little higher today than yesterday, in which respect he had been improving for the last three days, but they accounted for this rise in the pulse from being a little found. With reference to the lung - they effusion is not worse. Hutchison could not hear the fluid rattling, although noticed by White and McKibbin. They seemed to be disappointed this morning that no signs are perceptible of his system being under the influence of mercury. They (the physicians) look forward to this with some anxiety, as tending to facilitate the absorption of the effusion of the lung. Things are in this state at the present. yesterday and this morning he has been in very good spirits and cheerful. He saw Mr. Bishop yesterday, who came as a Pastor to see him and he did not seem annoyed it. We were trying to prevent his seeing Whitney's article about our leaving suddenly, but Gilman went and showed him the paper, and has probably proved to his own mind that duplicity has been exercised towards him on the part of the doctors as well as myself. He has not said a word that would show he had any suspicions of his state, though I think that he has given up all hope, for he seems to me to be resigned, and still talks of his eventual gaining in strength. As matters now are I shall likely be kept here for some days, for if the doctors give him up which they do not, I should like to be with him at his end, which may not happen for a week or more. If they express a strong hope of recovery, I shall be down as soon as possible, for I am anxious to come home: but on the other hand it may be fully a week or ten days before the doctors would be able to give any decided opinion. This suspense makes it very bad and tedious to me as I have nothing to do but sit in the house.

Be so good as to see if the Queen should want any money. I haven't heard from Honolulu since leaving, As the winds have been very light and nearly all the Schooners are up this way. We found upon our arrival that the mailbag had been put onboard that little schooner and came up at the usual hour, 4 o'clock, and I think it was damned shabby of that little Hobron to pretend that she wasn't going at all. How did you find those two carriage horses? and have you succeeded in finding jack of diamonds? I wish you could see that the grooms continue to get their grass from the beach, because I should not want them to buy grass or even grain without there is actual necessity. Let me hear from you as soon as possible, for I am dying of "Emma".
Yours truly, Liholiho., Fine.
Estimate    $4,000 - 6,000.

AN IMPORTANT HANDWRITTEN LETTER FROM KING KAMEHAMEHA IV CONCERNING THE NEILSON SCANDAL DISCUSSING HIS FRIEND NIELSON'S HEALTH AFTER HE WRONGLY SHOT HIM IN THE CHEST.

Henry Augustus Neilson was a New Yorker, whose father was the physician to millionaire John Jacob Astor. He longed to travel, coming to Honolulu in March of 1851, when he was 27, as an agent for the New York Board of Underwriters. He became a friend of Liholiho, and they often went riding and hunting together. After Kamehameha IV's coronation, Neilson became major in the King's Guard and eventually the King's personal Secretary, at a salary of $2,000 a year. On Jan. 4, 1855, he became a citizen of the Kingdom of Hawaii.

A royal tour set off from Honolulu in August, 1859, starting on the Big Island, where they saw the volcano. Next, Liholiho and his entourage chartered the interisland schooner "Maria" to take them to the palace grounds at Lahaina. In his group were Queen Emma, and their infant son, Prince Albert. Also included were Neilson, royal physician Dr. Robert McKibbin (who had just been appointed to the Board of Health), Charles Gordon Hopkins, the director of the government press, and "about 30 natives belonging to the King's party." On Saturday, Sept. 10, Liholiho ordered the "Maria" out for a cruise with his boat's crew, and proceeded to drink. He grew despondent. Aboard the Maria, he loaded his pistol, which was described as a "rifle pistol" or "short rifle." The reports said that he "drank freely" and "more than usual."

Why was he morose? He had heard gossip in Honolulu - contrary to all evidence - that that Neilson had engaged in improper relations with Queen Emma. Sometime that night, or early the next morning, the King ordered his boat lowered, and returned to shore. He gave his pistol to a servant and proceeded to the governor's house near the beach at Lahaina, where he continued drinking all day. At about 11 p.m. Sunday night he told his servant to fetch his pistol. The servant refused, and the king beat him and ordered him to prison. Another servant retrieved the pistol. The King took it and went to Neilson's house, where he found his secretary sitting on his lanai, wearing white cotton trousers and jacket, preparing for bed. McKibbin and Hopkins were inside. He said to Neilson, "You must die." When the major heard his death sentence, he turned and fled into the house. The King pursued him and he fired a shot. The pistol ball entered Neilson's chest, traveled upwards, exiting near his shoulder, indicating that Neilson had been leaning back, trying to avoid the shot. He was able to escape and stagger to a neighboring house outside the royal grounds, where he lay bleeding. The gunshot aroused the household. Dr. McKibbin asked permission to go and treat Neilson, but the king refused. He threatened to shoot the doctor if he moved. Emma intervened, pleading with her husband. It infuriated the king to see her pleading for - in his addled mind - her lover. Witnesses said he then beat Emma and threatened to shoot both her and little Albert.

A local doctor, M.B. White, was called to attend to Neilson's wounds. In a letter to his brother Bleeker, Neilson clarified that he had been shot "on the lower part of my chest, just where the short ribs join the breast bone…then it passed toward the right side, struck a rib about midway which it followed, and just managed to drop out a few inches below my right armpit…" Eventually, persuaded of the innocence of both Emma and Neilson, the king allowed McKibbin to treat Neilson with mercury and morphine, though he frequently coughed blood.

The "Maria" carried the news to Honolulu a week later; on the return voyage she brought Lili'uokalani, Princess Victoria, Governor Kekuanaoa, David Kalakaua and Charles Bishop to offer advice and condolences. There was never an official investigation into the shooting of Henry Neilson. On Oct. 12, the King wrote a letter to Neilson in which he "regretted" this "great false act of my life … the act committed by me was premeditated, founded upon suspicions long harrowed up and extending for a length of time." Liholiho announced that he would make a public proclamation, submit to a trial and abdicate the throne. A flurry of letters were exchanged between the king and his minister of foreign affairs, Robert Wylie. Liholiho listed his reasons for abdication, but Wylie begged him not to exaggerate the gravity of the affair and opposed the proclamation.

When the scandal began to die down, the royal party returned to Honolulu. Neilson was never out of danger. His health ebbed and flowed. Eventually he was considered safe to move and was taken back to Honolulu, where he was carried ashore on a palanquin, and taken to his cottage on Alakea Street. He never recovered, living as an invalid for more than two years. He died at his home on Feb. 12, 1862 at the age of 38. 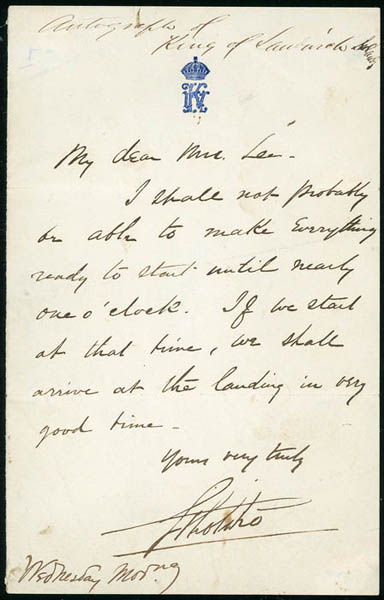 King Kamehameha IV, Autographed Letter Signed "Liholiho" on 7-1/8" x 4½" stationery (Medcalf #21) with blue embossed Royal "K IV" monogram emblem, reading in English "My dear Mr. Lee, I shall not probably be able to make everything ready to start until nearly one o'clock. If we start at that time, we shall arrived at the landing in very good time. Yours very truly, Liholiho"; contemporary "Autograph of King of Sandwich Islands" at top, Very Fine.
Estimate    $1,000 - 1,500. 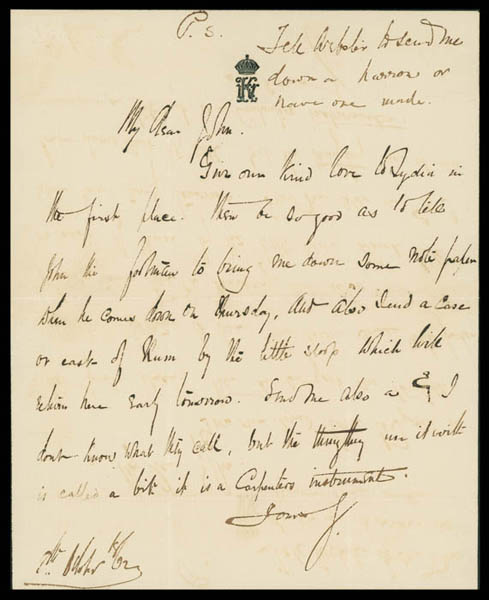 King Kamehameha IV, Autograph Letter Signed "L" on 8¾" x 7¼" Royal stationery (Medcalf #20) black bordered with "K IV" crown imprint, reading "My Dear John, Give our kind love to Lydia in the first place. Then be so good as to tell John the postmaster to bring me down some note paper when he comes down on Thursday, and also send a case or cask of Rum by the little sloop which will arrive here early tomorrow. Send me also a [Drawing of Hand Drill] I don't know what they call, but the thing they use it with is called a bit it is a Carpenters instrument. Yours J. October 8/62." and postscript "P.S. Tell Webster to send me down a harrow or have one made."; light file folds, Very Fine.
Estimate    $1,000 - 1,500. 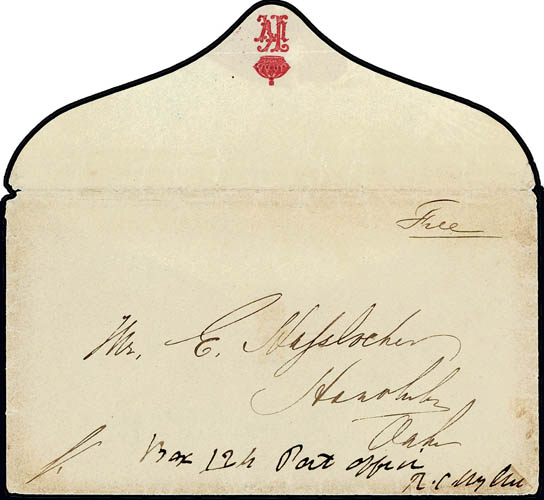 Robert Crichton Wyllie (1798-1865) was a Scottish physician and businessman who served two decades as Minister of Foreign Affairs in the Kingdom of Hawaii. 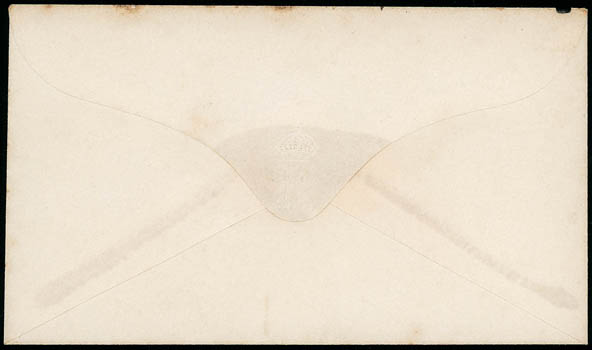 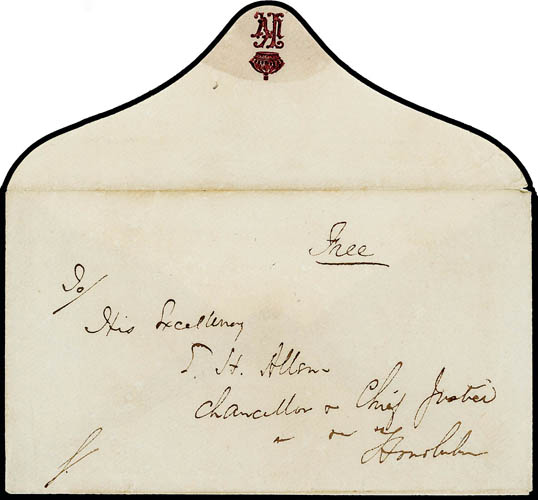 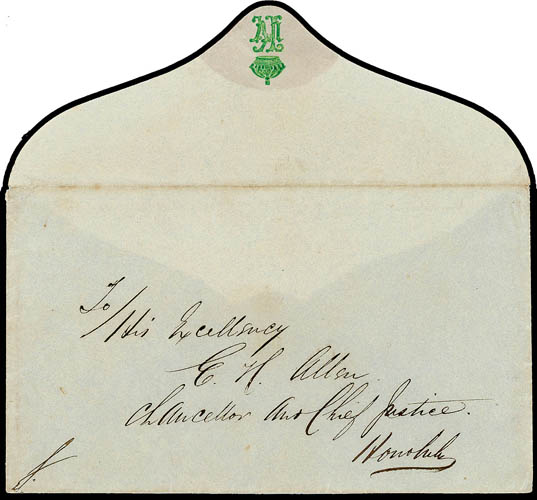 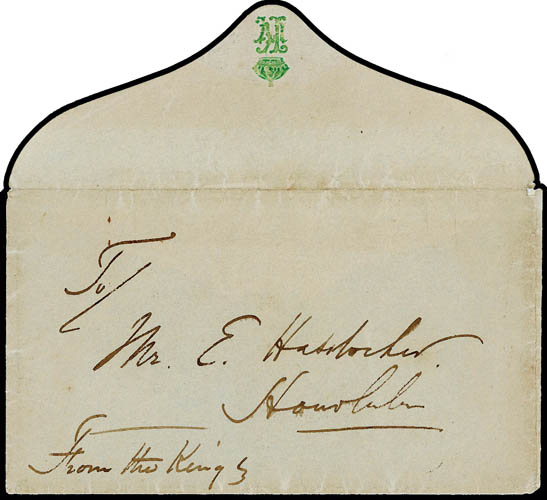 Major Hasslocher was involved with the first professional operatic performance in the Islands which took place April 4, 1862 at the Royal Hawaiian Theater. 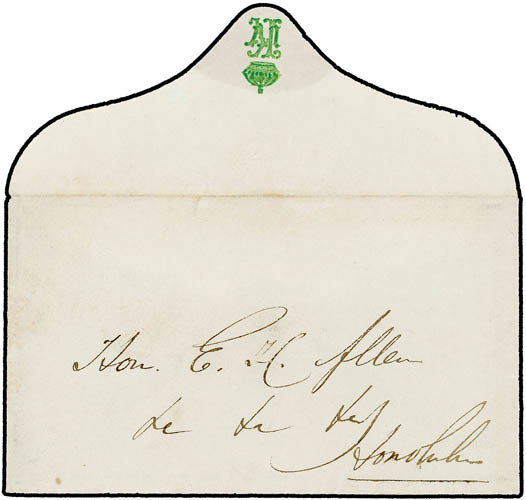 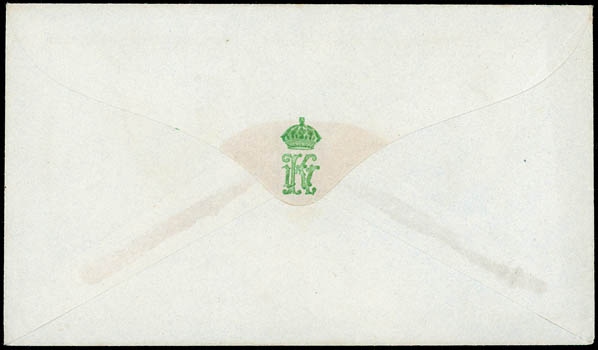 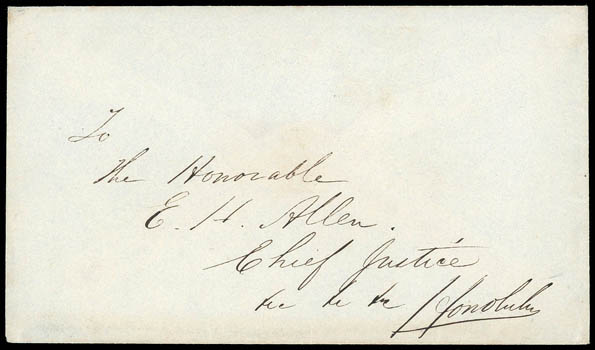