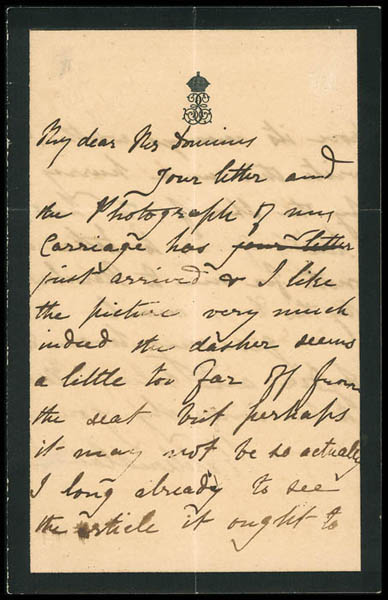 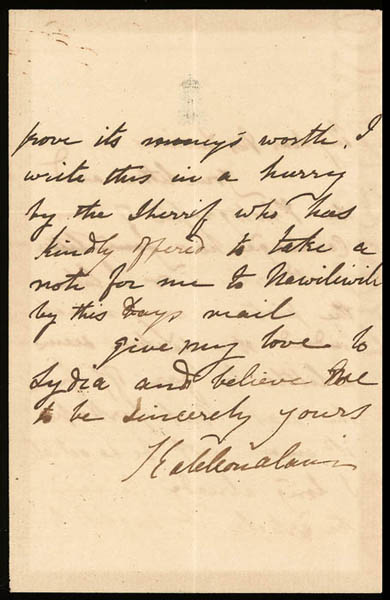 Queen Emma, Autograph Letter signed on 6-1/16" x 3-7/8" Royal stationery (Medcalf #31), letter reads: "My Dear Mr. Dominis, Your letter and the Photograph of my Carriage has just arrived & I like the picture very much indeed, the dasher seems a little too far off from the seat but perhaps it may not be so actually. I long already to see the article it ought to prove its worth. I write this in a hurry by the Sheriff who has kindly offered to take a note for me to Nawiliwili by this days mail. Give my love to Lydia and believe me to be sincerely yours" and signed "Kaleonalani"; light file folds, Very Fine, Medcalf $2,500.
Estimate    $1,000 - 1,500.

This letter was sent from Queen Emma (Kaleonalani) to John Owen Dominis (1832-1891) who was married to Princess Liliuokalani, whom he had met during school days. His marriage to Liliuokalani and his friendship with King Kamehameha V brought him many honors and positions. In 1891, he became Prince Consort of the Kingdom of Hawaii after Liliuokalani became Queen when her brother King Kalakaua died on January 20, 1891. She was the last reigning monarch. 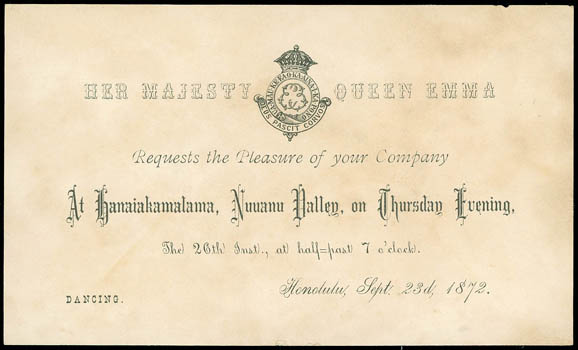 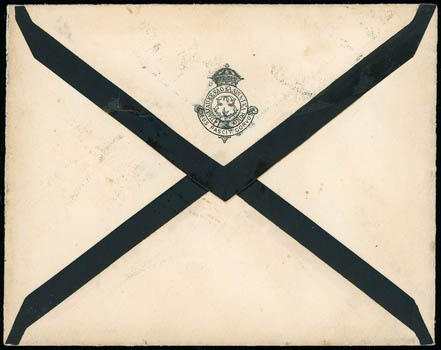 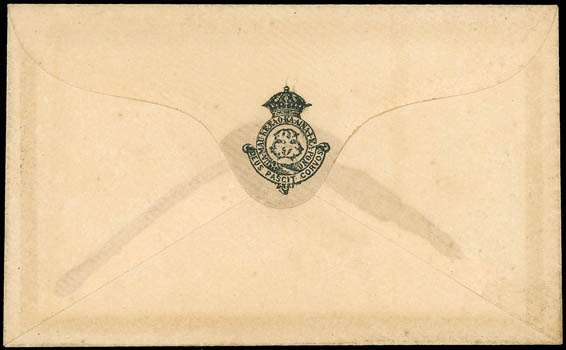 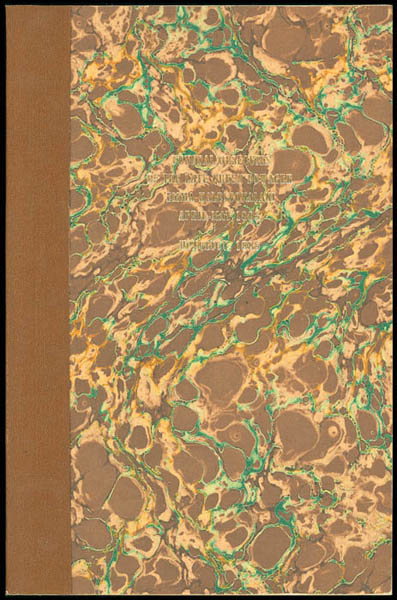 First edition. Compiled from articles originally published in the Hawaiian Gazette of April 29th, May 6th, 13th and 20th. The editor of that paper, Alatau T. Atkinson, states (p 2): "In response to many requests, the following articles and notices are reprinted from the Gazette. Queen Emma died on Saturday, April 25th, and was buried on Sunday, May 17th. The funeral was to have taken place on May 10th, but had to be postponed in consequence of a very heavy rainstorm. In the following pages will be found a succinct account of the Queen's life and of the events which followed her death. Very great care was taken that all the information should be correct and substantial by those were acquainted with facts, as well as by careful search of printed and written documents." Also of note is an advertisement inside the front wrap for J.J. Williams's Hawaiian Photograph Studio. Along with "photographs of the volcano and other points of interest on the various Islands," Mr. Williams was also offering "exact duplications of the great funeral pageant in honor of Queen Dowager Emma," with further details of the images listed. Forbes 3689. 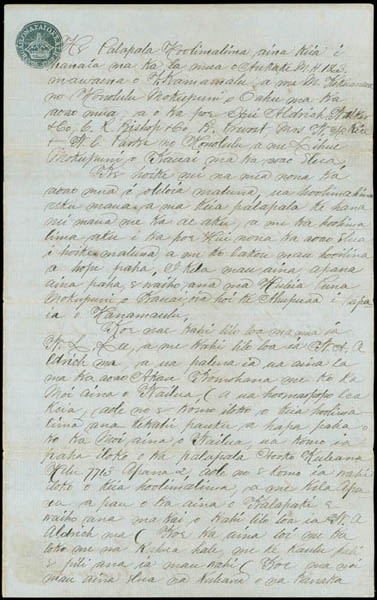 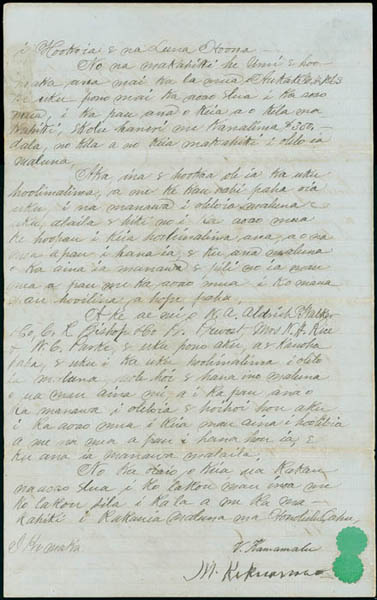 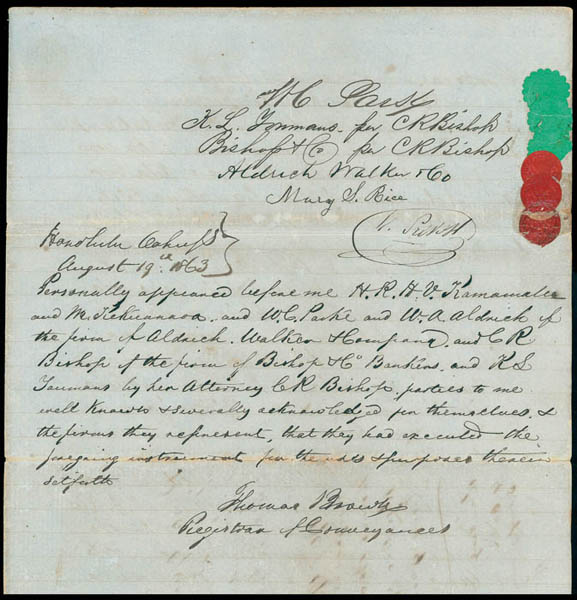 A RARE LAND DOCUMENT SIGNED BY BOTH PRINCESS KAMAMALU AND HER FATHER KEKUANAOA.

Victoria Kamamalu Kaahumanu IV (1838-1866), was Kuhina Nui of Hawaii as Ka'ahumanu IV, and its crown princess. She was daughter of Kinau and Kekuanoa, and sister of both Kamehameha IV and Kamehameha V. Princess Victoria was appointed as Heiress-Apparent and crown princess by her brother king Kamehameha V in 1863. She would have become queen of Hawaii upon her brother's death, but she predeceased him.

Mataio Kekuanao'a (1791-1868) descended from the high chiefs of the island of Oahu. His first name is the Hawaiian form of Matthew. Kekuanao'a translates as "the standing protection" in Hawaiian. He was the Royal Governor of Oahu 1839-64. On December 21, 1863 he was made the sixth Kuhina Nui, replacing his daughter who became Crown Princess and heir apparent to the throne. He also served as a member of the House of Nobles from 1841-68, Privy Council 1845-69, and as President of the Board of Education from 1860. In 1866, Mark Twain wrote of Mataio Kekuanao'a: "[A] man of noble presence." and "[S]eemingly natural and fitted to the place as if he had been born to it…".