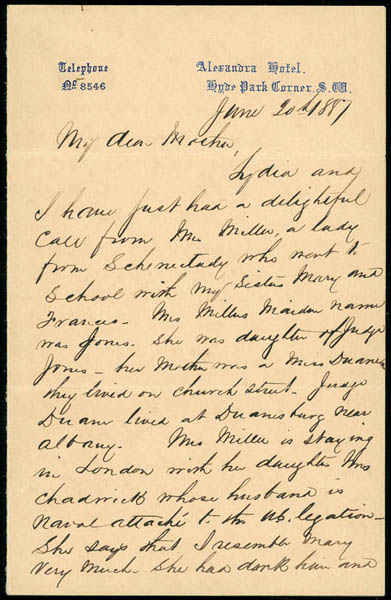 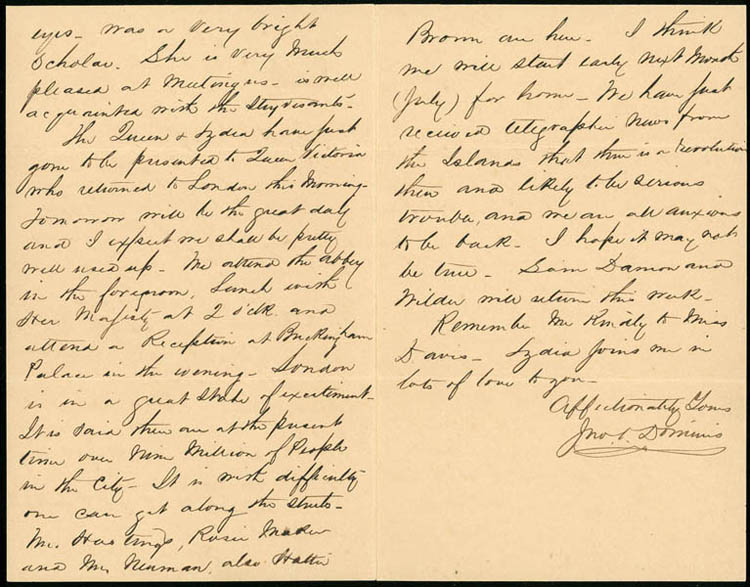 Prince Consort John Owen Dominis, Autograph Letter Signed, 3 pages, June 20, 1887, London, England on Alexandria Hotel stationer to his mother reading in part, "…The Queen & Lydia have just gone to be presented to Queen Victoria who returned to London this morning. Tomorrow will be the great day and I expect we shall be pretty well used up. Will attend the abbey in the foreground, Lunch with Her Majesty at 2 O'clk and attend a Reception at Buckingham Palace in the evening…London is in a great state of excitement…I think we will start early next month (July) for home. We have just received telegraphic news from the Islands that there is a revolution and likely to be serious trouble, and we are all anxious to be back. I hope it may not be true. Sam Damon and Wilder will return this week…Lydia joins me in lots of love to you, Affectionately Yours, Jne. O. Dominis", Very Fine.
Estimate    $1,000 - 1,500.

A WONDERFUL HISTORICALLY SIGNIFICANT LETTER FROM THE PRINCE CONSORT DURING THE 1887 ROYAL HAWAIIAN VISIT TO LONDON.

John Owen Dominis (1832-1891) was American-born but moved to Hawaii in 1837 with his whaling captain father and mother. In 1862, he married Princess Liliuokalani whom he had met during school days. His marriage to Liliuokalani and his friendship with King Kamehameha V brought him many honors and positions. In 1891, he became Prince Consort of the Kingdom of Hawaii after Liliuokalani became Queen when her brother King Kalakaua died on January 20, 1891 She was the last reigning monarch.

The A Meeting of "Sister Sovereigns": Hawaiian Royalty at Victoria's Golden Jubilee mentions the 1887 visit described by Dominis in his letter, "In June of 1887, distinguished guests from all over the world poured into London for Queen Victoria's Golden Jubilee…few visitors attracted more attention than the Hawaiian royal delegation, which included Queen Kapiolani, consort to King Kalakaua, and her sister-in-law Princess Liliuokalani, heir to the throne and future last Monarch of Hawaii. When the Hawaiian delegation landed in Liverpool on June 1st, thousands of bystanders were gathered on the wharves - eager as Liliuokalani later wrote to catch a glimpse of "the Queen of the far off Sandwich Islands". Today I want to read the Hawaiian royal visit as a touchstone in the cultural relations between Britain and Hawaii."

The Hawaiian Rebellion of 1887, was a group of cabinet officials and advisors to King Kalakaua and an armed militia that forced the king to promulgate what is known by its critics as the "Bayonet Constitution". The impetus behind the imposition of the 1887 constitution was the frustration amongst members of the Reform Party (also known as the Missionary Party) with the growing debt of the Kingdom, the spending habits of the King, and general governance of the Kingdom. It was specifically triggered by an ill-fated attempt by Kalakaua to create a Polynesian Federation under his rule, and a bribery scandal Kalakaua was involved in regarding opium licenses. The 1887 constitution stripped the monarchy of much of its authority, imposed significant income and property requirements for voting, and completely disenfranchised all Asians from voting. 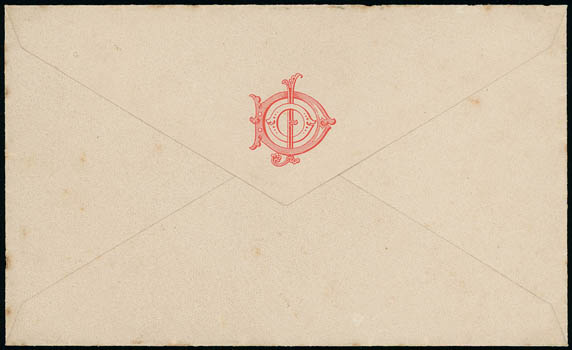