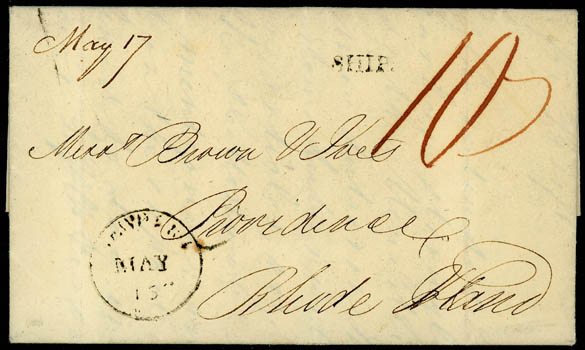 (War of 1812) 1813 (Mar. 31) Liverpool, England to Providence, R.I., folded letter carried transatlantic by private ship, entered mails with "Newport, May 15" cds and matching small "SHIP" handstamp with large red manuscript "10" rating, interesting War of 1812 related content including "…During last week the demand for Cotton continued very dull, till late on Saturday evening, when information was received from London by Express that our Government had come to the determination of imposing an additional duty on American Cotton of 6d p lb in neutral ships & 1½d p lb in British ships…a report that an Order in Council will be immediately issued to blockade all the ports of the U.S. except Boston & those of Rhode Island…" and continued "2nd April…The last Gazette contains the order for the blockade of New York, Charleston, Port Royal, Savannah & of the River Mississippi, but the intended duty on Cotton has not yet been brought before Parliament…" and continued "3rd April…The intended Tare on American Cotton has been strongly opposed…the Minister has given it up…The new duties on Imports are 25 pct on the Custom duties with the exception of certain articles, viz, Tea, Sugar, raw Silk & Cotton wool…", Very Fine and interesting.
Estimate    $750 - 1,000.

MERCHANT LETTER ANNOUNCING THAT PARLIAMENT HAD ORDERED THE BRITISH BLOCKADE OF THE AMERICAN PORTS OF NEW YORK, CHARLESTON, PORT ROYAL, SAVANNAH & OF THE RIVER MISSISSIPPI, BUT THE INTENDED TARIFFS ON AMERICAN COTTON WERE DENIED.

The blockade was ordered on November 27, 1812 and it took time to become known to newspapers and merchants. The actual blockade of a given port had to be made formally by a warship on station, so the actual port closures were staggered in time during the war. Mail could bypass the blockade by entering or leaving through an unblockaded port such as Newport R.I. in this instance.

A NEWLY DISCOVERED MILITARY EXPRESS HANDSTAMP THAT IS BEING OFFERED AT AUCTION FOR THE FIRST TIME. THIS IS THE ONLY RECORDED EXAMPLE.

There is another Las Cruces N.M. use dated Apr. 30th 1864 (Dike Collection, Frajola sale 18, lot 443) with a descriptive letter headed "Fort Whipple, Arizona" that mentions "We have no mail facilities and … have to send out an express". 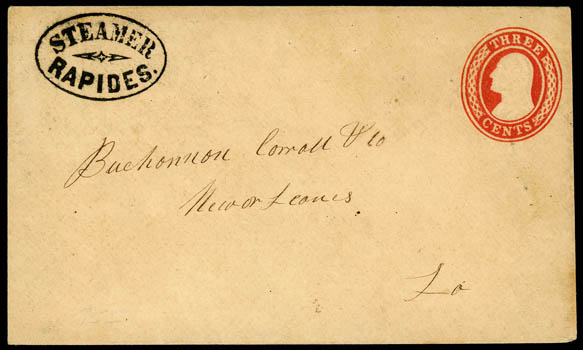 Steamer Rapides, perfect strike of oval handstamp in black on 3¢ red (U9) Nesbitt entire from the Carroll Hoy correspondence to New Orleans La., an Extremely Fine gem.
Milgram No. 1155    Estimate $500 - 750.