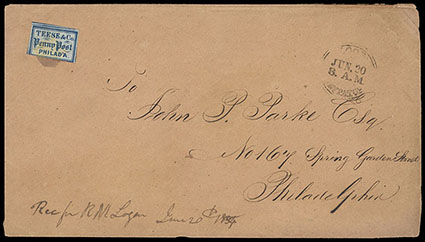 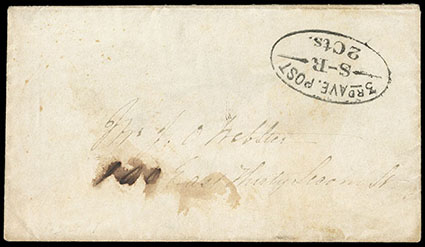 THE ONLY RECORDED HANDSTAMPED THIRD AVENUE POST COVER RECORDED - THIS DEVICE WAS USED TO CREATE THE OVAL ADHESIVE STAMPS.

According to Patton, the origin of the Third Avenue Post Office was first reported in 1872 by W. Dudley Atlee in Vol. X of the Stamp Collectors Magazine on page 164: "According to Mrs. S. Allan Taylor, this post was established in 1855 or 1856, by one S. Rothenheim, carrier for Boyd's post. The stamps he made himself, with a handstamp of either brass or metal. He afterwards gummed and trimmed them carefully, and put them up in pill boxes for sale, on the principle that they got lost and destroyed better that way, and more were the sooner asked for. Street letter boxes being generally kept at groceries, the usual place for the stamps was the till or cash drawer, where they got greatly tossed about, and being separate, small and gummed, they were easily destroyed…" Dated covers corroborate the existence of the post in 1855 and 1856.