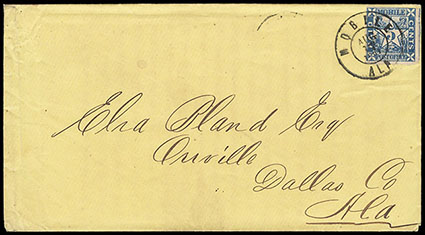 Confederacy, Mobile, Ala., 1861, 5¢ blue, four clear to huge margins including part of adjacent stamp at right, tied by bold "Mobile Ala., Aug17, 1861" double-circle datestamp on yellow cover to Orrville Ala., original letter datelined "Mobile Augst 17th/61" with some good content "…The war may be over in two or three months, and then everything will be much cheaper. I think the Yankees have nearly given up the idea of suffocating us, and are only fighting now to redeem their lost reputation. They will soon get tired of this, for we are bound to whip them whenever they fight, our men are all heroes, and theirs are only hired soldiers working for pay. The south will be the most prosperous nation on earth, after she achieves her Independence, and that is near at hand. The planters hare everything to hope in the future, as their property will be placed on firm foundation under our new Government…I send mail today - some newspapers with the latest war news…", Very Fine.
Scott No. 58X2    $2,000. 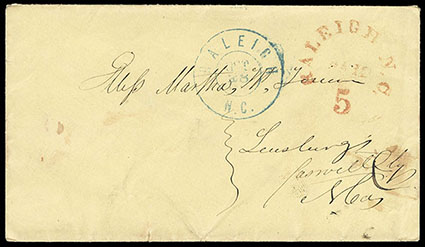