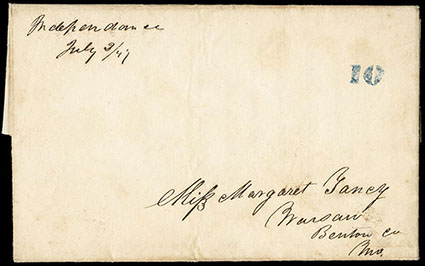 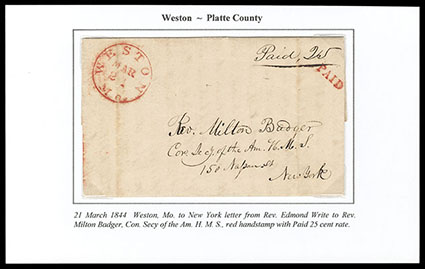 (Indians - Kenekuk and the Kickapoo Indians) Weston Mo. Mar 21, red cds and matching "Paid" handstamp with manuscript "Paid 25" rating on 1844 folded letter to Rev. Milton Badger in New York City, original letter from Rev. E. Wright of the Presbyterian Church: "About four miles from Weston on the opposite side of the river & in sight of W. is the village of Kickapoos - a tribe of Indians numbering about 600 - I passed a Sab. there recently & preached to a small Congregation of them through an interpreter. The Methodists have a mission there - about 40 are members of the Ch. An old Indian of 100 years, gave special attention to the preachings - He lately became a Christian - When converted he enquired of the Minister if Jesus Christ could save an old warrior like him, who had killed so many men. As we went to the Mission Church we saw a large company of Indians gathering to hear Kenekuk the Prophet preach. He does much harm - persuades the Indians that he knows their thoughts & has often been to heaven. He says that white men killed Jesus Christ before he had made an atonement for the Red Men he Kenekuk, is sent to make an atonement for the Indian! It was truly affecting to see them assembling to hear such a vile man. Govt. built him a church about 30x50 (log) but it seems fast going to decay - 2 or 3 of the prophet's former adherents were at our meeting, now hopeful Christians - Kenekuk has an oblong clip on which are carried 5 emblems - which he pretends to have obtained in heaven on one of his visits, & which he calls his bible.", Very Fine and interesting content, ex-Alexander.
Estimate    $500 - 750. 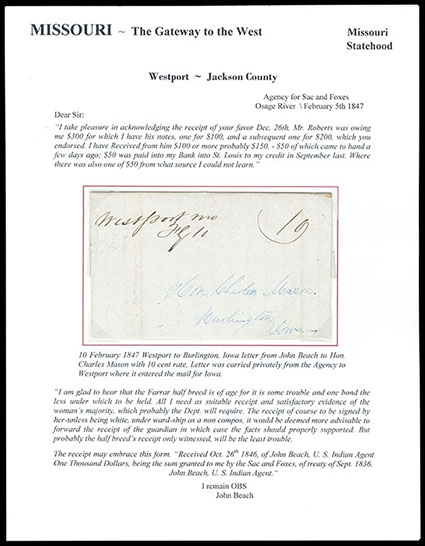 (Indians - Sac & Fox Nation) "Agency For Sacs and Foxes, Osage River, Feby 5th 1847", dateline on folded letter signed by the Indian Agent John Beach to Burlington Iowa, entered mails with "Westport Mo., Feby 10" postmark and matching "10" rating, he is arranging for payment of a treaty award to an Indian girl who has just attained the age of 18 years: "I am glad to hear that the Farrar half breed is of age, for it is some trouble and one bond the less, under which to be held…all I need as a suitable receipt and satisfactory evidence of the woman's majority, which probably the Dept. will require. The receipt of course to be signed by her - unless being white, under wardship as non compos, it would be deemed more advisable to forward the receipt of the guardian in which case the facts should be properly supported. But probably the half breed's receipt only witnessed, will be the least trouble. The receipt…may embrace this form. -" and "Received [place] Octo. 26th 1846, of John Beach, U.S. Indian Agent, One Thousand Dollars, being the sum granted to me by the Sacs and Foxes, per treaty of Sept 1836…", this letter was carried privately from the Agency to Westport where it entered the mails for Burlington, Very Fine, ex-Alexander.
Estimate    $300 - 400. 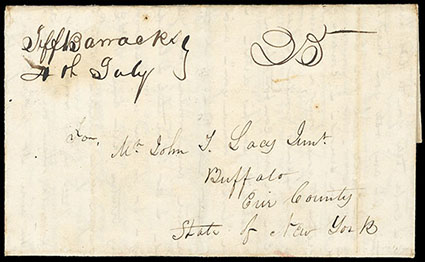 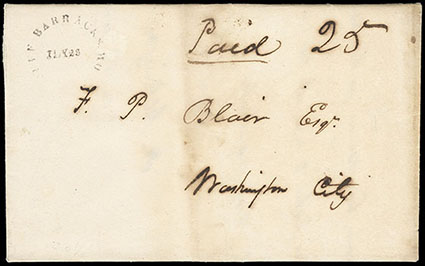 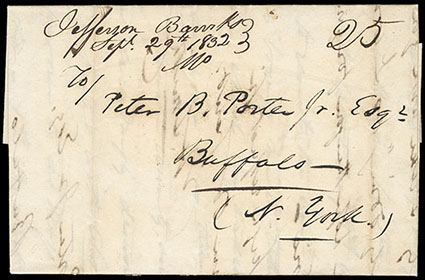 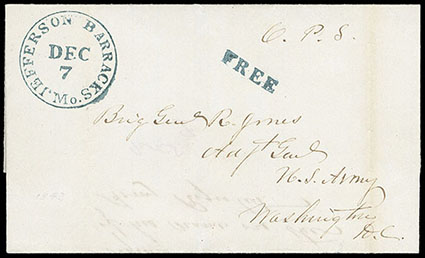 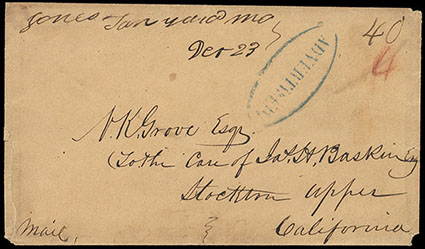 "Jones Tan Yard Mo, Dec 23", manuscript postmark and matching "40" rating on 1850 orange buff cover to Stockton Cal., blue "Advertised" oval and red crayon "4" cent fee rating, original long letter datelined "Callaway County, Mo December 22, 1950" from Mrs. E.M. Grove to her husband N.K. Grove about his gold mining venture reading in part "…I was very sorry to hear your mining has turned out so badly after so much hard labor and exposure but hope that you will be paid for all you labor. Yet you say you are compelled from want of means not to return to Missouri this winter but I think that when Tanner Hamilton can find means to bring him come you might…"; small corner flaws, F.-V.F. with a wonderful letter.
Estimate    $300 - 400. 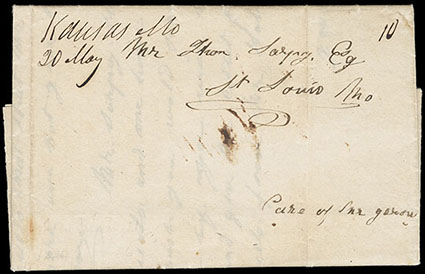 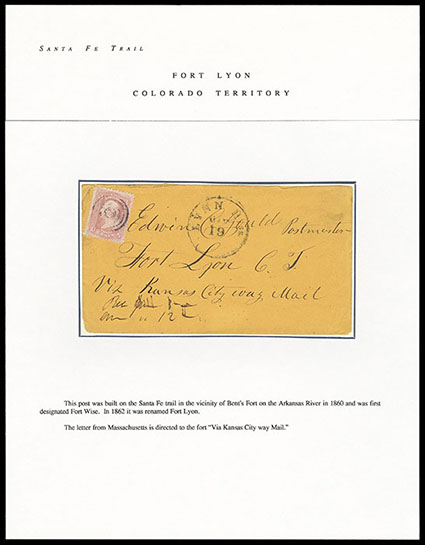