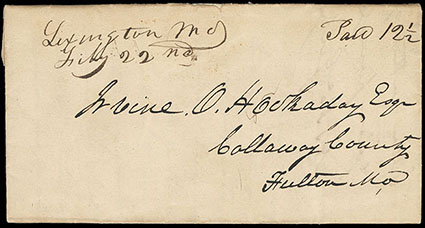 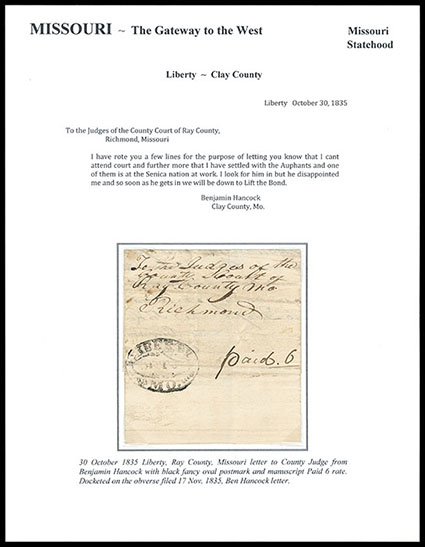 Liberty Mo. Oct 30, fancy oval postmark and manuscript "Paid. 6" rating on 1835 folded letter to the Ray County Judge in Richmond Mo., letter from Benjamin Hancock saying he can not attend court and that he has "settled with the Auphants and one of them is at the Senica nation at work…", F.-V.F., a rare example of the fancy Liberty Mo. oval.
Estimate    $500 - 750. 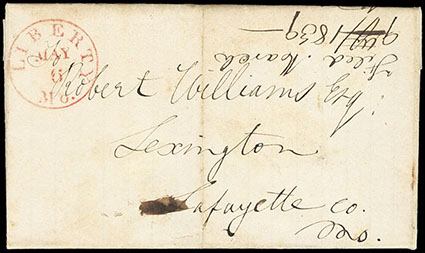 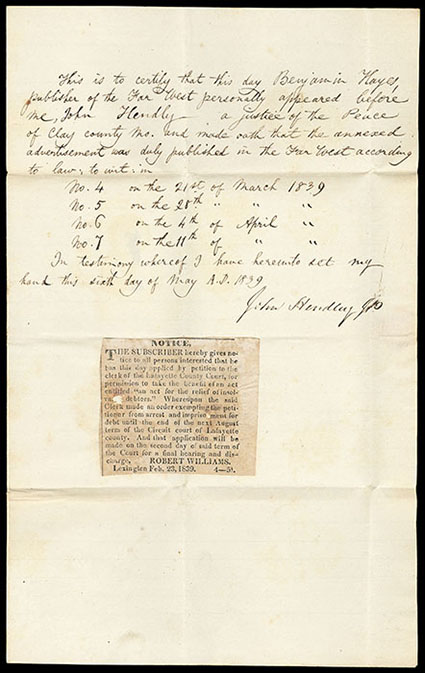 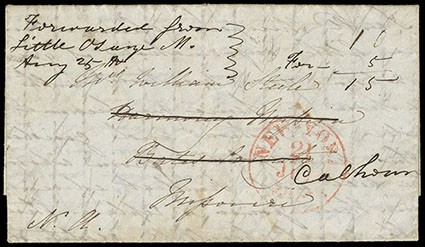 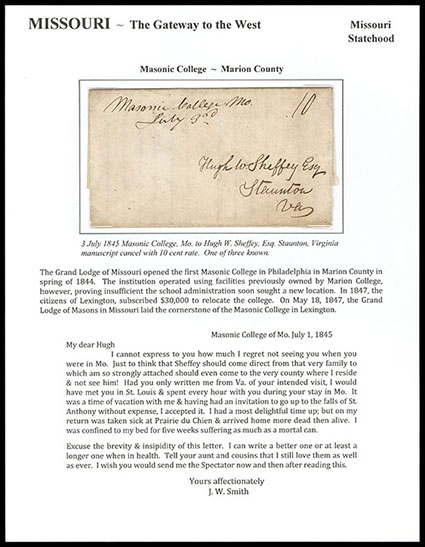 The Grand Lodge of Missouri opened the first Masonic College in Philadelphia in Marion Country in spring of 1844. The institution operated using facilities previously owned by Marion College, however, proving insufficient the school administration soon sought a new location. In 1847, the citizens of Lexington, subscribed $30,000 to relocate the college. On May 18th 1847, the Grand Lodge of Masons in Missouri laid the cornerstone of the Masonic College in Lexington. 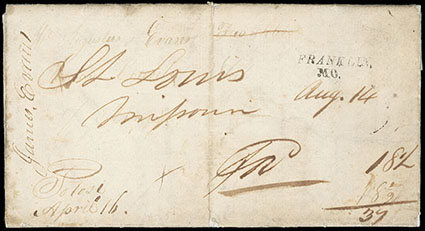 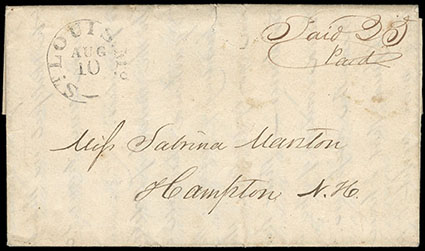 (First Day of Statehood) St. Louis. Mo. Aug 10, black cds and red manuscript "Paid 25" cent rating on folded letter datelined "Fort Armstrong, June 18, 1821" from Maj. Morrell Marston of the 5th Infantry giving a graphic description of the customs and dress of the Sac and Fox Indians who lived in the area: "…Most of them appear to be comfortably & decently clad at all times, if we except grease & dirt; soap is an entire stranger to them, & their clothes are seldom if ever washed;-they never think of even washing their face and hands, indeed so long as the practice of oiling & painting their faces continues … As the men do little or nothing but fight, hunt, dress & dance, all the labor of building huts, making mats, dressing skins, & cultivating com falls on the women…Their huts are built in the shape of a one story country house, but covered with bark; some of them are sixty or eighty feet long…On the right & left of the door of a hut are platforms elevated four or five feet from the ground & covered with mats or skins, these platforms are used for both seats & beds…In the month of October after their com is ripe & gathered they all leave their villages for their hunting grounds; the old men, women & children go by water, the young men by land with their horses-their hunting grounds are on the head waters of the des Moine & Iowa Rivers, near the Missouri…"; top edge tear, still Very Fine and rare use.
Estimate    $500 - 750.

On August 10th 1821, Missouri became the 24th state to be admitted to the Union. This letter was written three weeks earlier at Fort Armstrong and carried privately to St Louis, where it arrived in time to receive that town's postmark on the day of statehood. 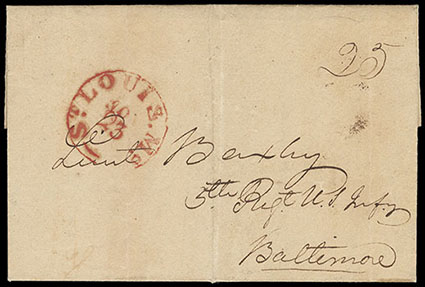 On May 8th 1827, Henry Leavenworth established the fort on the Missouri River that bore his name. As early as March 7th 1827, Colonel Leavenworth was directed, with four regiments, to ascend the Missouri River and established a permanent Cantonment on it left bank. The fort was to be located within twenty miles of the mouth of the Little Platte River; its purpose was to protect travelers on the newly opened Sante Fe Trail. By early July, he began the erection of barracks for his soldiers and the post was named "Cantonment Leavenworth". Thus Leavenworth became the pernament site of the most important military post ever established by the Government in the West. 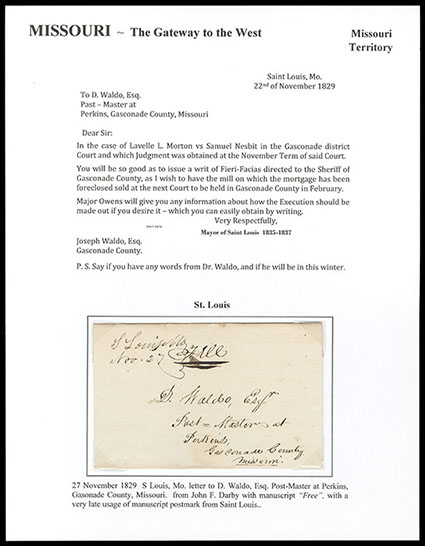 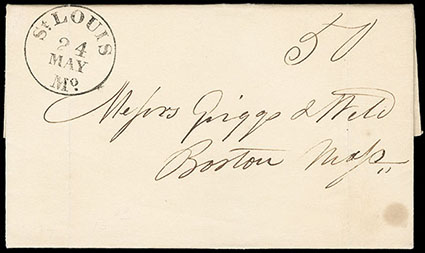