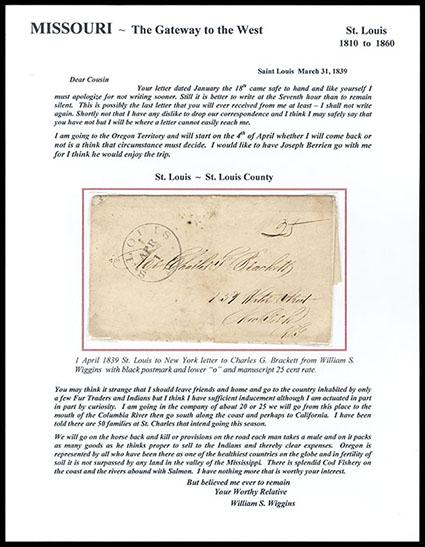 St. Louis Mo. Apr 1, cds with manuscript "25" cent rating on 1839 folded letter to New York N.Y., from William S. Wiggins reading in part "…I am going to the Oregon Territory and will start on the 4th of April whether I will come back or not is a think circumstance must decide.…You may think it strange that I should leave friends and home and go to the country inhabited by only a few Fur Traders and Indians but I think I have sufficient inducement although I am actuated in part by curiosity. I am going in the company of about 20 or 25 we will go from this place to the mouth of the Columbia River then go south along the coast and perhaps to California. I have been told there are 50 families at St. Charles that intend going this season. We will go on the horse back and kill or provisions on the road each man takes a mule and on it packs as many goods as he thinks proper to sell to the Indians and thereby clear expenses. Oregon is represented by all who have been there as one of the healthiest countries on the globe and in fertility of soil it is not surpassed by any land in the valley of the Mississippi. There is splendid Cod Fishery on the coast and rivers abound with Salmon…"; some edge wear and corner nick top left, Very Fine and interesting Pioneer Oregon Trail letter.
Estimate    $200 - 300. 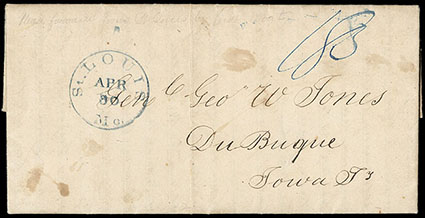 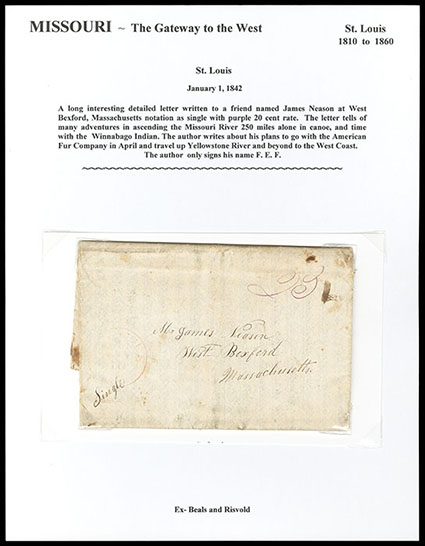 St. Louis Mo., Jan 10, "indistinct red cds and red manuscript "25" rating on 1842 folded letter to West Boxford Mass., long and detailed letter telling of the many adventures in ascending the Missouri River 250 miles alone in a canoe, and time with the Winnebago Indians, plans to go with the American Fur Company in April and travel up the Yellowstone River and beyond to the West Coast, reads in part "…I will now tell you about the last of the Winnebagoes from 3 to 4 thousand assembled at Fort Winnebago to sell their lands. They were supplied so largely with whisky that they became outrageous & murdered one of the traders. The convention broke up with out making a treaty. Soon after a delegation of chiefs went on to Washington & their expenses paid… Here they were treated with much of respect & by ones noted correctness and entertained into every variety of amusement. Present were made of clothing, equipments & ammunition amidst all this attention, they felt to be men of consequence. They now were consulted upon what terms they would dispose of their lands, being rather scrupulous of their authority they hesitated until their doubts were not…It is as individual as the grass of the land which gave them birth & come by arguments, and will over much less in influence were prevailed upon to treaty away their lands. But when they returned to their friends & wigwams among Praries and hill west of Wiskonsin river, they felt had been fascinated & their friends were dissatisfied with the bargain…" and "…I am at St. Louis on board the Steam Boat Illinois, which is laid up at the levee for the winter…There is now about 20 steamers at the levee & on the river & tributaries, 371 some of these as large as a Man of War, carrying tons of freight…They were knocking niggers off at Auction under the hammer like sheep…" An presently the dressy lady took her stand upon the upper steps of the market, for sale bidders stepped up examined her & joked till the wench was bid off like an ox…", full transcript of letter accompanies", Fine, interesting long travel letter with wonderful content, ex-Beals, Risvold.
Estimate    $400 - 600. 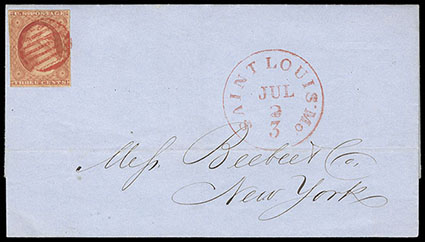 (St. Louis, Mo.) American Express Co. / Livingston, Fargo & Co., St. Louis Mo., black on orange express label, faults, affixed on circa 1856 legal-size buff cover to Peru Ill., forwarded upon arrival with 3¢ dull red (11A) horizontal pair, large margins except in at bottom right, tied by "Peru Ill. 4 May" cds to Princeton Ill., endorsed "Postmaster at Princeton will Pleas cause this to be delivered to the Recorder immediately and oblige, Warren Brown" at bottom left, F.-V.F., a scarce express label and postage stamp combination use.
Estimate    $300 - 400. 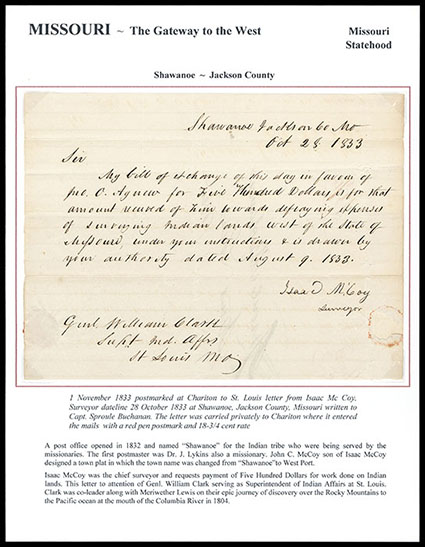 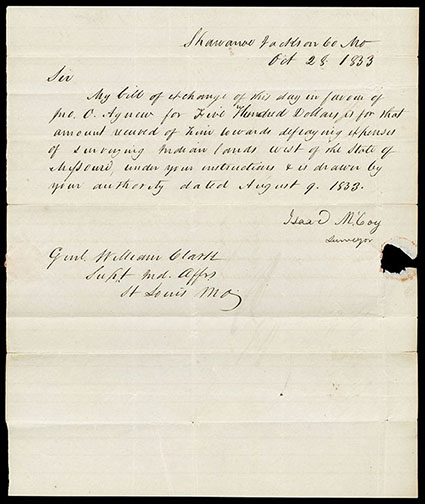 A post office was opened in 1832 and named "Shawanoe" for the Indian tribe who were being served by the missionaries. The first postmaster was missionary Dr. J. Lykins. John C. McCoy, son of Isaac McCoy designed a town plat in which the town name was changed from "Shawanoe" to West Port.

This letter was sent to the attention of General William Clark, who was serving as Superintendent of Indian Affairs at St. Louis. Clark was co-leader along with Meriwether Lewis on their epic journey of discovery over the Rocky Mountains to the Pacific Ocean at the mouth of the Columbia River in 1804. 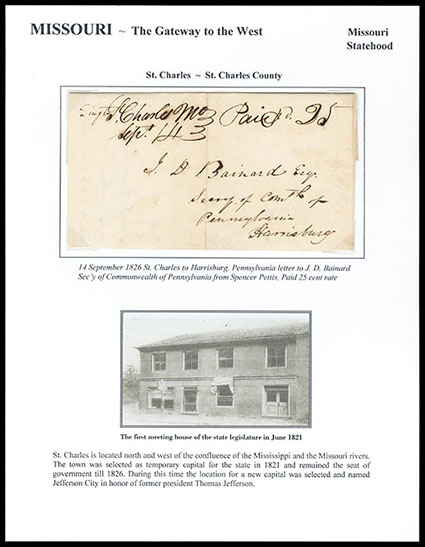 St. Charles is located north and west of the confluence of the Mississippi and the Missouri Rivers. The town was selected as temporary capital for the state in 1821, and remained the seat of government until 1826. During this time, the location for a new capitol was selected and named Jefferson City in honor of former President Thomas Jefferson. 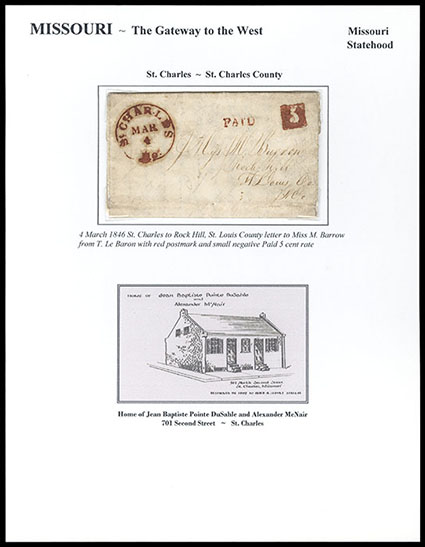 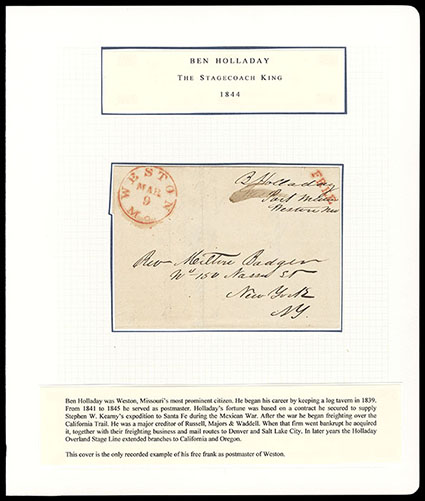 THE ONLY RECORDED EXAMPLE OF STAGECOACH KING BEN HOLLADAY'S FREE FRANK AS POSTMASTER OF WESTON MO.

Ben Holladay was Weston, Missouri's most prominent citizen. He began his career by keeping a log tavern in 1839. From 1841 to 1845 he served as postmaster. Holladay's fortune was based on a contract he secured to supply Stephen W. Keamy's expedition to Santa Fe during the Mexican War. After the war he began freighting over the California Trail. He was a major creditor of Russell, Majors & Waddell. When that firm went bankrupt he acquired it, together with their freighting business and mail routes to Denver and Salt Lake City. In later years the Holladay Overland Stage Line extended branches to California and Oregon.
Complete Images. 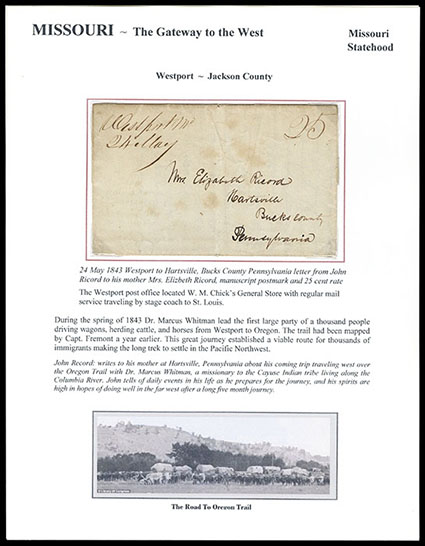 "Westport Mo., 24 May", manuscript postmark and matching rating "25" cent rating on 1843 folded letter to Hartsville, Bucks County, Pa., John Record writes to his mother at Hartsville Pa. about his coming trip traveling west over the Oregon trail with Dr. Marcus Whitman, a missionary to the Cayuse Indian tribe living along the Columbia River. John tells of daily events in his life as he prepares for the journey, and his spirits are high in hopes of doing well in the far west after a long five month journey., F.-V.F., interesting content from the Whitman journey west.
Estimate    $250 - 350.

The Westport post office was located at W.M. Chick's General Store with regular mail service traveling by stage coach to St. Louis. During the spring of 1843, Dr. Marcus Whitman lead the first large party of a thousand people driving wagons, herding cattle and horses from Westport to Oregon. The trail had been mapped by Capt. Fremont a year earlier. This great journey established a viable route for thousands of immigrants making the long trek to settle in the Pacific Northwest.