Business Cover Accumulation, accumulation of mostly business covers - both 6's and 10's - that have as a unifying theme USPS slogan cancels and/or philatelic show hand cancels, wide variety from around the U.S., mounted in Mylar sheet protectors.
Estimate    $100 - 150. 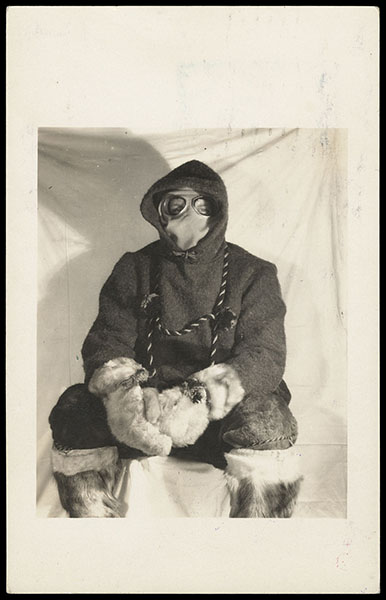 Civil War Correspondence, 1862-66, wonderful correspondence housed in a Lighthouse binder with slipcase to and from Union soldier Sgt. William H. Tucker of Connecticut, who served from November 12, 1861 to December 1865, including more than 30 letters with beautifully legible penmanship revealing great content, highlights include a letter written April 15, 1865 (the day Lincoln died - news had not yet reached him) from Goldsboro, NC, mentioning that General Sherman had "entered Raleigh on the 12th without much opposition" and "Lee's army is taken, but they may try to hangout a spell yet but I hope it may not be long." A letter dated April 18, 1865 from Newhaven, CT acknowledges receipt of a letter from Sgt. Tucker, "We did not know if you were numbered with the dead or was a prisoner, we are glad you are among the living and well," and "Horid news we have of the President's death. It's awful to think of just as we were looking for peace. Perhaps it will come now…Newhaven is draped in mourning…" Another letter from Newhaven dated April 30, 1865 says, "First came the news of the evacuation of Richmond. People were wild with excitement. The next Sunday night (April 9th) about 10 o'clock the news of Lee's surrender was received at the telegraph office, but the blue-nosed mayor of this one-horse city would not allow any demonstration til after 12:00 to be made, so few knew anything about it til that time when the bells rung a fire alarm and got a great many out when bonfires were kindled in almost every street in the city…But joy was soon turned to mourning on Saturday morning (April 15th) it began to be whispered around that Lincoln had been assassinated…" The collection also includes Sgt. Tucker's pocket diary from 1865 with an entry for April 18th reading, "Got the news that Lincoln was killed," and April 19th, "Rec'd a dispatch for the cessation of hostilities," three duplicate pay drafts for $10 each for Sgt. Tucker, 19 covers to Connecticut mostly with 3¢ rose Washington issues, two covers addressed to Sgt. Tucker at Washington D.C. from Connecticut, two Adam's Express "Soldier's Package" covers, one Treasury Dept. Washington D.C. cover to Connecticut, discharge paper dated February 7, 1864 showing Sgt. Tucker's re-enlistment as a Veteran Volunteer, a document appointing him a U.S. Sargent dated November 23, 1863, three carte-de-visite photos (two which may be Sgt. Tucker), also noted is a letter from the Paymaster General's Office State of Connecticut at New Haven dated December 2, 1865 with a $10 State payment to volunteers and cover postmarked December 2 New Haven, CT bearing Star of David cancel, ironically sent one day before he was "dashed against a tree while on horseback on December 3, dying three days later at the age of 24", other correspondence includes letters regarding returning his body to Connecticut. Sgt. Tucker survived the Civil War and wound up dying in an equestrian accident, unusual to find an intact archive more than 100 years after the end of the war between the States, invaluable to a student of these events, generally fine or better condition throughout.
Estimate    $3,000 - 4,000. 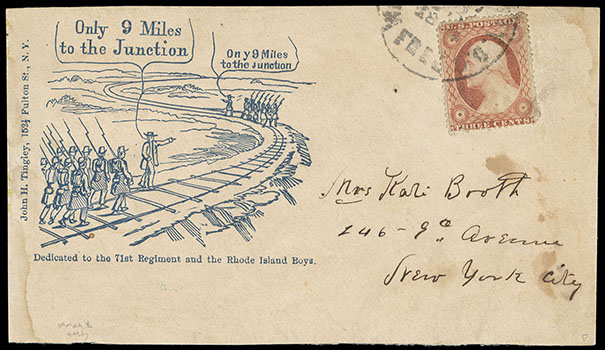 Classic Cover Group, 1847-69, of approximately 40 mostly better covers; starting with a #1b use (with cert), #7 strip of three (with cert), many 4-margin #11's in shades, sheet margin, green cancels, etc., 1857 issues with interesting 3¢ usages including captured imprint, green cancel, allover advertising, early W.F. & Co. express, #35 pair to Canada, #37 on patriotic cover to England (stamp color chemically affected), 1861 usages starting with nice #64 & 64b usages (with certs), patriotics, 1¢+3¢ carrier usages, #68+76 x2 from San Francisco, multiple 3¢ + 2¢ Blackjack franking to Nova Scotia, #78 to England (cert), 30¢ usages including with 3¢ to Switzerland and solo usage on patriotic to France, 1868 usages including campaign cover and a few foreign destinations; condition varies with many attractive usage throughout, inspection a must.
Estimate    $1,500 - 2,000.

Classic Issue Cover Balance, 1851-69, of several hundred sleeved covers, mostly 3¢ usages from an array of towns, including many corner card covers, fancy cancels, illustrated ads and patriotics; with some better throughout including #35 strip of three to France, single usage from Placerville, Cal. "Overland via Los Angeles", #25+36 combination to France, #36 pair to England, 63+65 carrier combinations, #68 to P.E.I. and New Brunswick, #76 x2 to Canada, #78 Cincinnati to England, nice section of 1869 issues including 1¢ strip of three use, three 6¢ solo usages and 10¢ to Germany and much more, also includes a few stampless covers; condition varies, worth evaluation.
Estimate    $2,000 - 3,000. 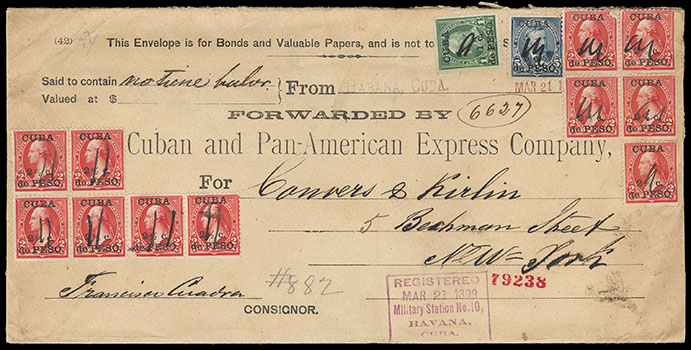 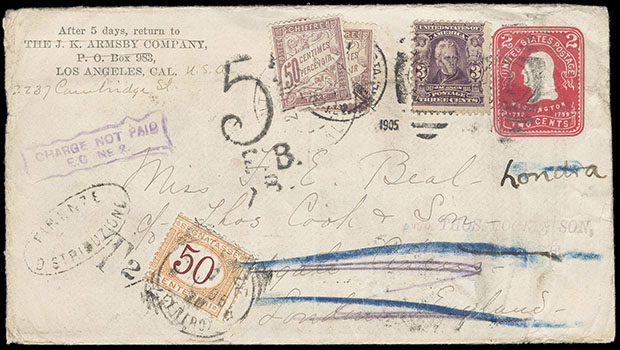 Cover Assortment, Several hundred, some 19th Century, starting with 3c 1857 uses, a few illustrated advertising, 20th Century commercial, philatelic and postcards, the most interesting is a 1905 cover sent to London and forwarded, with postage due stamps of both France and Italy applied, 1846 Philadelphia "United States Hotel" red handstamp stampless use; and 1850s #11A use with blue United States Hotel cameo corner card; mixed condition.
Estimate    $400 - 600.