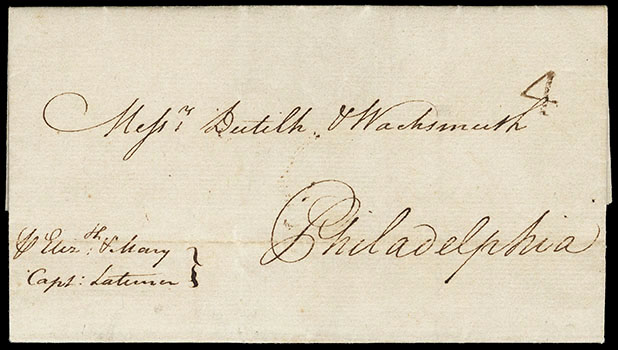 The Philadelphia 12mm "4" rating handstamp is recorded from 1792-1799 with only fifteen recorded examples. 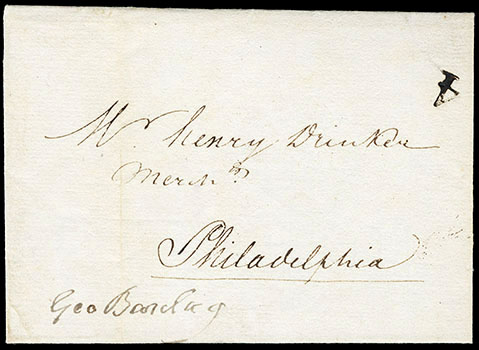 Philadelphia was the only city to use a handstamp 4 device. Four sizes of typeface were used to indicate this rate; a census records that all four comprise only 26 examples. The Philadelphia 8mm "4" rating handstamp is recorded from 1793-1794 with only fifteen recorded examples. 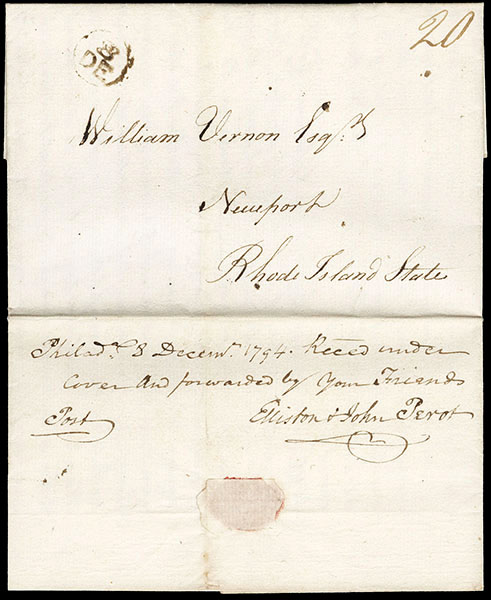 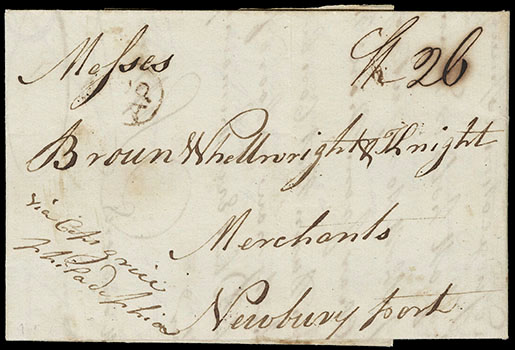 1796 (Mar. 11) Montserrat to Newburyport Mass., "datelined folded letter endorsed "via Capt grice, philadelphia", sent unpaid by private ship, entered mails with partial Philadelphia "5 AP" Franklin mark and manuscript "Sh 26" rating for inland postage plus 2¢ ship fee, letter of Stephen Holland headed "Moserate" and reads in part "…we were obliged to…go under the Le of Antegar the weather being thick & very dark at 10pm was Brought to by the gangers a British 74 gun ship & a small Schooner her tender & we were order'd on board with our papers…the Capt. whose name is Laforing…conceived that our property on board was of french & could not be american property & after that order'd us on board…to take us in to Antegar but the wind still being to the northward order'd us to Monserate whare we arrived at 3pm & Anchord in Plymouth Bay for adjudication…I was order'd on shore without Capt. Hoyt to be Examined & to go through the Interogatives…how the Business will turn god only knows for I don't know…"; docketed as received Apr. 11th, F.-V.F. and rare early incoming letter from Montserrat with news of ship seizure by British.
Estimate    $300 - 400. 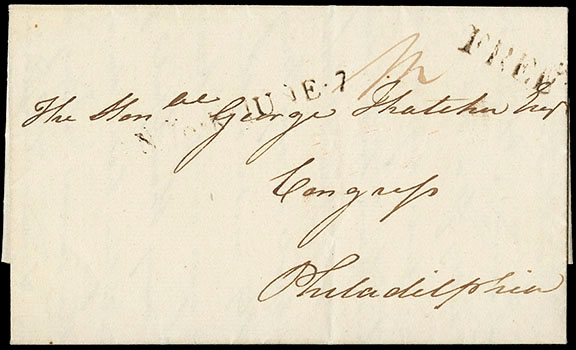 The addressee, George Thatcher (1754-1824) graduated from Harvard in 1776. He was a delegate to the Continental Congress and was later elected by the District of Maine as a Federalist to every Congress from 1789 until his retirement in 1801. He once wrote "Parties are not necessary to the existence or support of political liberty". He did not think a Bill of Rights was necessary either. 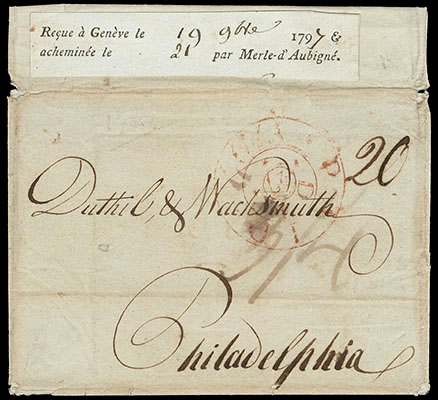 The Dutilh & Wachsmuth firm started in 1790 and engaged in the coffee and sugar trade between the West Indies and Europe.

The Act of 1797, 37 Geo III was effective 5 January 1797 with the packet rate remaining 1s, but must include 8d inland postage from London, and inland postage to London if posted elsewhere 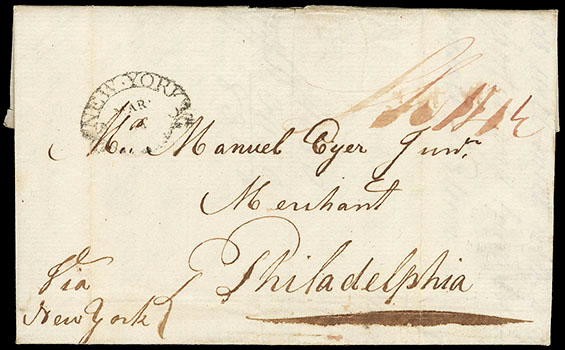 1800 (Feb. 6) Nassau, Bahamas to Philadelphia Pa. via New York, datelined folded letter written and signed by Jacob Weiser to merchant Manuel Tyer with interesting content "…the Schooner Weymouth which is now called the Eliz. She was captured on her passage from Cape Francois to Baltimore by a French Privateer and afterwards re-captured by the U.S. Frigates General Green and Boston, put into this port in distress…thoroughly overhauled and now in compleat order.", cover endorsed "Via New York" at lower left, carried by private ship, entered mails with "New-York, Mar 14" clamshell postmark and red manuscript "Sh 14½" due rating for 12½¢ inland postage plus 2¢ ship fee, Very Fine and interesting privateering content.
Estimate    $400 - 600. 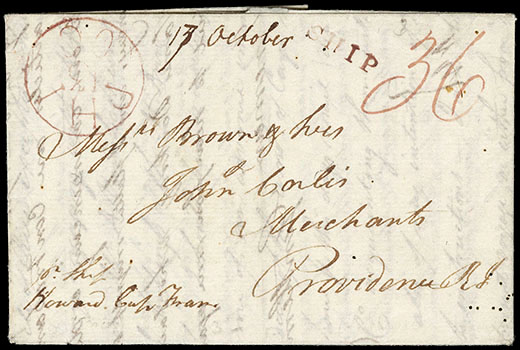 Philadelphia was the first city in the United States to introduce a "SHIP" handstamp, and this type was used until 1804. New York put a similar postmark into use in 1806. 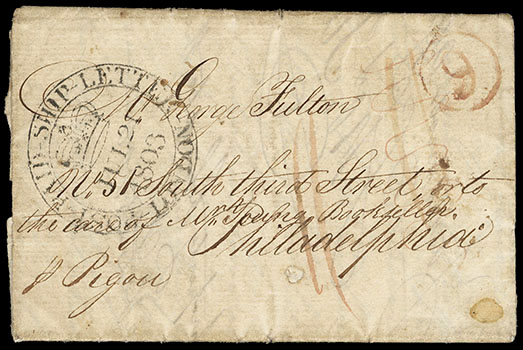 THE ONLY RECORDED USE OF THIS LONDON POSTMARK ON A LETTER TO PHILADELPHIA.

Prepayment of ship letters was not permissible until 1799. Act 39 Geo III c 76 allowed private ships to carry mail for the post office at "not less than half the packet rate". This was amended by GPO notice in 1803 to be exactly half the packet rate, and required letters to be held in sealed bags. Prepaid ship letters are very rare, as letters were normally sent unpaid. 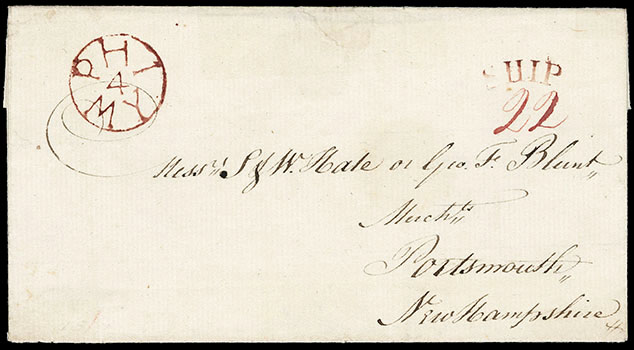