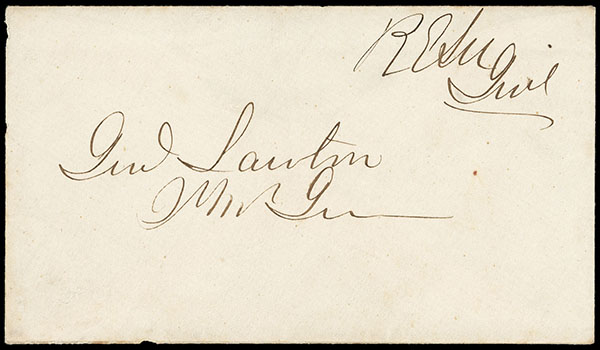 The addressee, Alexander Robert Lawton (1818-1896) was a lawyer, politician, diplomat and brigadier general in the Confederate States Army during the American Civil War. Lawton favored Georgia's secession and became colonel of the 1st Georgia Volunteers. He commanded the Savannah troops that seized Fort Pulaski, the first conflict of the war in Georgia. He was commissioned a brigadier general in the Confederate Army on April 13, 1861, and commanded the forces guarding Georgia's seacoast before being reassigned to Virginia. He led his brigade effectively during Stonewall Jackson's Shenandoah Valley Campaign, the Seven Days Battles, and the Second Battle of Bull Run (Second Manassas). His last field service was at the Battle of Antietam (Sharpsburg), where he commanded the division of the wounded Maj. Gen. Richard S. Ewell. Lawton was seriously wounded early in the morning of September 17, 1862, while defending his portion of the Army of Northern Virginia's line. Initially carried from the field to a temporary hospital, he spent months at home recuperating. In August 1863, Lawton became the Confederacy's second Quartermaster-General, which was located in Richmond Va. on the corner of Ninth and Main Street. Although he brought energy and resourcefulness to the position, he was unable to solve the problem of material shortages and poorly regulated railroads.

General Robert E. Lee's letters sent from the field were enclosed in envelopes signed "R. E. Lee, Genl". The letters and other important papers were carried by military courier, usually to Richmond. Letters addressed to locations outside Richmond were mailed at the post office with postage prepaid.