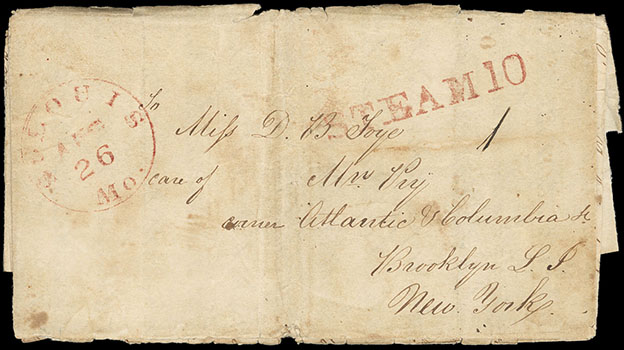 (General Kearny Return Expedition) Pueblo de Los Angeles, Upper California, May 20, 1847, dateline on lengthy 3-page letter to Brooklyn, N.Y. sent by soldier in N.Y. Vols regiment to sister, gives account of voyage to San Francisco by sea…"we landed in San Francisco which contains about 500 inhabitants"…"Next we went to Monterey the Colonel having orders to proceed there with four companies"…"so we embarked on board the U.S. Ship Lexington and finally arrived"…"Well again we had just got settled when news arrived that Genl. Bustament was coming towards Pueblo de los Angeles so we were ordered to meet him and Genl. Kearny came down with us. We landed at a placed called Santa Pedro"…"about nine in the morning we marched to Pueblo and arrived before dark"…"we arrived here but Bustament has not come and I do not think he will if he does he will have a warm reception for we are very strong here besides a fortification we have thrown up.", includes a post script "we could whip 2000 Mexicans", entered mails with red "St. Louis Mo., Aug 26" cds and matching "STEAM 10" straightline rating handstamp; cover intact with splitting and some separation along folds, Fine.
Estimate    $5,000 - 7,500.

A REMARKABLE USE CARRIED OVERLAND BY BRIG. GENERAL KEARNY FROM CALIFORNIA TO FORT LEAVENWORTH.

Heading toward California, Kearny was informed that the conquest had already been completed by Commodore Robert F. Stockton and Lieutenant Colonel John C. Frémont. With a force reduced to only 120 dragoons, Kearny arrived in early December to discover that rebellious Mexican-Californians had retaken most of the province. Stockton had proclaimed himself governor of California and refused to accept Kearny's authority. Because he wished to preserve harmony and because Stockton's men constituted the bulk of available U.S. forces, Kearny accepted the situation and led the combined army-navy command to Los Angeles, defeating the Mexicans at San Gabriel (Jan. 8, 1847) and the Mesa (January 9), thus ending the resistance.

This letter was carried by military express to Monterey and then overland May 31, 1847 by Brig. General Stephen Watts Kearny to Fort Leavenworth arriving on August 22. At Fort Leavenworth, Kearny, on his way to Washington D.C., boarded the steamboat "Amelia" August 23rd to St Louis and deposited his mail. They were postmarked upon arrival in St. Louis August 26th with 10¢ due.

Kearny was returning from the campaign that conquered California during the Mexican War; he brought Lt. Col. John C. Fremont with him - under arrest - for attempting to usurp Kearny's authority there. The trip over the California-Oregon trail took 66 days. Putnam had apparently been in charge of the ships mentioned in the letter that were carrying supplies to the Army in California. 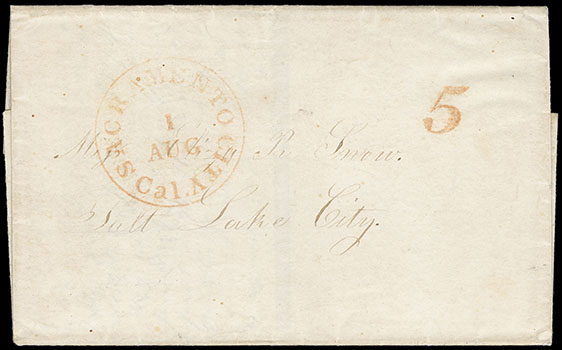 Sacramento City, Cal., Aug 1, red cds and matching "5" rate on 1852 folded letter sheet from missionaries on their way to Tahiti, with postscript message dated May 9th which reads in part…"now on the one previous to the departure of the new ship for Tahiti and chain Islands"…"fifty persons are going on the ship they will be very much crowded", Very Fine.
Estimate    $500 - 750. 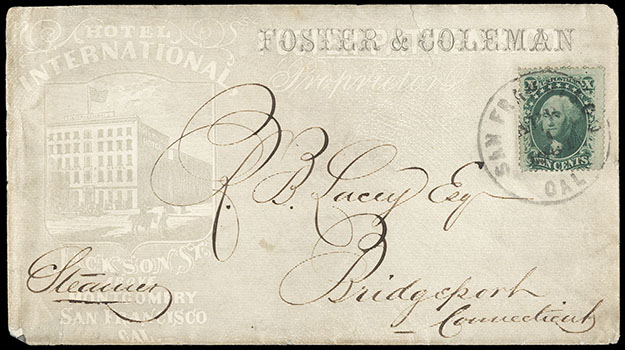 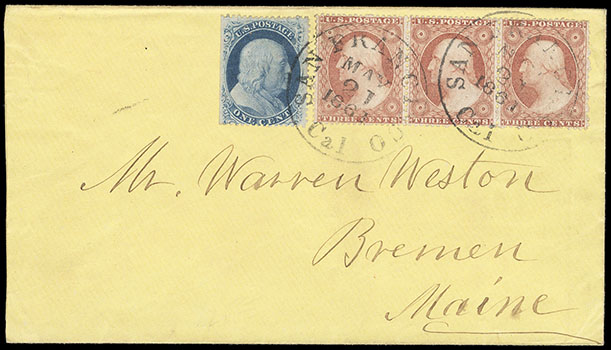 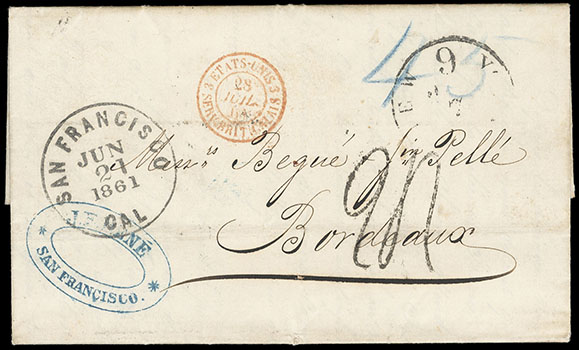 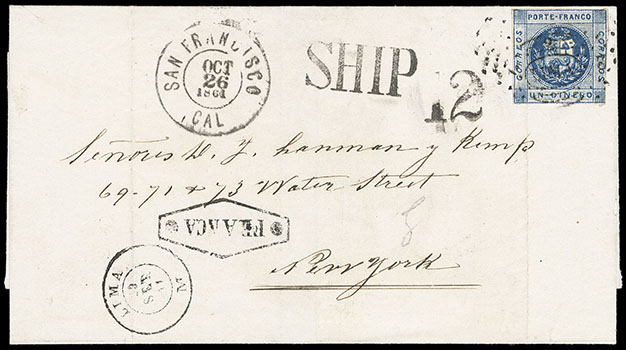 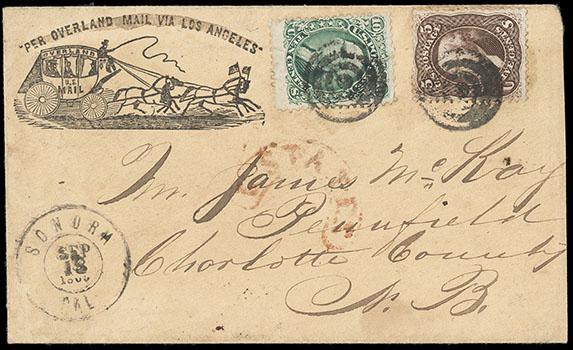