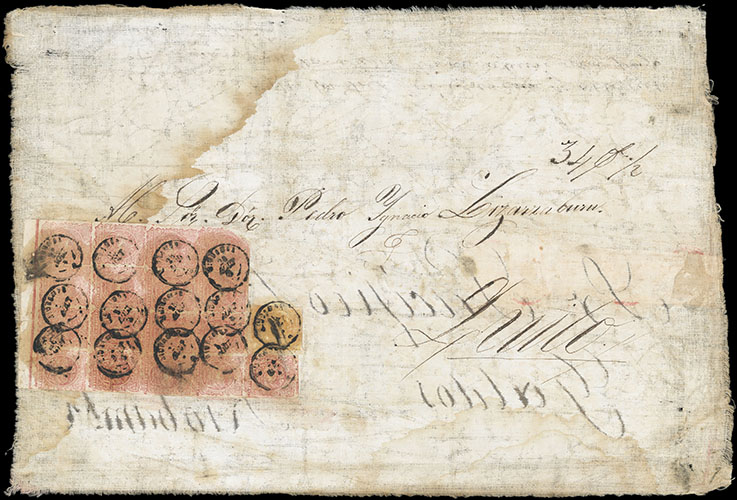 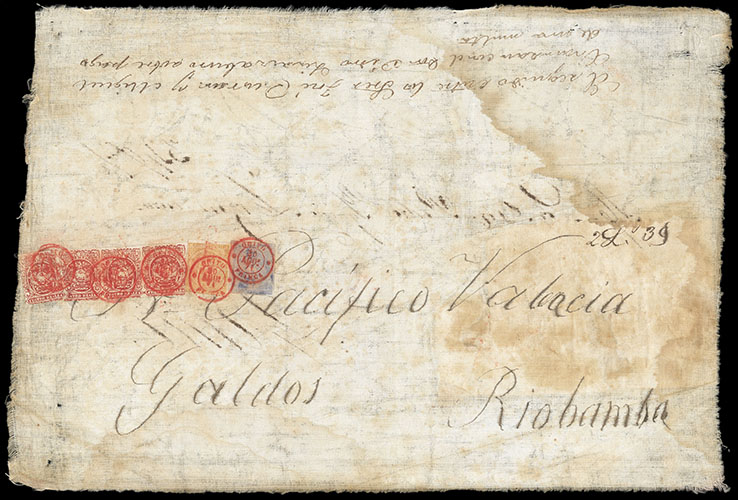 THE LARGEST USED MULTIPLE OF THE 1866 4 REALES ISSUE ON A TURNED WRAPPER SHOWING BOTH OFFICIAL AND NON-OFFICIAL RATES - THIS IS THE LARGEST RECORDED FRANKING IN THE CLASSIC PERIOD OF ECUADOR AND CONSIDERED TO BE THE MOST IMPORTANT ITEM OF ECUADORIAN PHILATELY. 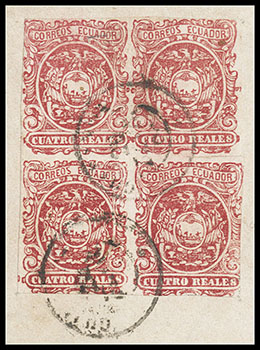 THE UNIQUE ON COVER USAGE OF THE 1866 4R ISSUE IN A BLOCK OF FOUR - THE SCARCEST OF THE FIRST ISSUE VALUES AND ONE OF THREE MOST SIGNIFICANT COVERS IN ECUADORIAN PHILATELY. 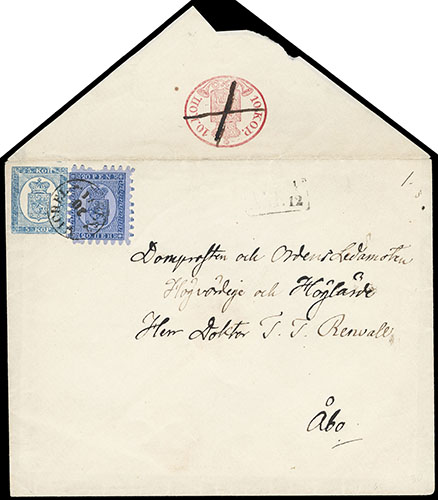 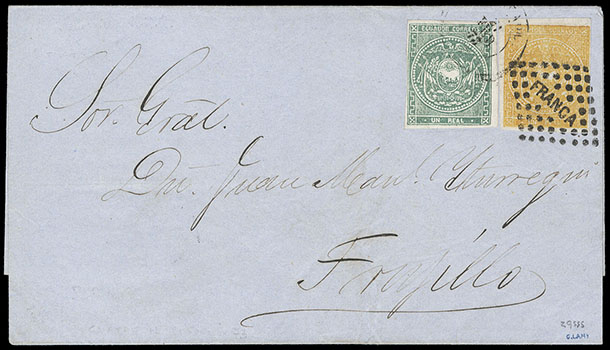 ONE OF TWO PRIVATE CORRESPONDENCES KNOWN BEARING SAME DENOMINATION OF THE 1865 1 REAL STAMPS IN GREEN AND YELLOW.

Only five covers are known bearing same denomination 1 real represented by the different stamps in the issued colors green and yellow. This cover is even more remarkable as it represents private mail and that the 1r green is the scarce embossed arms variety. 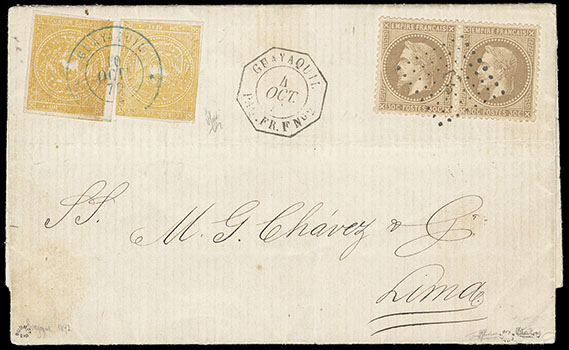 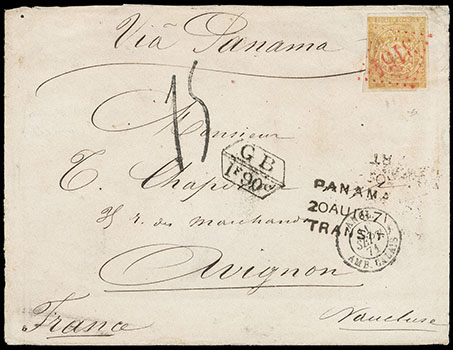 Ecuador, 1865, 1r orange yellow, clear to large margins, tied by red "3154" in dotted lozenge cancel of Quito on cover to Avignon, France paying the double internal postage rate within Ecuador, forwarded through the British P.O. with "Guayaquil, Au 9, 1871" double arc cds, carried by the PSNC steamer to Panama with "Panama Transit, 20 Au, 1871" date stamp of the British P.O. at the Isthmus, then carried by British ship to England with "GB/1F90c" Anglo-French accountancy marking applied on single rate mail from the Pacific Coast, French entry at Calais and "15" decimes due handstamp, Very Fine, only about seven covers are recorded franked with first issue stamps to a transatlantic destination; with 2013 Moorhouse certificate.
Scott No. 4    Estimate $10,000 - 15,000.

AN EXTREMELY RARE FIRST ISSUE USAGE ON A TRANSATLANTIC COVER TO FRANCE. 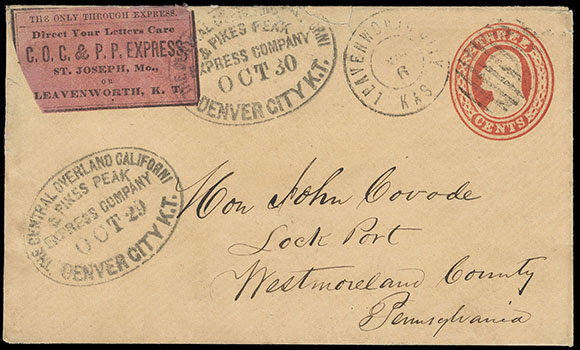 ONE OF ONLY SIX RECORDED EXAMPLES OF THE CENTRAL OVERLAND CALIFORNIA & PIKE'S PEAK EXPRESS MAGENTA LABEL ON COVER.

This company was the immediate predecessor of The Pony Express. It was organized by the firm of Russell, Majors & Waddell for the purpose of saving the partnership's freighting operations to army posts in the West. They were one of two firms that carried mail to the Pike's Peak region when the gold rush began there. COC&PPE had obtained the mail contract from St. Joseph to Salt Lake City operating over the Platte River Road. They carried the express Pike's Peak mail over this route as far as Julesburg, where it was diverted south to Denver, which had a post office, but no mail route serving the town.

The backflap has a third strike of the "Central Overland California & Pikes Peak Express Company, Denver City K.T." oval handstamp dated "Oct. 7". These envelopes were available for purchase prior to use and this handstamp reflects the date of sale. 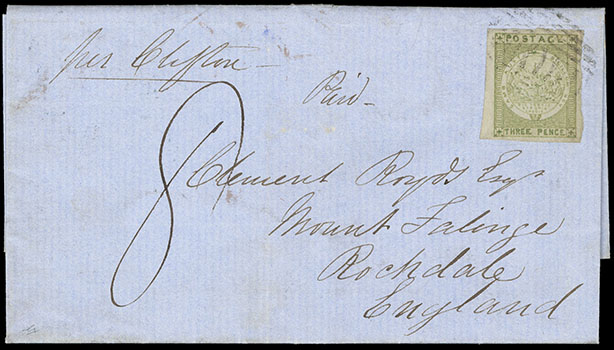 AN OUTSTANDING USAGE OF THE 1850 3D SYDNEY VIEW ISSUE ON COVER TO ENGLAND. 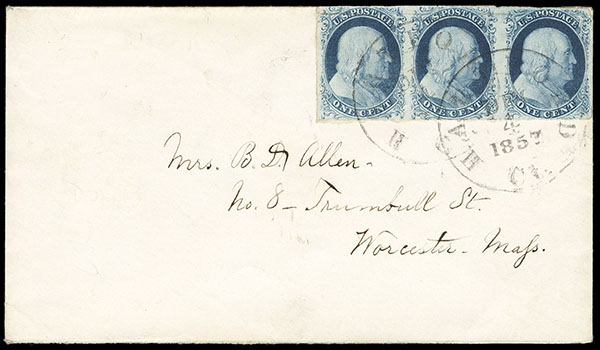 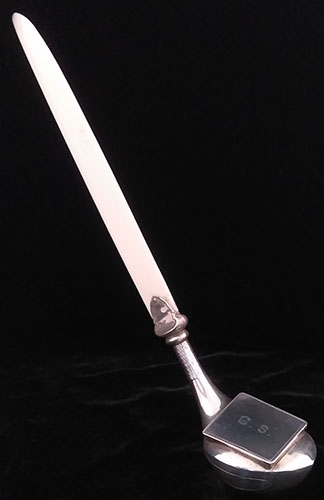 Silver Box, Crisford & Norris (Birmingham) 1908, sterling silver stamp box and ivory letter opener combination (35x225mm), novelty golf club form, club head with a hinged lid at top opening to a single concave compartment, an extremely rare design and one of the most sought after boxes missing from most of the great collections that have come on to the market.
Estimate    $3,000 - 4,000.