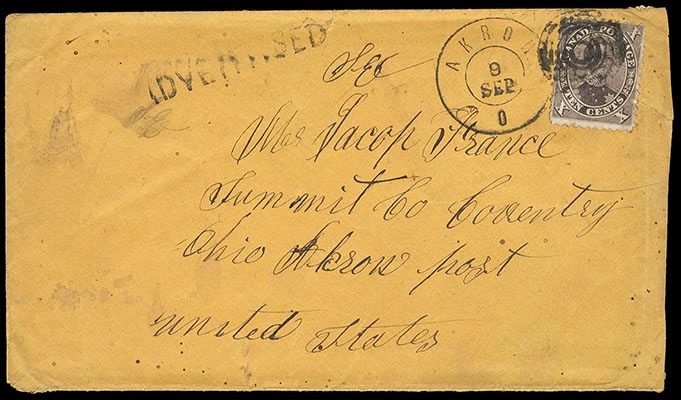 1863 Draft Dodger Writes from Canada to Friends in Akron, Ohio, orange cover bearing Canada, 1859, 10c Brown (17b; SG 36) tied by target to Akron Oh., also with "Akron O. 9 Sep." double-circle datestamp and "ADVERTISED" handstamp, with original enclosure dated "August the 30 1863" which includes "…Glad that I skaddled from war. I live happy and free and I have my meals three times a day and a good bed to sleep. Money or not I will stay in Canada…"; typed transcript accompanies, cover slightly reduced at right and minor wear, stamp with tiny tear and light corner crease, F.-V.F., a rare draft-dodger letter.
Estimate    $500 - 750. 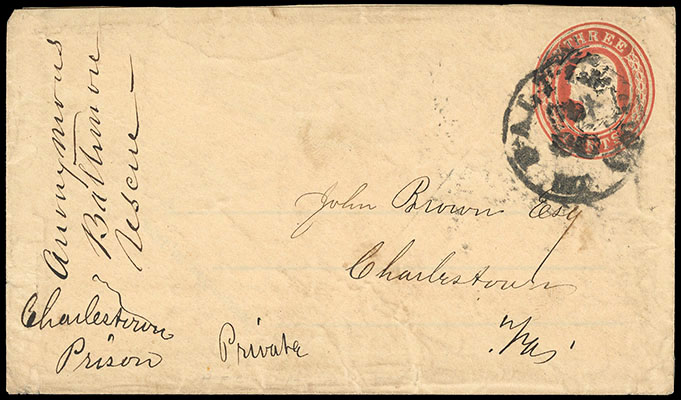 A RARE 1859 USE ADDRESSED TO JOHN BROWN AS PRISONER AT CHARLESTOWN PRISON.

John Brown was an ardent abolitionist who believed it was his duty to fight pro-slavery settlers in Kansas. He hoped that a dramatic act would inspire a slave revolt and led 20 men in an attack on the Union Army Arsenal at Harpers Ferry, Va. on October 16, 1859. He was captured two days later and hung December 2, 1859 after being convicted of treason. 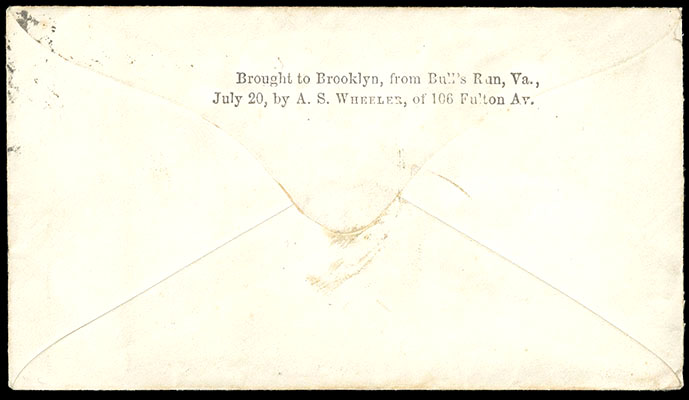 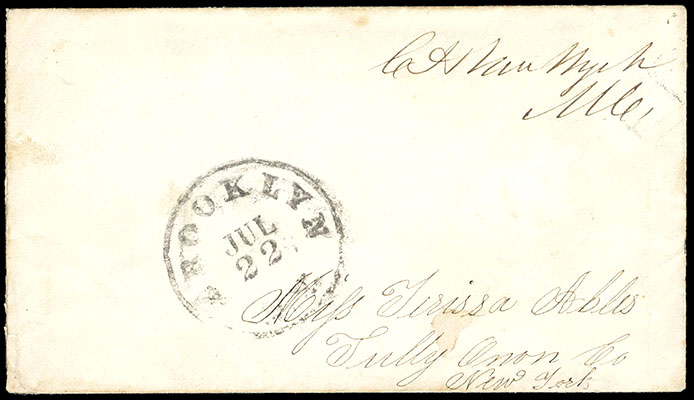 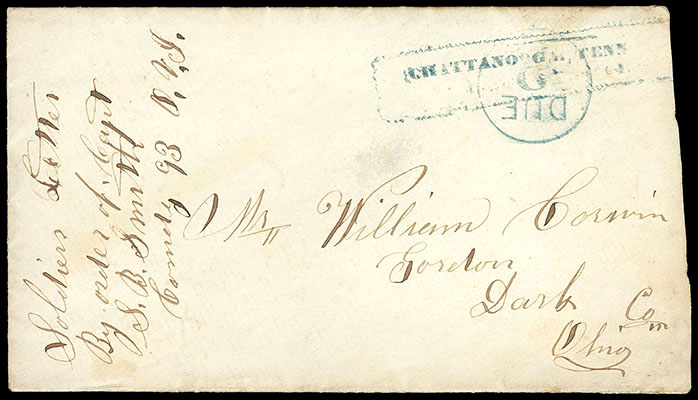 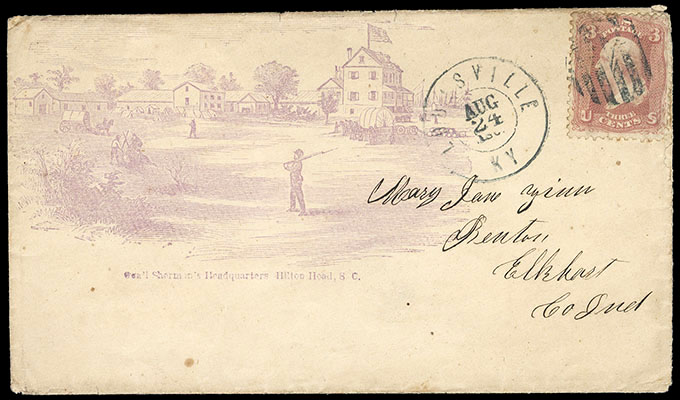 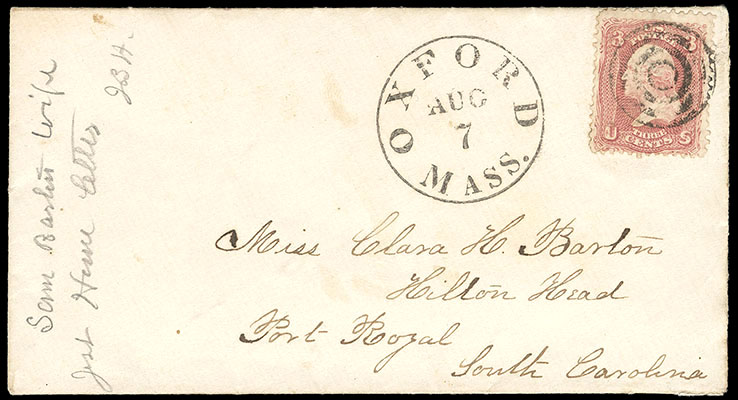 Clarrisa Harlowe Barton (1821-1912) was a pioneering American nurse who founded the American Red Cross. She was a hospital nurse in the American Civil War, a teacher, and patent clerk. Nursing education was not very formalized at that time and she did not attend nursing school, so she provided self-taught nursing care. During the war she filled a void left by the U.S. Government, the U.S. Sanitary Commission and the U.S. Christian Commission, to supply wounded and suffering Union soldiers with their basic needs in nutrition, clothes and medical attention.

James Birdseye McPherson (1828-1864) was a career United States Army officer who served as a General in the Union Army during the American Civil War. McPherson was on the General's staff of Henry Halleck and later, of Ulysses S. Grant and was with Grant at the Battle of Shiloh. He was killed at the Battle of Atlanta, facing the army of his old West Point classmate John Bell Hood, who paid a warm tribute to his character. He was the second-highest-ranking Union officer killed in action during the war. 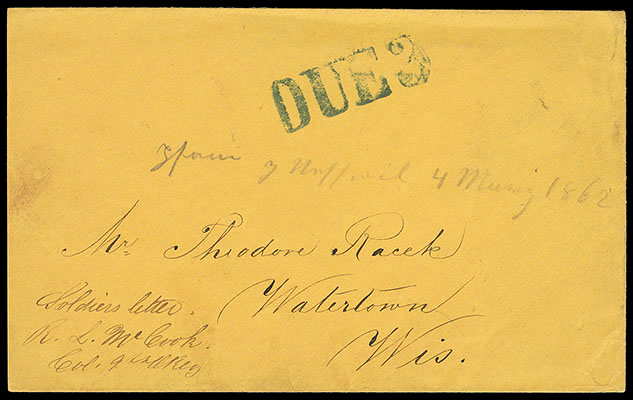 Robert Latimer McCook was one of the "Fighting McCook's" from New Lisbon, Ohio. This families offspring had a total of 15 in the Union Army, six of which reached the rank of Brigadier General. The northern version of Robert's death near Huntsville, Alabama on August 6th 1862 states that he had been wounded and was lying helpless in an ambulance when Confederate Guerillas from the 4th Alabama Cavalry came and shot him in the intestines. He died in agony the next day. 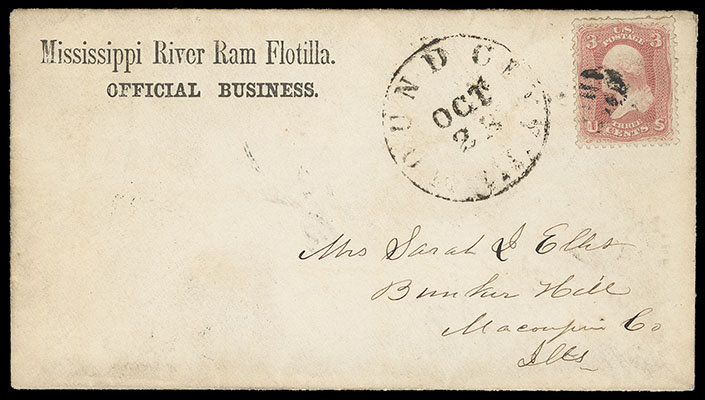 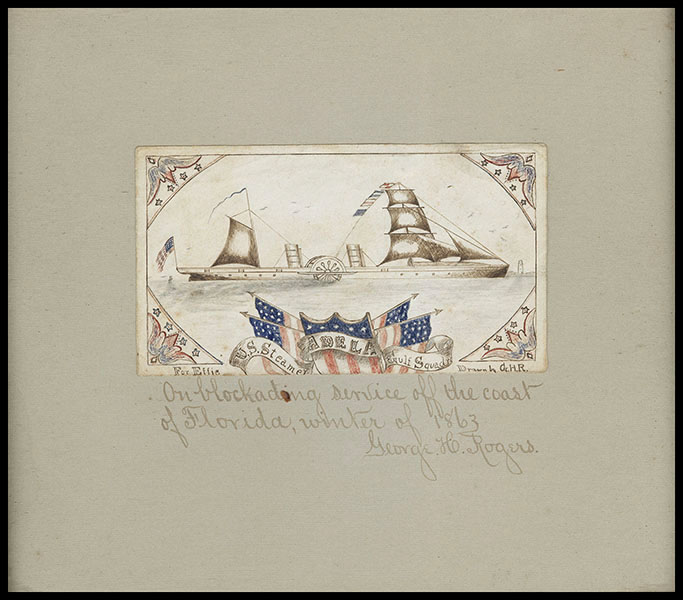 U.S. Steamer Adela, hand-drawn multicolor patriotic illustration showing steamship on 130x73mm card framed and mounted on backing paper inscribed below "On blockading service of the coast of Florida, winter of 1863, George H. Rogers", who was a Naval Apothecary on the Adela, Very Fine and attractive.
Estimate    $400 - 600. 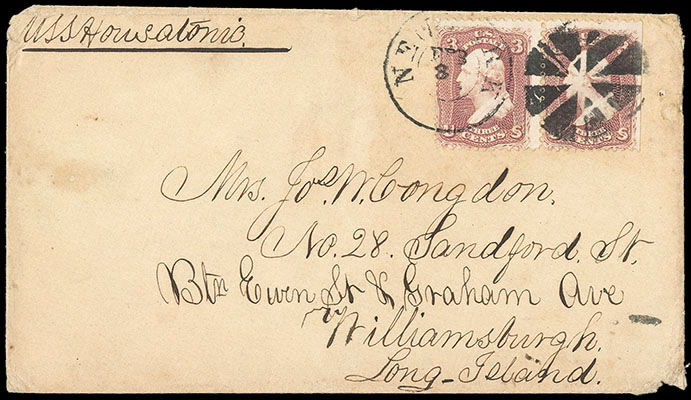 On February 17, 1864, the Confederate submarine "Hunley" sank a blockader, the USS "Housatonic" off Charleston S.C., marking the first wartime sinking of a ship by a submarine. The addressee was one of 21 officers and 129 men rescued by the "Canandaigua" following the sinking of the "Housatonic". The February 16th use was posted one day before the USS "Housatonic" sunk. The Congdon correspondence is known however virtually all the covers are addressed from the Housatonic to Congdon's wife in Long Island.