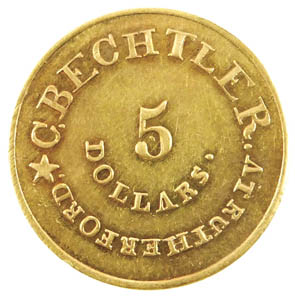 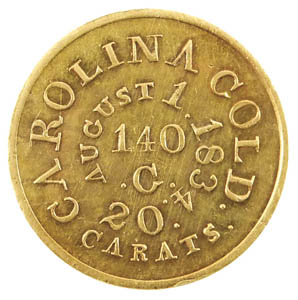 Christopher Bechtler, 5 DOLLARS CAROLINA, 140 gr. 20 carats. Plain edge. PCGS graded AU-55. The Bechtler family made its first gold coins--gold dollars, quarter eagles, and half eagles--in 1831, predating the U.S. Mint by some 18 years. In 1834, when the melt value of federal gold coins exceeded its face value, the gold content was adjusted, and gold coins actually began circulating for the first time in many years, rather than being hoarded or melted. Treasury officials advised the Mint to put the date of the authorizing legislation on the federal coins, but they were redesigned instead. Christopher Bechtler chose a different path, putting the date on the family coinage but keeping the familiar appearance that helped ensure their trusted status and circulation in the local economy.

There are several variants of the 1834-37 five dollars, including reeded edge and plain edge varieties. This piece is also in spectacular condition. The still-lustrous greenish-gold surfaces are remarkably clean. (PCGS Pop. 3 in AU-55, only 8 graded higher, the highest grade being a single MS-62 example, and a total of 27 in all grades, 9/24/11).
Estimate $5,000 - 7,500.