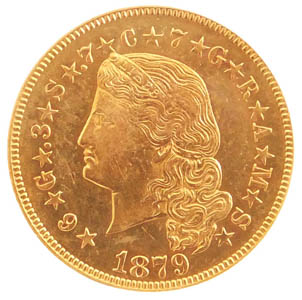 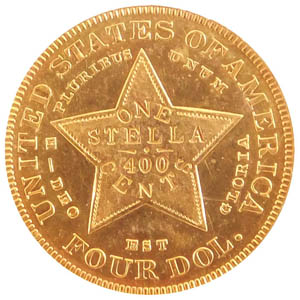 1879 $4 Stella. Flowing Hair. PCGS graded Proof 58 in first generation holder. These pattern coins were first suggested by John A. Kasson, then U.S. envoy extraordinary and minister plenipotentiary to Austria-Hungary. It was through the efforts of W.W. Hubbell, who patented the alloy goloid (used in making another pattern piece, the goloid metric dollar), that we have these beautiful and interesting coins.

The four-dollar Stella - so called because of the five-pointed star on the reverse was envisioned by Kasson as America's answer to various foreign gold coins popular in the international market. The British sovereign, Italy's 20 lire, and the 20 pesetas of Spain were three such coins: each smaller than a U.S. five-dollar gold piece, they were used widely in international trade.

The Stella was one of many proposals made to Congress for an international trade coin, and one of only several that made it to pattern-coin form (others include the 1868 five-dollar piece and 1874 Bickford ten-dollar piece).

Odds were stacked against the Stella from the start. The denomination of four U.S. dollars didn't match any of the coin's European counterparts, and at any rate the U.S. double eagle (twenty-dollar coin)-already used in international commerce was a more convenient medium of exchange. The Stella was never minted for circulation. Those dated 1879 were struck for congressmen to examine. The 1880 coins were secretly made by Mint officials for sale to private collectors.

There are two distinct types in both years of issue. Charles E. Barber designed the Flowing Hair type, and George T. Morgan the Coiled Hair. They were struck as patterns in gold, aluminum, copper, and white metal. (Only those struck in gold are listed here.) It is likely that, of the 1879-dated Flowing Hair Stellas, about 15 were struck in 1879, and the rest in 1880.

Precise mintage numbers are unknown, it is thought that approximately 425+ pieces were struck.

Some of the finest Stella specimens are housed in the National Numismatic Collection in the Smithsonian Institution. Others are in private collections, and cross the auction block from time to time.

Offered here is a PR58 example, slightly rubbed on the high points and a touch in the fields, yet with undeniable reflectivity in pools around the peripheral elements. Saturated honey-gold color. A great coin.
Estimate $50,000 - 75,000.