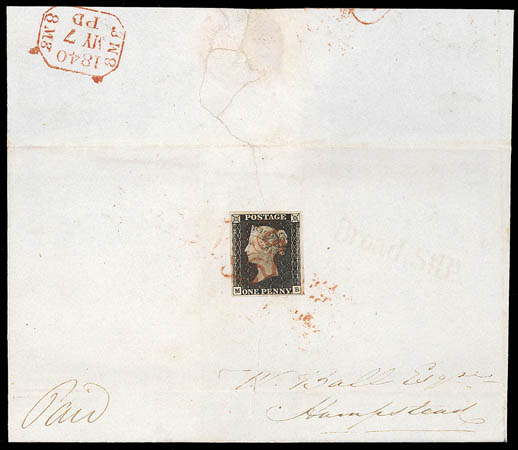 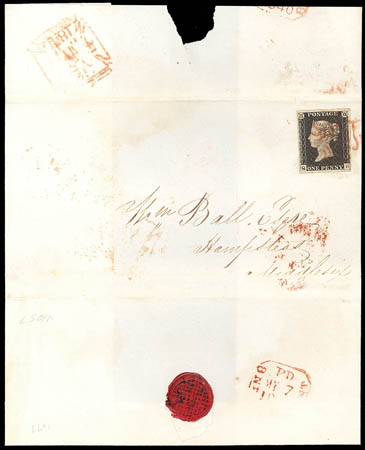 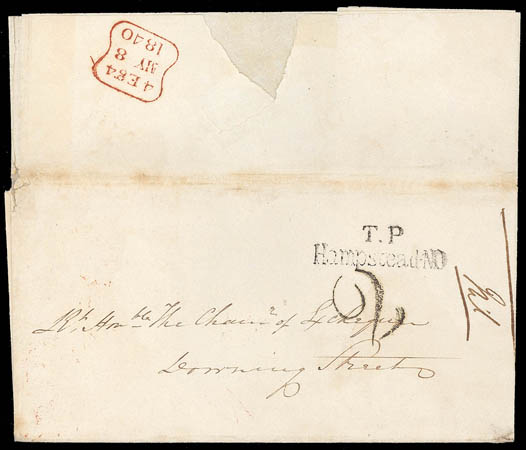 Accompanied by a Third Folded Letter sent by William Ball, the day after receiving the above covers, to the Chancellor of the Exchequer in London enclosing the two letters, with letter which reads in full…
Hampton, May 8th, 1840 -

Sir,
Enclosed I have taken the liberty of forwarding the covers of two letters I have just received with the adhesive wafers attached to them. To a person fraudulently inclined the wafers appear to be easily transferred from one or more letters thus defeat[ing] the object wished & considerably injures the Government.
I am Sir -
Your Most Obet Hble Srt
W. Ball

Cover with "T.P., Hamstead NO" straight line postmark and "2" pence rate handstamp (since the franking had been withdrawn as a part of the Rowland Hill reforms, the Chancellor's office had to pay the unpaid collect penalty rate), red "My 8, 1840" receiving boxed handstamp on backflap, overall Very Fine, May 7th Usage of the 1d Penny Black Catalogs £20,000 Each in the Stanley Gibbons Specialized Catalog. Scott No. 1.
SG No. 2    Estimate $7,500 - 10,000.

The bank note companies that produced the first postage stamp for both England and the United States at first did not understand the problems associated with gumming newly made paper to be used in stamp production. If the paper and the sizing was not allowed to age before applying the gum, the gum soaked into the paper's fiber, reducing the adhesiveness of the stamps, causing many of them to fall of the covers which they were attached. Ignoring the fact that these stamps had been cancelled, Ball complains of the two enclosures of which the stamps are still only partially attached to their covers.