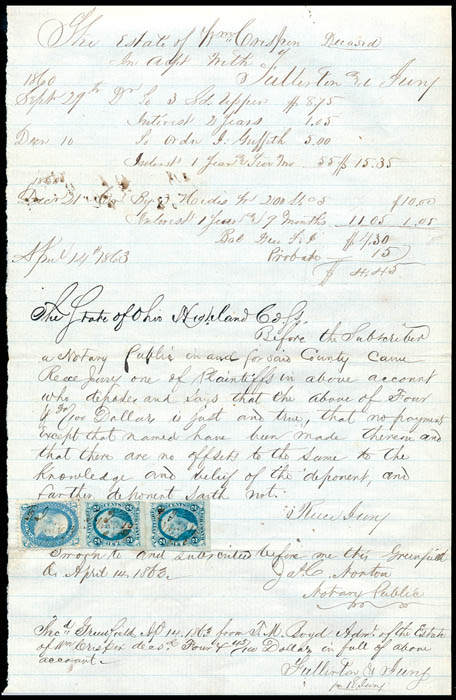 The Revenue Stamp Tax Act of 7/1/1862, effective 10/1/1862 required that almost all legal and commercial documents, as well as some other items (e.g., playing cards, photographs), be taxed. Revenue stamps were to be affixed to show payment of the tax. There was a strong incentive to pay the tax because contracts, promissory notes, and such were not considered legal documents without the stamps. Until 12/25/1862, the law stated that a particular type of document, like a bank check, could only bear a revenue stamp with the particular article, Bank Check printed on its face. After that date, revenue stamps could be used on any type of document, except for the Proprietary stamp.

Postage stamps were never valid (legal) to pay revenue tax, or vice versa, because the money went to two different Federal departments for distinctly different purposes. Nonetheless, due to the unavailability or revenue stamps or other reasons, postage stamps, particularly the 1861 Series, were often used, and were generally accepted as proof that there was no attempt to avoid payment of the tax.
http://www.rumseyauctions.com/