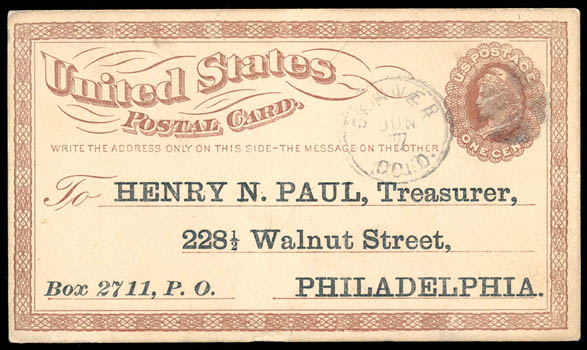 A SCARCE PAIR OF COLORADO TERRITORY USAGES, THE JUN. 7TH EXAMPLE BEING THE EARLIEST RECORDED TERRITORIAL USE OF THE 1873 1¢ POSTAL CARD.

The June 7th card is featured in "A Contemporary Account of the First United States Postal Card, 1870-1875" by Charles A. Fricke on page 68 as a possible first day usage for Denver. As a matched pair, both of these cards were written by "Jas. Marshall Paul," most likely a relative of the addressee, and indicate that Paul may have carried the pre-addressed cards in his travels from Philadelphia to Colorado Territory. The Jun. 7th Denver card notes his arrival, then states "No shipment from mine this week - Will shut down probably for repairs - Will write from Fairplay.".