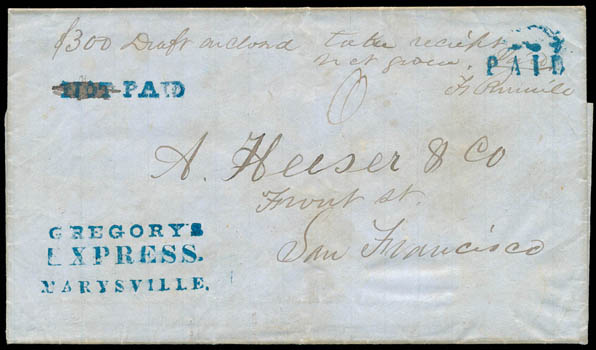 Gregory's Express, Marysville, blue straight line handstamp and "Not Paid" with "Not" deleted in manuscript and additional blue "Paid" straight line handstamp at top right of 1852 folded letter to San Francisco, manuscript notation by Gregory's agent in Marysville, Frank Rumrill, indicates that "$300 Draft enclosed take receipt [in San Francisco] / [receipt] not given [in Marysville] Paid./F. Rumrill", letter is headed "Marysville May 29 /52" and reads in part…Inclosed please find Draft for three Hundred. I wood have sent you four only I am oblige to By a Cow for witch I will have to pay 10 & 25 at Least. I also find that we will have to have a mutch Larger stock of provition than I thort as thair ar a great many miners on arigon Crik who all want to By of us., Very Fine and rare, ex-Myerson.
Estimate    $750 - 1,000.

Gregory's Express operated in California, between San Francisco and New York, and even beyond the United States from February of 1850 to May of 1853. Gregory's Express was in direct competition with Adams & Co. from the start and with Wells Fargo & Co. after July of 1852. Joseph W. Gregory gave up the express business and returned to the East on May 1, 1853.

After the demise of Gregory's Express, Frank Rumrill allied himself with Wells Fargo and established Rumrill's Express between Marysville and Downieville and eventually on to Gibsonville. Rumrill's Express was in competition with Langton & Co.'s Express and subsequently Langton & Bro.'s Express, which were allied with Adams. Frank Rumrill sold his Yuba River business to what was by then Langton's Pioneer Express and returned to the East to marry the sweetheart he left behind in 1855.