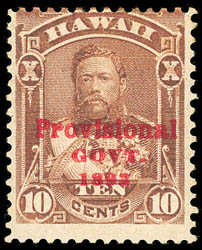 A HANDSOME EXAMPLE OF THE 1893 10¢ KALAKAUA RED OVERPRINT ERROR.

Most of the examples from the only sheet of fifty produced, are centered into the perforations at top. It is believed that eight examples were destroyed from the 1906 San Francisco earthquake and that less than forty examples are in existence.