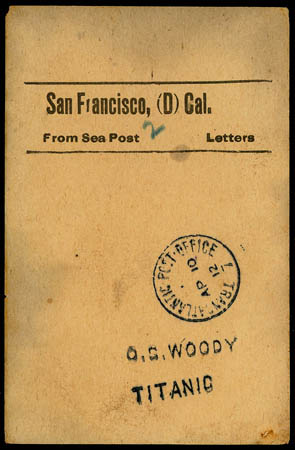 AN OUTSTANDING POSTAL RELIC FROM THE FAMED R.M.S. TITANIC.

Facing slips were commonly used by postal clerks for sorting the mails in order to identify a particular packet of mail according to its city of destination and/or mode of transportation. Oscar Scott Woody, mail clerk on the Titanic, prepared a quantity of facing slips in advance of sorting the mails. Each bears the "Transatlantic Post Office 7" cds dated on April 10th 1912, the day the Titanic sailed from Southampton, plus handstamps with the ship's name and postal clerk O.S. Woody's name to show that he had been responsible for sorting that particular bundle. On the night of April 15th 1912 when the Titanic was sinking, Woody had a quantity of these facing slips, as well as his letter of assignment, in his breast pocket when he disembarked the Titanic into the freezing waters with only a cork life preserver. Remarkably, these paper items survived significant damage because the life jackets kept most of the upper body above water.