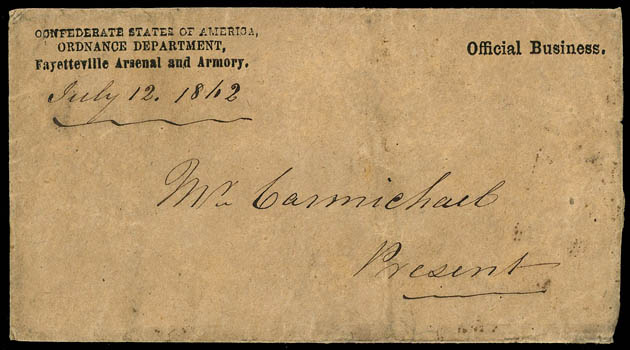 Confederacy, Confederate States of America, Ordnance Department, Fayetteville Arsenal and Armory, semi-official imprint on homemade brown cover hand delivered to "Mr. Carmichael, Present"; docketed "July 12, 1862" with enclosure headed "Fayetteville July 2 1862" from J.G. Shepherd to Major P. Mallett stating "Mr. Archibald Carmichael of this country has a contract to supply lumber to the Confederate States at the Arsenal here-which is not yet fulfilled. It is a large contract and important to the Government. Is he exempt? Be pleased to answer me in 'yes or no' by the next mail.", on the bottom in a different hand is "He is exempt- Your Obt. St-Major Peter Mallett, Maj. AA Genl P.C.A.", also a pencil notation on the verso regarding the specific job and signed by (Capt) William Bell (Builder)., Very Fine, The only recorded example of this imprint and the CSA listing example.
C.S.A. Catalog No. WD-OD-13    $500.

This was obviously sent to Carmichael so he would have proof of his exempt status. Mallett was born in NC, enlisted and was commissioned a Capt. 5-16-61 in Co. C NC 3rd Infantry. He was promoted to Major 5-23-62 and Asst. Adj Gen to serve as Commandant of Conscript.