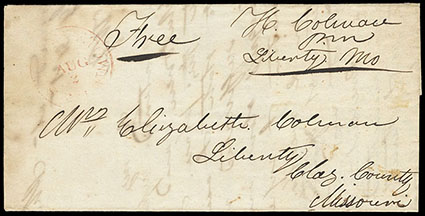 In the letter, Postmaster Coleman tells his wife to inform William Hayes, editor of the Far West newspaper in Caldwell County, that he "has purchased his paper and type". The town of Far West had been established by the Mormon in 1838 as their capital after being expelled from both Missouri's Jackson and Clay Counties. The paper was official Mormon organ. In 1839 violence flared between the Mormons and the locals. The State Militia was called out, destroying the town and seizing the Mormon leaders for trial. Joseph Smith escaped and fled to Illinois. He apparently sold the paper to Coleman while he was in that State. The steamboat Coleman was taking home had run aground on the Ohio River on account of low water.