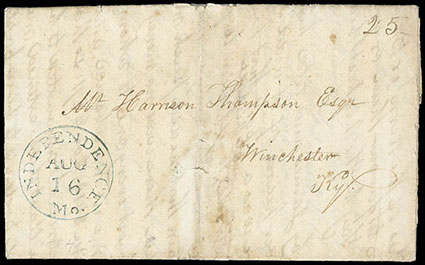 Independence Mo. Aug 16, clear strike of blue cds and manuscript "25" rating on folded letter datelined "Linnland Jackson Cty August 12th 1839" to Winchester Ky., the writer comments briefly on the sale of Mormon Lands after their expulsion from Jackson County: "…I have bought 70 acres of land joining one of the tracts I told you I had bought of the Mormons.", he also comments on having to sell a slave in Kentucky to raise cash: "…he did push me and both told the people there was no money coming to me in Ky. and almost every one to whom any thing was due pushed me in my absence, and sold a negro girl that cost me $414 for $291…"; file fold flaw, F.-V.F., ex-Alexander.
Estimate    $200 - 300.