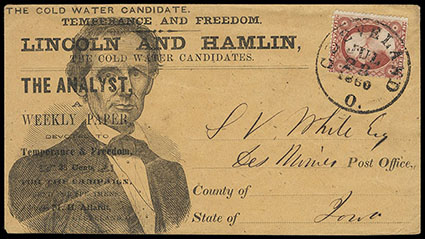 AN EXCEPTIONAL EXAMPLE OF THIS RARE LINCOLN AND HAMLIN "THE COLDWATER CANDIDATE" 1860 CAMPAIGN DESIGN OVERPRINTED WITH TEMPERANCE AND FREEDOM CAMPAIGN SENTIMENTS.

Temperance advocates embraced Lincoln as their choice for president in the 1860 election, naming him the "Cold Water" candidate. Envelope designs using this temperance theme are rare, and they were all published by M. H. Allardt of Cleveland. The Analyst newspaper was started in 1858 by J. A. Spencer, who apparently sold it to M. H. Allardt before 1860. Including this cover, we are aware of only four examples of the AL-36 design, but no other examples with the additional temperance overprint on face.
Complete Images.