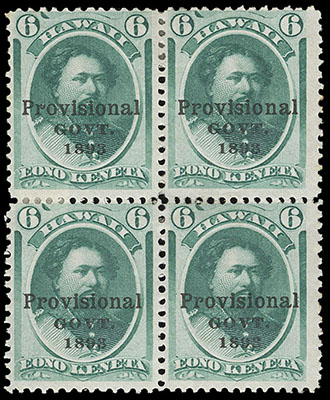 ONE OF ONLY TWO RECORDED BLOCKS OF FOUR OF THE 1893 6¢ PROVISIONAL GOVERNMENT ERROR OVERPRINT.

Sold in 1979 for over $80,000, this block was from the only sheet of 50 of these stamps ever produced. The sheet was purchased by the Honolulu Postmaster General Jos. M. Oat. Six of the known examples are used and a number of mint examples were destroyed in the 1906 San Francisco earthquake. This lot includes a photocopy of a 1904 letter from J. H. Makins to Percy T. Morgan regarding the purchase of these errors and a photocopy of a Makin & Co. letterhead affidavit from Postmaster General Oat guaranteeing that only one sheet was produced.
http://www.rumseyauctions.com/