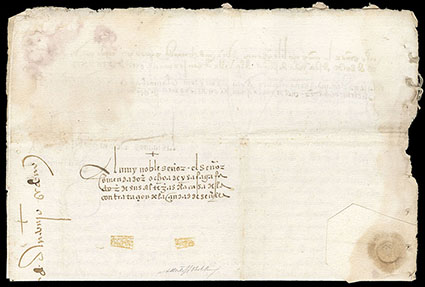 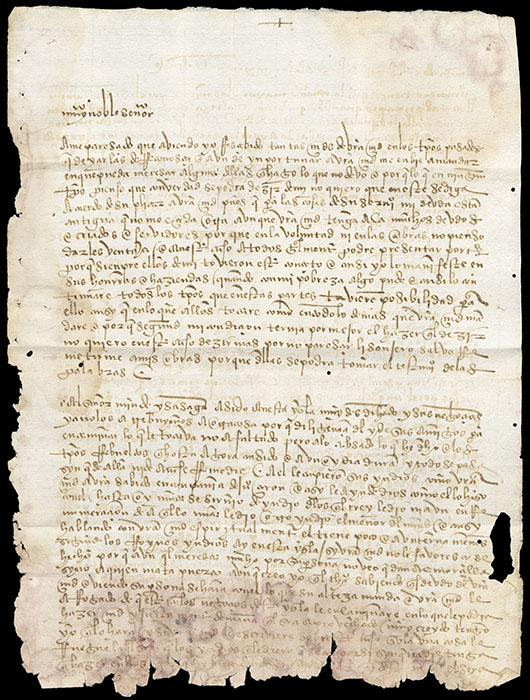 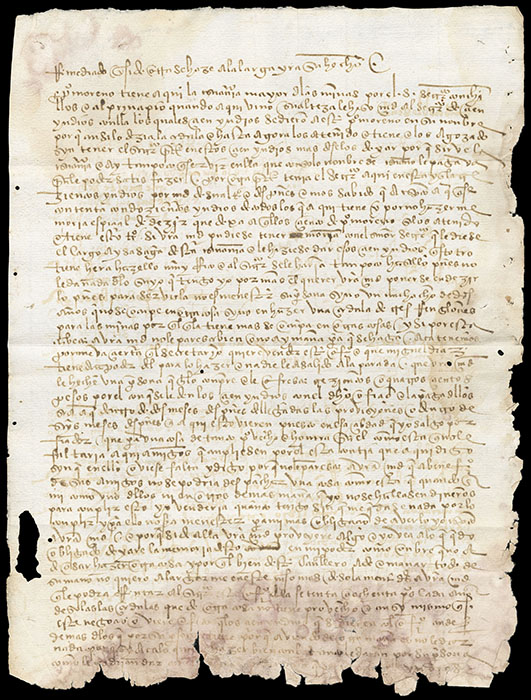 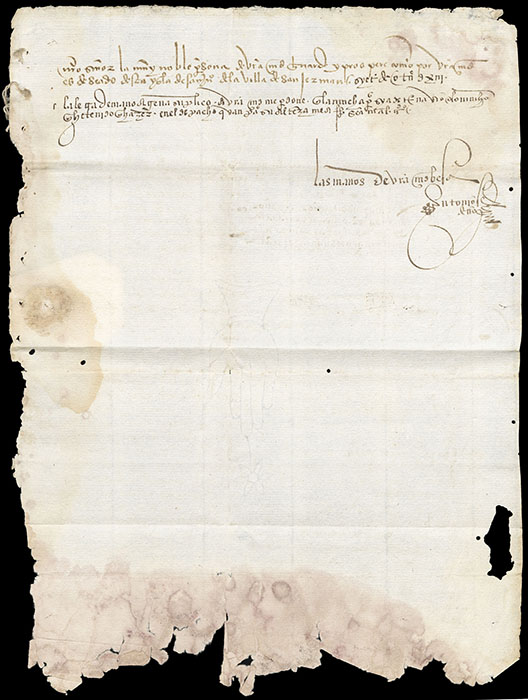 Puerto Rico, San Germán (Puerto Rico), October 7, 1513, cover with intact lengthy three pages letter from Antonio Sedeño, accountant of the Royal Treasury in Puerto Rico, to Commander Ochoa de Isásaga, who was at the time chief official of the Supreme Council of the Indies in Spain, letter with interesting content regarding many notable persons, the use of the native Indians and the requesting of hiring a scribe, with letter datelined "1513 October 7, San German" in reads in part…

Noble Sir,
I have received so many favors in the past that I only deserve a bit…I am begging your Holy Mercy, so that things of my service debt are so old, I have no other choice, but to relinquish although your Holy Mercy has here many servants and maids. Sir Martin de Ysasaga has been very unhappy on this island, and his business, we don't attribute to another thing because (of) his diligence and his friends guidance what he was owed never failed, but has caused what I said in these tempestuous times, until now and to this day are enduring without being fixed here or there. He was given his natives, as your holy grace would have known, sent with Juan Ciron, and may god help him as he has to this day, the Indian the king gave him never worked out, nor the remuneration of with he was never given another Indian…Pedro Moreno has the best scribe from the clerk's office by way of the Sir Secretary Conchillos, and at the beginning, when he first came here, your highness gave the secretary 100 Indians of which 100 were given to this Pedro Moreno on his name because that is what the statement said and he has them to this day without having secretary part of the 100 Indians. More say you should leave them because it serves the scribe and there are so few that can serve as scribe that with which only a name of a writer was paid in order to satisfy. On the other hand he had a secretary here on this island, 300 Indians by mercy of your holiness. After we have known that has been written here that has bestowed with 200 Indians of all that is here, and by not making a mental note of saying that those 100 of Pedro Moreno, if he has had them at this time. If your Holy Mercy would recollect about the senior secretary that you encharged gave to Ysasaga from this writing that made him give the 100 Indians and from this will make him very rich and he treats the secretary very badly, he doesn't share anything… Miguel Diaz has the power to stop (him from) doing it and none has left the stop. May your Holy Mercy send a good person that you buy and offer 300 or 400 pesos and 100 Indians that go with the official statement that will be here in 2 months after the arrival of the provisions, or after 6 months of holding the position in this city and I will be (leave as) creditor and that of a thing of such benefits and honor for him like this would be no lack of friends here that would help complete this… And because good from this gentleman to Ponce De Leon, but he ended up being removed and called to court emanate all from your hand, I don't want to distance myself from this case more, to only say to your holy grace that he will be able to rent the secretary this office for 70 or 80 persons each year, from only the documents, and moreover if this deal could be done. If this deal happens it will be a benefit, and if the 100 Indians that are offered with the position should be on top of what the person has, because otherwise it is giving nothing, because if you want to do well with him so much given to his person as he deserves.
God our Father to your very noble person of your Holy Grace, be well and prosperous as your Holy Grace desires. From this island of San Juan, from the villa/ home of San Jerman, 7th of October 1513

p.s. I beg that your Holy Mercy forgives, the handwriting and all the work I had to do in a hurry to send this dispatch, going to your highness that will not put me in a bad state. (not think poorly of me)
I kiss the hands of your Holy Mercy,
Antonio Sedeno

The author of the letter Antonio Sedeño (died 1538) was a Spanish conquistador and the governor of Trinidad between 1530 and 1538. Before his appointment to his position in Trinidad, Sedeño had been the Royal Treasurer of Puerto Rico. He obtained a letters patent from the King appointing him as the Captain and Governor-General of Trinidad on July 12, 1530.

Mention within the letter, Juan Cerón was a Spanish Conquistador and the second and fourth governor (1509-1513) of Puerto Rico when the island was still called San Juan. As governor of Hispaniola in 1509, he dispatched Cerón to Puerto Rico with the title of Alcalde Mayor to replace Juan Ponce de León.Ponce de León had just begun the conquest of Puerto Rico the previous year, and his replacement produced much dissension among the few settlers. In 1511, under pressure by Colón, Cerón was posted as governor and Ponce de León left for his first adventure in Florida.
http://www.rumseyauctions.com/