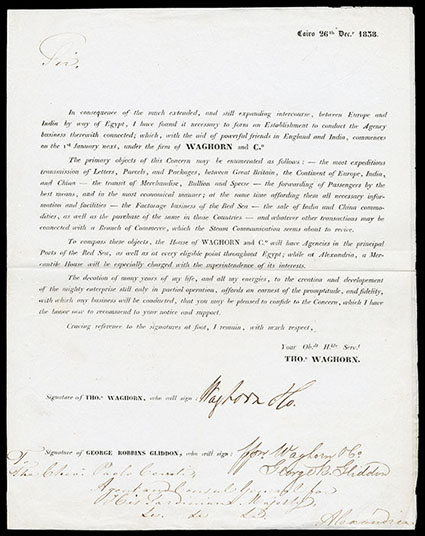 Thomas Fletcher Waghorn was a postal pioneer who developed a new route from Great Britain to India, which reduced the journey from 3 months / 16,000 miles via the Cape of Good Hope, to 35-45 days / 6,000 miles overland. He operated with such speed and efficiency that the British Post Office directed mail to his service and his business began to flourish. He set up an agency in Cornhill, London, for conveying post, and passengers, to India via Egypt. Between 1835 and 1837, he lived among Arabs in the desert and laid the foundations for the overland route across the desert from Cairo to Suez. This involved building rest-houses and supplying guides, boats, horses and carriages for travelers. By 1840, the P&O set up in direct competition with him that was backed by the British government, which led to the failure of his overland route.