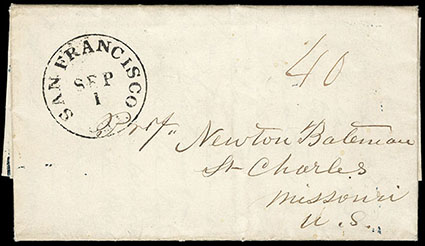 Stockton Aug. 12th 1849, heading on folded letter mailed three weeks later with San Francisco, Cal., Sep 1 large cds and purple manuscript "40" rate marking, letter (2 pages) is from a prospector to his brother back home, letter states in part "I arrived [back] at this place yesterday after a journey of unprecedented toil… some two hundred and fifty miles below with a Detachment of Dragoons who struck for the mountains at a point where the Indians a short time since committed murder on Americans who attempted to penetrate their country for gold at which point it was represented to be very rich and I thought it a good opportunity to get where nobody else could but… owing to it taking more time than was anticipated the animals broke down, we got out of grub, and were forced to return… This place has sprung almost in a day, fourteen ships are lying in the harbor and trade and everything is very brisk… Gold continues to be obtained in about average quantities, but it is now as ever much of a lottery, some make none while others get a fortune in a short time", Extremely Fine, an early miner's letter written nearly a year before Stockton had a Post Office, ex-Kutz.
Estimate    $400 - 600.