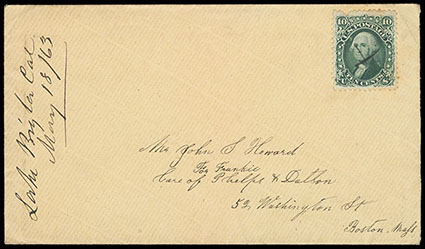 Nevada collectors believe this cover was sent from what is today's Glenbook, Nev. area. In 1861, Lake Bigler, Lumber Co. was established there to furnish lumber to the Comstock Lode mines. In 1863, the Lake Bigler Toll road was completed at nearby King's Canyon to Friday's Station, Nevada Territory.

John Bigler, California's Third Governor 1852-1858, led a rescue party into Lake Valley in the winter of 1852 to bring out a snowbound group of emigrants. The lake was called "Bigler" in his honor. The Washoe Indian "Tahoe", meaning deep or blue water became popular in the late 1860s and 1870s.