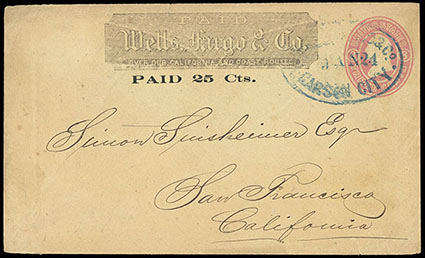 Operated by Wells, Fargo & Co. from August 11th 1862 to 1865. They carried mail and news from Virginia City to Placerville. From Placerville via railroad to Sacramento then by boat to San Francisco. In addition to the adhesive Pony stamps, there were printed envelopes "Paid 25 cts" which were started in 1863. This was for Special Delivery and included "Rapid Letter Service" along the "Pony Trail" to San Francisco.