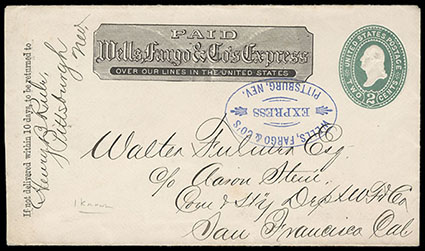 THE ONLY RECORDED EXAMPLE OF THIS WELLS, FARGO & CO. PITTSBURG NEV. MARKING.

The camp at Pittsburgh began to grow in the mid-1880s following the initial discoveries in 1878. A townsite was laid out in Crum Canyon at the mouth of Hilltop Canyon. The mines were located about a quarter mile up Hilltop Canyon and a tramway to the mill was constructed. Between 1886 and 1887 $126,000 in gold was produced and Pittsburgh soon had a population of 100 and about 30 buildings were crowed into Crum Canyon. In 1892, production dropped significantly and population fell to about 20, all miners. All the business closed and the miners had to go to nearby Dean for supplies and a drink. The mines and mill were abandoned in 1906. Today, only one old shack still stands.