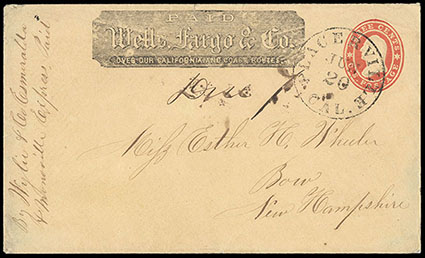 ONE OF ONLY TWO RECORDED WYLIE & CO. EXPRESS USES, THIS BEING THE ONLY RECORDED EXAMPLE OF WYLIE & CO.'S ESMERALDA & MONOVILLE EXPRESS FRANK.

Wylie & Co. operated an express in the Esmeralda District of Nevada during 1861. Based on the two surviving covers that were carried by Wylie, the letters from the Esmeralda District connected with the U.S. mail at Placerville and Wells, Fargo & Co. in Carson City. This indicates that the route from the Aurora area ran into both California and Nevada Territory. This cover was carried by Wylie to Wells, Fargo & Co. at Esmeralda. Wells, Fargo then placed it into the U.S. mails at Placerville Cal. for delivery to Bow, N.H.