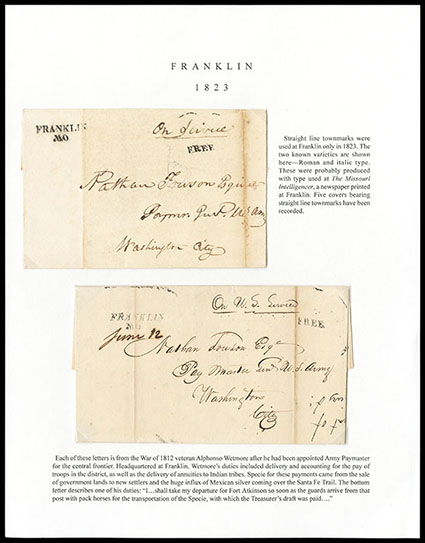 Straightline postmarks were used at Franklin only in 1823 in two known varieties shown here: Roman and italic type. These were probably produced with type used at The Missouri Intelligencer, a newspaper printed at Franklin. Each of these letters is from the War of 1812 veteran Alphonso Wetmore after he had been appointed Army Paymaster for the central frontier. Headquartered at Franklin, Wetmore's duties included delivery and accounting for the pay of troops in the district, as well as the delivery of annuities to Indian tribes. Specie for these payments came from the sale of government lands to new settlers and the huge influx of Mexican silver coming over the Santa Fe Trail. The bottom letter describes one of his duties: "I …shall take my departure for Fort Atkinson so soon as the guards arrive from that post with pack horses for the transportation of the Specie, with which the Treasurer's draft was paid…".