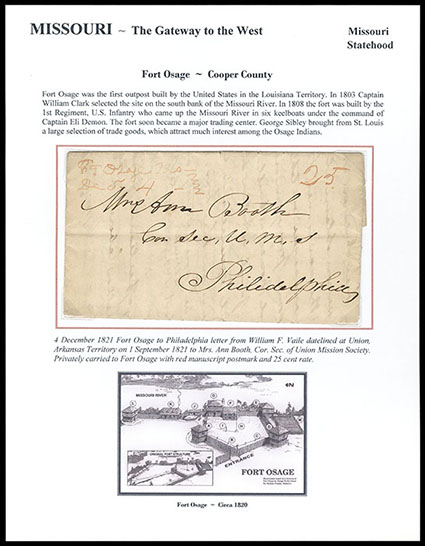 "Ft Osage Mo - Decr 4", red manuscript postmark with matching "25" rating on 1821 folded letter to Philadelphia Pa., datelined "Union, Arks Ter. Sep 30, 1821" and written by William F. Vail who was missionary to the Osage Indians at Union Mission in Arkansas Territory (present day Oklahoma), carried privately to Fort Osage and deposited in the mails there, letter thanks the recipient for clothing and other supplies for the mission and says that a school is under construction, even though they have been able to obtain only three children because of an ongoing Indian war. He concludes by saying: "Be not alarmed for our safety…though the Indians prowl around the forest in quest of each others blood, we dwell securely", Very Fine and rare, ex-Alexander.
Estimate    $750 - 1,000.

THIS IS THE EARLIEST RECORDED LETTER POSTED AT FORT OSAGE, AND THE ONLY LETTER THAT ENTERED THE MAILS THERE DURING THE TIME THE FORT WAS OPERATING AS A GOVERNMENT INDIAN FACTORY.

Fort Osage was the first outpost built by the United States in the Louisiana Territory. In 1803, Captain William Clark selected the site on the south bank of the Missouri River. In 1808, the fort was built by the 1st Regiment, U.S. Infantry who came up the Missouri River in six keelboats under command of Captain Eli Demon. The fort soon became a trading center. A post office was established at Fort Osage in 1820.