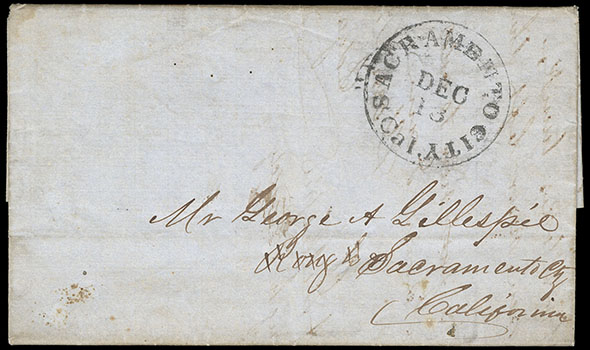 Sacramento City, Cal., Dec 13, large serifed cds (type 1) with no rate marking on folded letter addressed locally and presumably handed to the recipient in exchange for two pennies or the equivalent, letter (2-1/2 pages) is from a man to his brother and headed "Placerville Dec 10th 1850", letter mostly describes the whereabouts of various mutual acquaintances, but the writer also mentions "I wrote you soon after your first letter came to hand… and directed to Rough and Ready, Blue Ravine. If you have not received it, you will find it at some express office… I am holding forth in this place under the sign of Curtis and Gillespie… my partner has gone south to open a farm… I mined until I came to his place in July with little success, however it was partly owing to myself that I done no better. I was after the big chunks and disregarded the little ones. We must all live and learn", Very Fine, the only recorded Sacramento drop letter in the 40¢ rate period.
Estimate    $100 - 150.

Since Placerville had a Post Office when this letter was written, the sender must have had someone or possibly some express carry the letter to Sacramento for mailing. The unmarked 2¢ rate was the 1845 rate for a drop letter. That rate remained in effect even on the Pacific Coast with its other higher rates until all the old rates were superseded by new rates effective July 1, 1851.