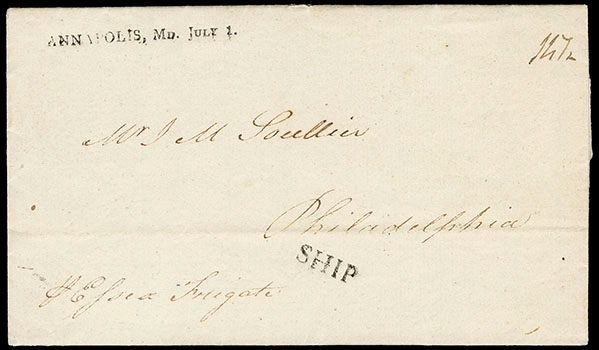 THE ONLY RECORDED EXAMPLE OF THIS "ANNAPOLIS, MD." STRAIGHTLINE POSTMARK.

This sailing was a prelude to the War of 1812. Anglo-American relations had been worsening since the 1790s, due to harassment of American merchant vessels engaged in "neutral trade" with France during Britain's war with France.

In 1811 President Madison recalled the U.S. Ambassador to Great Britain, Thomas Pinckney, and replaced him with J. Smith as Charges des Affairs — a position of lower rank. The 46-gun U.S. Frigate Essex was sent to England to transport Pinckney home to Annapolis. She put into Cowes on the Isle of Wight, just offshore from the entrance to Portsmouth Harbor, to where Pinckney is reported to have traveled from London and met for a long conference with Smith.

This letter was carried on the last voyage of the Frigate Essex to Europe before the War. She took 23 prizes during the war before being trapped in the harbor of Valparaiso and captured by the British.