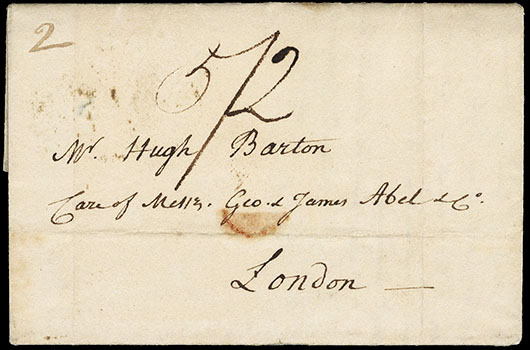 Cartel ship advertised for Madeira at 25¢ per letter as fee to Captain. From Poulson's American Daily Advertiser, Philadelphia, Nov. 19, 1813, p. 3: "Letter bags for England and Ireland will be forwarded on Monday Evening next the 22d inst. from the Marchants' Coffee House, by a vessel for Madeira from whence they will be sent to those places by a respectable house at Madeira". London's Foreign Letter Office processed mail to and from the European Continent, letters handled by this office were entitled to a 2p deduction from the published rates.

Privateering threatened packets to New York, so service was halted in March 1813. By GPO notice of 11 March 1814: "HM pkts having ceased to go to NY you are to cease receiving letters with pkt postage to the USA. Only ship letter bags may occasionally be sent." Britain announced the blockade of Delaware River on 5 February 1813, New York Harbor on 26 May 1814, and Boston Harbor on 25 April 1814.