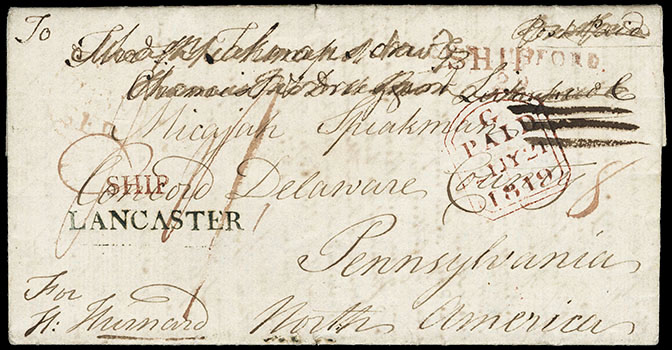 ONE OF ONLY TWO RECORDED COPE LINE "LANCASTER." NAME-OF-SHIP STRAIGHTLINE PURSER MARKINGS, THIS BEING THE ONLY STRIKE IN BLACK.

Thomas P. Cope's ships operated from 1806, and on a monthly schedule between Philadelphia and Liverpool from 1822 to 1872. Often termed the "Philadelphia Packet" or "Liverpool Packet," none of Cope's voyages were under mail contracts. The 383-ton Lancaster was the first ship in Cope's Philadelphia-Liverpool line with Thomas Potts as master.

Letters from the United Kingdom to overseas destinations via the Falmouth packet required compulsory prepayment of the packet rate in addition to the U.K. inland rate from posting via London to Falmouth. However, iif the sender chose to instruct the post office to send by private ship from a particular port, the only compulsory part of the postage was the inland rate via London to the port of exit as in the case here.