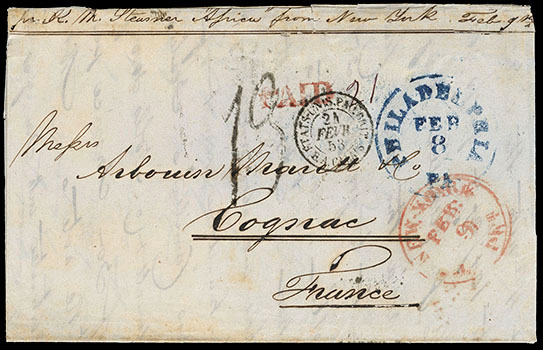 THE ONLY RECORDED COVER FROM PHILADELPHIA DURING THIS RETALIATORY PERIOD.

Due to miscommunication, U.S. Postmaster General Hubbard thought that double sea postage was being charged on letters to France carried via American packets in the British open mail. This had been the case, but Hubbard was unaware that the French had already corrected the inequity by lowering their rate to the U.S. from 15 decimes to 13 decimes. Hubbard's new rate was 21 cents regardless of whether a letter was carried by British or American packet. Hubbard's misapprehension was corrected, and the retaliation was suspended after only 17 days.